Next up for Kim, Khloé and Kourtney will be Kardashian Sun Kissed, a five-stockkeeping-unit sunless tanning system exclusive to Ulta that’s due in April. 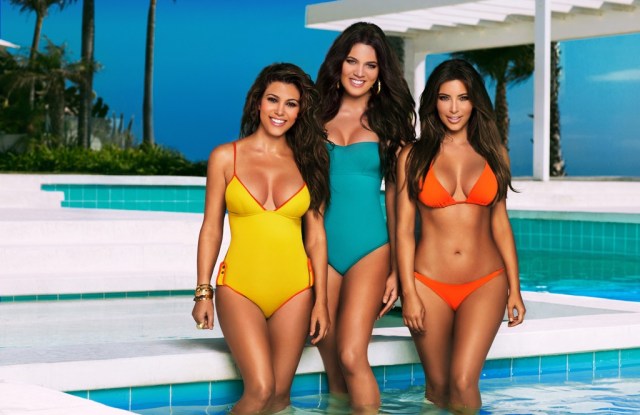 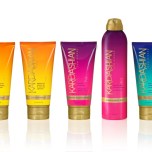 Kim, Khloé and Kourtney Kardashian may be building a beauty empire, but they’re the first ones to admit their experimental styles have led them to try a few questionable looks over the years.

“The frosted eye shadow I wore in the sixth grade is definitely not something I’d try to wear again,” Khloé said during a phone interview with her sisters for their new sunless tanning line with New Sunshine LLC. “Why would someone ever let me go to school with blue eye shadow? I should ground one of you guys for that!”

“Years ago, more is more was my motto — like lots of lashes on top of a smoky eye,” Kim admitted. “I love makeup, but I’ve found different ways of contouring and highlighting.”

“When I was younger, I’d always wash my face at night, but I wasn’t so passionate about my skin-care regimen,” Kourtney chimed in. “Now, I’m so OCD about it. I’m much more careful about going to bed with a clean face and putting my creams on.”

All grow passionate when talk turns to Kardashian Sun Kissed, their five-stockkeeping-unit sunless tanning system, which is an Ulta exclusive due in April.

“I think tanning has really been a way of life for all of us, living in California,” Kim said. “Especially, more recently, the need for sunless tan. When I travel, the one thing that makes me feel alive whether or not I have makeup on is a tan, especially in my face. When you travel, you can’t just go lay out. I do like regular tanning because I have psoriasis, and the tanning beds are particularly good for that. Every time I put sunless tan before, it wouldn’t be even — so we wanted a system that was really easy but yet is a full system.”

The products are priced between $12.99 and $19.99. Step one is using either Body Exfoliator or Color Maximizer, $12.99 each; the second step is choosing either Instant Sunless Lotion or Instant Sunless Spray, $19.99 each, and the final step is applying Tan Extender with Bronzers. The bronzer is not activated by the sun or ultraviolet rays, but will continue to make the skin darker after the sunless tanner is applied, noted Kim.

“[We] came up with something that is still good for your skin and healthy for you; everything is paraben- and sulfate-free,” Kourtney said. “We love beauty and fashion, but making sure we’re taking care of our bodies is crucial to us.”

While the sisters and New Sunshine refused to comment on sales figures, industry sources estimated that Sun Kissed could do $10 million at retail in its first year on counter.

All three of the Kardashians are maestros at using their media platforms to drive sales of their products, particularly via social media. At press time, Kim had 17,527,538 Twitter followers, while Khloé had 8,081,372 and Kourtney 8,392,833.

“Social media and our shows are such a great tool, for any business,” said Kim. “I’ve recently gone to a couple of social media conferences, and that’s all they talk about — how amazing the outreach can be, and what a great focus group you can get from social media. It allows us to be interactive. When I was creating my fragrance, I couldn’t decide on the color of the bottle, so I asked my Twitter followers, and I used the response that everyone was giving me.”

“It’s fun to hear through social media what people are asking us for and looking for,” said Kourtney. “I’ll see this trend that everyone loves this one certain lip color, or things like that. It’s so crazy in today’s world that you get that instant feedback. For us, when creating these products, it allows us to give people what they really want and what we really want.”

“We’re definitely indulging in the [categories] that we’re excited about and believe in,” said Khloé. Kourtney — now the mother of two, Penelope and Mason — said she has her eye on doing children’s products (something Kim, who is pregnant with her first child, might also find handy).

The sisters noted that after products are seen on their shows — which, over the years, have included “Keeping Up With the Kardashians” and “Kourtney & Khloé Take Miami” — they’ve often see corresponding sales spikes. “We have our makeup line, fragrances and now tanning, and you’ll see those things when the cameras are following us around, especially to creative meetings,” said Kim. “The audience likes to see how the design all comes together from beginning to end. Also, we get our products early, so by the time it airs, the new products are in stores.”

The Kardashians declined comment on the legal wrangling happening with their Khroma Beauty color cosmetics line. Earlier this month, U.S. District Court for the Central District of California Judge Audrey Collins issued a preliminary injunction blocking Khroma Beauty, which stems from a trademark dispute involving Lee Tillett Inc., an Altamonte Springs, Fla.-based company that sells a line called Kroma Makeup, and Santa Monica, Calif.-based Boldface Licensing + Branding, holder of the license for the Kardashian makeup brand. Chroma Makeup Studio in Beverly Hills had also pursued an injunction against Khroma Beauty in the U.S. District Court for the Central District of California, but was denied by Judge Paul L. Abrams.