The “Call Me Maybe” singer is the first celebrity spokesperson for any products under the Burt’s Bees umbrella. 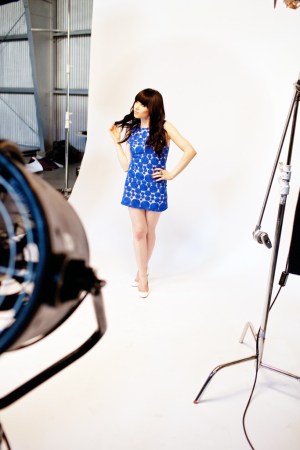 L.A.’s Booming Body Care Needs for Summer 2021 and Beyond

Jepsen has been familiar with Burt’s Bees for as long as she can remember because her mother was somewhat of a fanatic about the brand and gave her its lip balms as stocking stuffers. She said she was drawn to the scents of Güd’s Red Ruby Groovy lineup of shampoo, conditioner, lotion and body wash, each priced at $6.99. The Red Ruby scent — Güd’s fifth — consists of grapefruit, black currant and mandarin top notes; apple, papaya and thyme middle notes, and a musk base note.

“I’ve always been attracted to things that smell feminine,” said Jepsen, 27. “I don’t mind if my boyfriend wants to get a little closer than usual, and I like things that are energizing. This is a combination of both. I feel very womanly, and it makes me sort of ready to take on more.”

Earlier this month, Güd shot the Red Ruby Groovy print campaign, which will break in the May issues of Glamour, Cosmopolitan and Allure, in Los Angeles. One of the two images from the shoot has a Fifties vibe and was photographed in a red shower with Jepsen wearing a tutu and red bikini top. The other has a Seventies vibe with Jepsen in a blue dress posing against a white background.

“It sounds strange, but in actuality it felt really fun,” Jepsen said of being photographed in the red shower. “For a second, I forgot the camera was there. I was like, ‘This is ridiculous, but I love it.’ It felt like me. It didn’t feel like something outside my comfort zone. I’m a girl who, even at age 90, will love tutus.”

Jepsen’s “Call Me Maybe” turned into a viral sensation when U.S.’ Olympic swim team lip-synced the song in an online video shortly before the Olympic Games in London. It is unlikely Güd will repeat the success of that video, which has been viewed almost 11 million times on YouTube, but it will definitely leverage Jepsen’s digital presence with social media initiatives promoting Red Ruby Groovy.

The Red Ruby Groovy campaign comes along as Jepsen is attempting to build upon her recent success and show she’s more than a sugary sweet pop songstress. She just released the single and video for the song, “Tonight I’m Getting Over You.” “As much as I do have that lighthearted side to me, there’s another side of me that has experienced heartbreak. If there’s one thing that’s gotten me through it, it has been a good anthem and I always picked my anthem for a particular breakup, and I hope this can be that for other people,” said Jepsen.

Jepsen isn’t idly standing by waiting for fans to listen to the song. She’s on a tour with Justin Bieber heading through the U.K. this month and next, and is planning to headline her own tour soon in Canada, Japan and the U.S. Meanwhile, she writes song after song. “I began writing when I was 17 when I first got a guitar from my mom,” said Jepsen. “When I look at what I want to continue to do, it’s to go deeper into that world. It’s my greatest passion— even above the singing.”

Despite fierce competition — Yes To Inc. is introducing Yes to Grapefruit products in March — Berklich asserted Güd has found an audience. Güd is stocked at 20,000 retail doors, including Target, CVS, Walgreens and Wal-Mart. When Güd hit shelves, industry sources estimated Güd would generate $15 million in 2012, and they anticipate it will generate at least that much this year.