As natural deodorants gain popularity, formulators have added in AHA’s and other acids to exfoliate and stop odor.

Beauty and personal-care brands are creating a new kind of clean deodorant.

To do it, they’re looking to skin care—especially Alpha Hydroxy Acids—for inspiration. 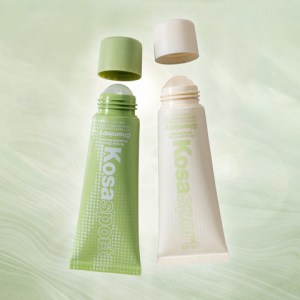 Over the past few months, Kosas, Nécessaire, Surface Deep, Maapilim and Drunk Elephant have launched deodorants with acids, especially AHA’s, in their ingredient profiles. They are going after health-conscious consumers in the natural deodorant market, which reached $4,956.8 million in 2019, according to Euromonitor. 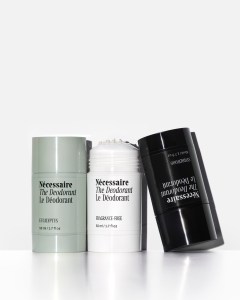 Nécessaire launched The Deodorant, its third most popular product, in February.  courtesy

Natural deodorants have been on the rise as consumers switched gears toward “no aluminum” products, Euromonitor’s research shows. And though the deodorant market is projected to slow due to dwindling concerns over body odor and perspiration during coronavirus-related stay-at-home orders, more consumers than ever are finding natural deodorant replacements acceptable. According to Mintel, in 2020, 24 percent of consumers believed natural products worked just as well as non-natural ones, up from 17 percent in 2017. Founders from the latest clean, acid-oriented offerings on the market said they anticipate their specific launches doing well, though many declined to share specific projections, citing uncertainty from COVID-19.

At Nécessaire, The Deodorant, which launched in February, is projected to contribute 15 to 20 percent of total sales and estimated to be the brand’s third most popular product. The Deodorant, $20, is formulated with lactic and mandelic acid, as well as minerals including silica, kaolin and zinc. The formula has a pH between 3.5 and 4.5 meant to maintain the acidic level under the arm. 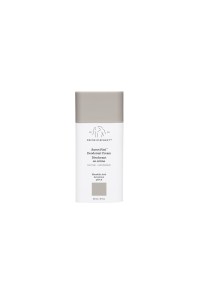 Unlike traditional deodorants that often use aluminum to block skin from perspiring, the latest round of deodorants is meant to allow sweating while aiming to eliminate body odor more thoroughly than some traditional natural deodorants. Aluminum has been criticized as a deodorant ingredient, and some scientific studies have said it may be linked to cancer and Alzheimer’s.

By relying on AHA’s and BHA’s, the natural exfoliators frequently favored by the skin-care industry, new deodorant formulations are meant to act as antibacterial agents, unclog pores and hair follicles, and maintain the skin’s pH balance. By doing that, the AHA’s are able to prevent bacteria from growing and causing odor, according to cosmetic chemist and founder of BeautyStat Ron Robinson.

“The reason that we put them (AHA’s) in the deodorant was to shift pH for bacterial growth…. Not only do they stop [body odor], but they really help care for that skin as well,” said Sheena Yaitanes, founder of Kosas. Kosas’ Chemistry Deodorant, $15, launched in June and is clearly marketed as an “AHA Serum Deodorant,” including shikimic, mandelic and lactic acid.

“If I didn’t need deodorizing, I just had to skip deodorant altogether because the way that clean deodorants are typically formulated would either make my b.o. worse or irritate my armpit,” said Yaitanes.

Like Yaitanes, Tiffany Masterson, founder of Drunk Elephant, said she struggled to find natural deodorant that was effective and didn’t irritate her skin. Some ingredients in natural deodorants, like baking soda, often cause products to have a rougher texture and can lead to bumps and redness. Eventually, Masterson developed Drunk Elephant’s $16, mandelic acid-based Sweet Pitti Cream Deodorant, which launched in March.

“We chose to only use ingredients that support the actual acid mantle on your skin”, said Masterson. “It’s the same approach we take to face products, but it’s just all about supporting the healthy function of skin and the acid mantle.” 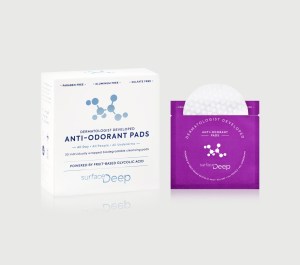 Surface Deep, founded by Alicia Zalka, launched their Anti-Odorant pads in January, which contain glycolic acid and are priced at $26 for a pack of 30. An early adopter of the acid-deodorant option, By Humankind, founded by Brian Bushell, launched a $12 deodorant in February 2019 that contains lauric acid, which is known to have a gentle cleansing property and is often used in acne products. Maapilim, founded by Jonathan Keren, launched a $26 lactic acid-based roll on deodorant in April 2019. 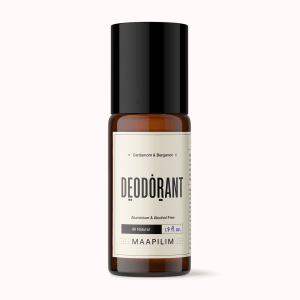 The evolution of clean deodorant formulations has also led to a proliferation of non-stick product formats.

Kosas’ Chemistry Deodorant is a roll-on serum. Surface Deep’s Anti-Odorant comes in a pad, similar to a cotton round. Drunk Elephant’s Sweet Pitti Cream and Nécessaire’s Deodorant both come in a lotion-like consistency.

“The ingredients used lend themselves to a more fluid, liquid type of delivery,” said Robinson, noting that liquid or cream consistencies can be gentler on skin.

Acids have been a favorite of the skin-care set for a while now, and experts anticipate they will roll further into body care, too. Surface Deep, for example, followed the Anti-Odorant launch with glycolic Skin Wash, safe for face and body.

“You see it (AHA’s) in all of these other products,” said cofounder of Nécessaire Randi Christiansen. “And I think you’re going to really see that come up. You’re going to see us really dive into that in different personal-care categories.”

E-commerce: ‘The New Name of the Game’ at L’Oréal