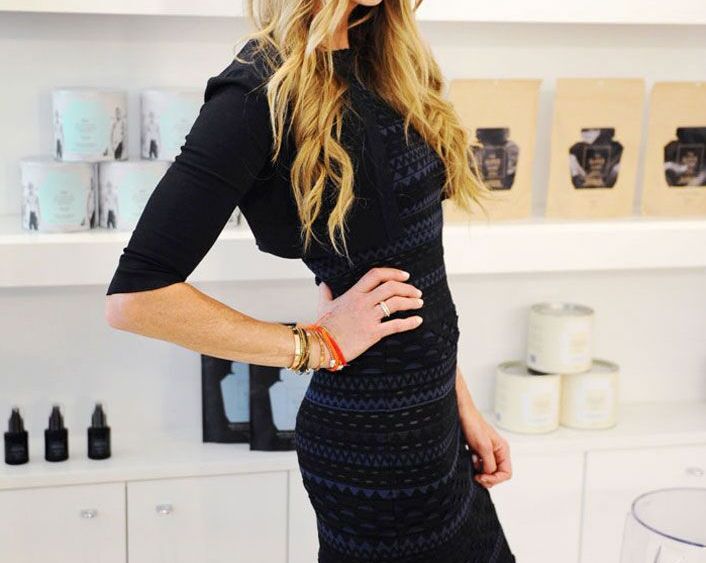 Move over Martha. Elle Macpherson is taking her blender on the road for her WelleCo’s natural powder supplements. The model and entrepreneur whipped up a batch of fresh almond milk in Miami on Jan. 10. Dressed in an Alaïa tube dress and sky-high sandals, this wasn’t your garden variety Food Network cooking demo.

“I think it needs more banana,” she said, to a group gathered at Gee Beauty to sample a smoothie with her chocolate Nourishing Protein. “I love the mix of wellness and luxury. It isn’t about girls wearing Birkenstocks and boiling brown rice.”

Since launching her initial product, the Super Elixir Alkalising Greens, in 2014, the brand has grown to representation in more than 60 countries. The online store’s business is booming, too, according to Macpherson, who also counts Harrods and Selfridges among accounts and Kate Moss and Karolína Kurková as fans.

“I just sent some to Karl [Lagerfeld],” she said, of inviting anyone to participate in the first #SuperElixirChallenge, a 30-day, global initiative to swap synthetic multivitamins with her signature product in 2017. “We are encouraging them to let us know how they honestly feel.”

“It was inspired by the needs of my 13-year-old son, Cy, who was choosing carb- and sugar-laden snacks after school between canteen school lunch and dinner,” said Macpherson, of the constant battle to stop by Starbucks on the afternoon carpool home, which many parents can relate to. “He’s at the tricky age where he exercises free choice — usually sugary drinks like Starbucks — yet also at the age where the body especially needs clean nutrition to go through physical, emotional and hormonal changes.”

Her next demo will be at WelleCo’s headquarters in Cottesloe, Western Australia, in February. Additional products are slated for mid-2017.