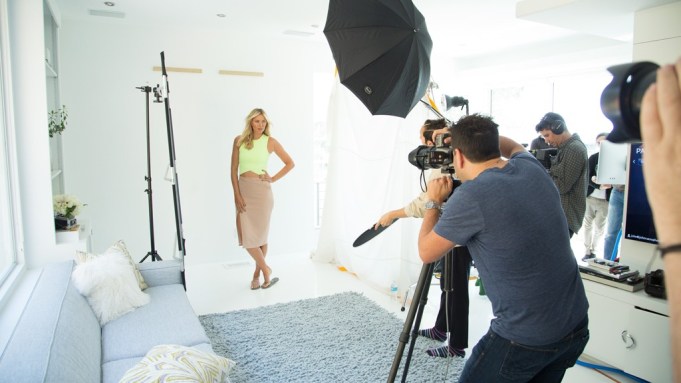 The amount of the investment was not revealed, but a spokeswoman for the six-year-old sun care company described it as “significant.” On social media networks starting within the next few weeks and in a broader fall campaign, Sharapova will help spread Supergoop’s message about the critical role of sunscreen in combating skin cancer.

“Tennis has brought me so many incredible partnerships, and I have had the experience of working in design with Nike and working with Tiffany and meeting with Frank Gehry. As I get a little older, I see partnerships in a bit of a different way. I look for partnerships where I see the potential for growth in the years to come,” said Sharapova in Los Angeles, where she was on a shoot for Supergoop. “I’ve been very lucky to make money to live [comfortably] both today and the rest of my life, but to be associated with something that I believe has huge potential in the future and enables you to have a big say, it is really easy for me to work with something like that.”

Supergoop chief executive officer and founder Holly Thaggard underscored that Sharapova’s long-standing dedication to wearing sunscreen makes the 26-year-old athlete an ideal proponent of the brand’s products. “This is the first real opportunity that we have seen that has been such an excellent fit,” she said. “Maria is young. She has an active, healthy lifestyle, and she reaches a broad demographic.”

Sharapova said she sports sunscreen — Supergoop’s Everyday Face & Body Moisturizer, to be specific — when she’s training or in tournaments, but she also doesn’t scrimp on sunscreen when she’s not. “One of the most important keys to this relationship and partnership is the [idea] that you don’t only need sunscreen when you are outdoors and it is 100 degrees outside, but on the days where you are just going to an office and you might only spend 10 minutes outdoors. You still should be wearing sun protection,” she said. “One of the biggest products for us is the City Serum. That’s a product that is not waterproof and that is something that I use when I’m not playing. That’s something that’s become a base for my makeup.”

Taking sunscreen beyond the ways and times it has traditionally been used is a concept that Thaggard believes is catching on. “In the fourth quarter of 2013, I think [our sales] were four times [as big] as the same quarter in 2012. We have seen a lift in those months that are not typically in the high season for sunscreen,” she said. Of Supergoop’s growth overall, Thaggard elaborated, “We’ve had triple-digit average yearly growth for the last six years. We are on track to do the same this year.” Supergoop has around 20 stockkeeping units and is available at Sephora, Nordstrom, QVC and Giggle.

When Sharapova is not busy building brands — in addition to her venture with Supergoop, she is trying to achieve her ambition of turning premium candy line Sugarpova into a lifestyle brand — she’s been preparing for upcoming tennis tournaments.

“I was injured the last part of last year. I missed five or six months. It’s always tough as an athlete to go through rehab and get back into the groove of things. It’s been a slow couple of months, but we have the French Open and Wimbledon coming up, so there’s a lot to look forward to,” she said. “After a tough injury, it’s always nice to be healthy, and it gives you a nice perspective when you are back on the court.”