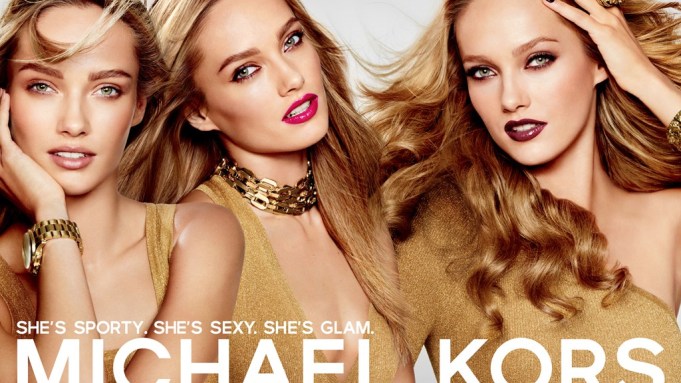 While fashion designers creating color cosmetics lines historically have left a field strewn with casualties, Michael Kors has never been afraid to challenge the status quo — something he will do once again with the color cosmetics line he will launch in August.

“When I first opened my lifestyle stores, everyone thought I was nuts — they couldn’t imagine flip-flops and a crocodile handbag in the same store,” said Kors, who laughed all the way to the bank with an eye-popping initial public offering in December 2011. “I said, ‘The wealthiest women in the world wear flip-flops, and a working girl might save up and buy the most outrageous bag she’s ever owned.’ We’re taking the same attitude here, with beauty in general.”

And the designer mined his family tree for inspiration.

“My grandmother was over-the-top glam — she worshipped at the altar of Elizabeth Taylor,” he reminisced. “She loved jewelry, she loved color, she loved pattern, and she was definitely a woman who liked to enter a room with lots of bravado. And I then had the absolute opposite in my mother, who wore very natural makeup, very little print, was very laid-back and relaxed and sporty. And then I think about my coming of age when I went to FIT. It was the moment of ‘What defines what sexy is?’ I thought about someone that was really full of confidence — if her skirt unwrapped when she sat? Not a problem. So, I think those three things — sexy, sporty and glam — have always been the DNA of Michael Kors, and in a strange way, the Michael Kors woman really is all three of those things — it’s just that she feels more strongly about one of them at certain given times. So I asked myself, how can we express that both with color and with fragrance?”

Working with his beauty and fragrance licensee, the Aramis and Designer Fragrances division of the Estée Lauder Cos. Inc, Kors channeled those thoughts into three distinct collections — Sporty, Sexy and Glam. Each emotion has a fragrance, along with key color products — two $24 Lip Lacquer shades, two $24 Lip Luster gloss products and two $18 nail polishes apiece. Colors range from Diva Lip Lacquer and Hint Nail Lacquer, both nude-taupes in the Sporty range, to Sexy’s blue-red Bombshell Lip Lacquer and scarlet Sensation Nail Lacquer, to Glam’s edgy plum Icon Lip Luster and dark violet Envy Nail Lacquer. Three $50 Bronze Powders — Glow, intended to add light to skin; Flush, a shimmery tan, and Beam, a deep coppery glow — will also be offered, along with a $45 Bronze Powder Brush. Sun and body products include Indulgent Body Creme, $60 for 5.9 oz.; Liquid Shimmer Dry Oil, $60 for 3.2 oz., and Shimmer Bath Beads, $45 for 3.2 oz. The collection is rounded out by three sun basics: Liquid Self Tanner, $32 for 5 oz.; After Sun Gelee, $32 for 5 oz., and After Sun Lip Balm, $28 for 0.12 oz.. The balm is a nod to the Eighties zinc oxide sunscreen look, imparting a hint of white on the lips.

On the fragrance side, Kors’ affinity for white florals such as tuberose is well known — but two of the three scents explore new olfactory territory for the designer, said Trudi Loren, vice president of corporate fragrance development worldwide for the Estée Lauder Cos.

“These are all my favorite scent memories,” said the designer, who noted that his glamorous grandmother wore Joy, while his sportier mother wore Aliage — “and I doused myself in Halston Z-14,” he said.

Sporty Citrus opens with orange and mandarin notes. Its heart is of orange flower, with a drydown of moss notes. Sexy Amber has amber in all three accords, wrapped in white floral and creamy sandalwood notes. Glam Jasmine, the white floral offering, has several forms of jasmine — including jasmine sambac and jasmine petal — with cassis on top and a background of sandalwood. Loren worked with Kors and Firmenich’s Harry Fremont on the Amber and Glam scents, and with Firmenich’s Honorine Blanc on the Sporty scent. The scents retail for $50 each for 1 oz.; $75 apiece for 1.7 oz., and $95 for 3.4 oz.

“It’s wardrobing in the beauty world the way I do in clothing and accessories,” Kors said.

He doesn’t feel the need to launch additional stockkeeping units on a strict schedule. “Everything we’ve done in the beauty world has been because I’ve genuinely feel something’s missing. That’s how Leg Shine [a shimmery, lightly tinted product designed to even out imperfections] came about. As we see this evolve, if I see something that’s going to be an added component, that helps tell the story and helps simplify the whole beauty process for the customer, absolutely. But there won’t be a set formula. It’s an emotion, not a commodity.”

And it’s also why he felt no pressure to launch basics such as foundation and mascara, instead focusing on the products he imagines his customers wearing. “At the end of the day, I try to take a woman and make it easy for her in general,” he said. “I always think the trick is, how do you look like you haven’t spent a bunch of time when in fact it probably did take a lot of time. I wanted to do the essentials — the things you absolutely have to have to represent that mood. Not because someone told you ‘Oh, you have to have it.’ I’ve found that the best things evolve organically,” said Kors, explaining customer demand at his freestanding stores preceded an entry into jewelry, for instance.

He’s also a huge fan of social media. “To me, that’s just a huge global trunk show — we’re communicating back and forth,” said Kors, who at press time had 1,166,090 followers on Twitter and 5,035,581 likes on his Facebook page, and just did an exclusive sneaker only available through his Facebook page. “It’s like a trunk show in someone’s home — it’s the ultimate Tupperware party,” Kors said with a laugh. Kors is passionate about his consumer base. “She has different moods, but she also merges her moods. In my brain, I’m maybe a little like [Pedro] Almodóvar or [Federico] Fellini, where I have all these female characters floating in my head.”

While admitting that launching a fashion designer color line can be challenging, Veronique Gabai-Pinsky, global brand president of the Aramis & Designer Fragrances division of the Estée Lauder Cos., had no hesitations about this one. “Michael’s on fire, and it’s the right time to accelerate globally and the right time to maximize his involvement in the beauty world.” She noted that the line was designed to offer a broader product array than the usual color cosmetics collection in an effort to bolster Kors’ beauty credentials.

In the U.S., Macy’s has a one-year exclusive on the project, which will also be sold in Canada in about 300 The Bay stores and globally in Michael Kors retail stores. In the U.S., the collection will be sold in 660 Macy’s doors, although not all doors will get all products. Twelve will be flagships, with all products and a larger-than-normal footprint with custom-designed fixtures, said Carol Russo, senior vice president and general manager, North America, for Aramis and Designer Fragrances and BeautyBank. Another 207 will have the full collection except for the sun products, and 440 will carry the body and fragrance sku’s only.

Globally, 25 to 30 stores will also be chosen as flagships, also with custom-designed features, noted Stephane de la Faverie, global senior vice president and general manager for the Aramis and Designer Fragrances division of the Estée Lauder Cos.

Mario Testino shot the print and TV advertising, which both feature Kors muse Karmen Pedaru. Print is scheduled to break in September fashion, beauty and lifestyle magazines, while TV advertising — which features Pedaru dancing to Duran Duran’s “Girls on Film,” with Kors making a brief appearance — both in the U.S. and abroad will break at launch time. Robust digital and sampling campaigns are also planned, including an interactive, shoppable video. It’s been designed as a choose-your-own-adventure video, so consumers can experience the whole collection, said de la Faverie.

While Kors and all of the executives declined comment on projected sales, industry sources estimated that the Kors beauty collection could reap first-year retail sales of $80 million or more globally.

Kors noted that while his calendar didn’t allow him to film multiple back-to-back episodes of “Project Runway” this season — “I’d have to have five of myself,” he said — he will appear in the show’s season finale.

As the interview concluded, Kors offered his personal recipe for success. “I am the least athletic human being on the planet. I’m pigeon-toed. I’m a terrible dancer, and I’m not graceful. But you have to have an athlete’s endurance to do it all in fashion, because it spins quick — quicker and quicker. You have to stay curious, and you have to learn that if you work hard, fine, you also have to be in a situation where your eye and your mind can wander. If I can take a day or two off and see something that will recharge my batteries — even if I escape and go to the theater for three hours — it rejuvenates me.”