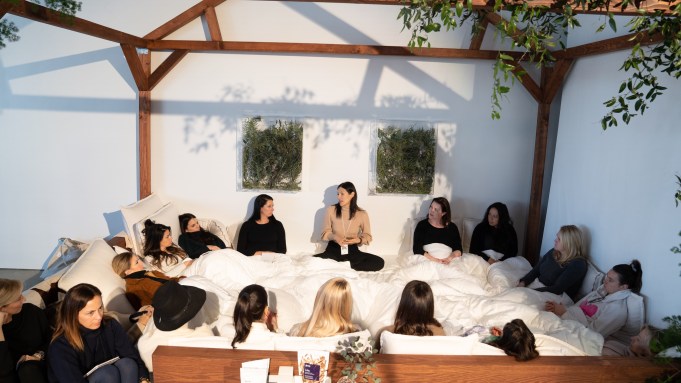 Goop’s In Goop Health Summit descended on New York for the second time on Saturday, taking over an entire floor of Pier 17 in the Seaport District. The ath-leisure-clad crowd was expectedly homogenous — almost exclusively white women — but a vast range of ages was represented among the 600 attendees, most of whom had paid $1,000 for an all-access ticket to the 10-hour day of panels, workshops, psychic medium readings and ample downtime in Goop Hall to shop a Goop-curated retail area with books, beauty products and vibrators, take a power nap in a communal bed, get an ear-piercing, or nibble on tiny plates of kale salad and sip on “brain coffee.”

A small segment of attendees had ponied up $4,500 for a Wellness Weekender ticket, which included a two-night stay at the Park Hyatt in Manhattan, a Friday night cocktail party preceding the event, a “VIP workout session” and other perks.

It was In Goop Health’s second year bringing its summit to New York, following its 2017 debut in Los Angeles. Since then, summits have taken place in both cities, as well as a smaller iteration in Vancouver that was held in October. This weekend’s summit was Goop’s fifth event. The lifestyle content-meets-commerce company is showing no signs of slowing its live events business — another L.A. summit is to take place in May, and in June, In Goop Health will make its debut in London.

At this weekend’s gathering in New York, an upbeat sorority of Goop staffers wearing white sweatshirts emblazoned with the word “Goopies” in black were on hand throughout the day to help answer questions and usher attendees to and fro. In the morning, after picking up white Keds sneakers adorned with Ariel Gordon charms engraved with “Goop Times,” everyone gathered in the Chat Room, which would later be the site of various panel discussions hosted by Elise Loehnen, Goop’s head of content, on niche topics such as “micro-resilience,” intimacy and masculinity, and psychedelic medicine.

Gabrielle Bernstein — the motivational speaker and life coach, author of popular books such as “The Judgement Detox” and “The Universe Has Your Back,” Lululemon yoga ambassador, etc. — started the day off with an intense Kundalini meditation known as “The Breath of Fire,” which had the seated audience breathing in and out rapidly while raising their hands in the air.

The frenetic energy in the room set the tone for the day, as women clad in Lululemon leggings, Gucci fanny packs and Saint Laurent sneakers (while attendees were encouraged to slip into their new Keds upon arrival, that suggestion seemed to go mostly unheeded) zipped around for the next several hours, happy to be there and eager to take in the day’s offerings.

The range of ages represented — while mostly concentrated to women in their 30s and 40s — was exemplified by the appearances of both Gwyneth Paltrow’s 76-year-old mother, Blythe Danner, and 14-year-old daughter Apple Martin. WWD observed Danner shopping the beauty assortment with the assistance of Goop beauty editor Jean Godfrey-June, while Martin stopped by early in the day for an ear-piercing. The free piercings were by far the most in-demand activity in Goop Hall, eliciting long lines. Other popular activations included adult slumber party-esque “wind-down sessions” in Buffy x Goop’s “cocreated sleep sanctuary,” a communal bed covered in Buffy’s sustainable comforters, which are made primarily from eucalyptus wood pulp.

Also in Goop Hall, there was ear seeding — an acupressure therapy said to ease feelings of stress and anxiety, an infrared sauna, B-12 injections that had women pulling their pants down without a second thought and “no makeup” makeup applications by Glamsquad using only products sold on Goop. There was a steady stream of small snacks at the ready, including Bonberi’s coco parfaits and grain bowls, multiple kale salads, Honeybrains’ “power oatmeal” and cauliflower steaks, and a seemingly endless supply of gluten-free blueberry muffins by Hu Kitchen.

The retail area was well shopped by the end of the day, as women snapped up new chewable Goop supplements — Knock Me Out for sleeplessness, Nerd Alert for Energy — sleekly designed vibrators by Dame Products, books such as Shira Lenchewski’s “The Food Therapist” and Dr. Will Cole’s “Ketotarian” diet tome, and activewear by G. Label. Popular beauty buys were Vintner’s Daughter’s $185 Active Botanical Serum, and Douglas Little’s natural fragrances, both his own line called Heretic and the Goop candles, for which he serves as the perfumer.

If anything, Goop seems a barometer for what’s next going to be popular in the world of wellness. At the In Goop Health Summit in Vancouver last fall, hot topics included gut health and the future of cannabis — subject matters that have, by now, gained mainstream traction, with probiotics infused in skin and hair care and CBD oil being sold at corner pharmacies.

Pills in general seem to be out of vogue. “I’m not a fan of pills — we have a big pill culture,” said Elle MacPherson, model and founder of the plant-based supplement brand WelleCo, on why she chose to produce powders over pills, during a panel discussion on clean beauty with makeup artist and Westman Atelier founder Gucci Westman and Beautycounter chief executive officer Gregg Renfrew.

This weekend’s event delved deeper into the realms of emotional health and alternative medicines. Dr. Ellen Vora, a psychiatrist who specializes in healing depression and anxiety without prescription medicine, led workshops on self-acceptance. On the other end of the spectrum, Drs. Will Siu and Alex Belser in a panel on psychedelic medicine (which Paltrow pinpointed as the Next Big Thing in an interview in Sunday’s New York Times) described prescribing microdoses of ketamine to patients with mental illness.

“Things are shifting very quickly,” said Siu, about the growing awareness of microdosing psychedelics for mental illness, which he also noted can incite “profound spiritual experiences,” alongside curing depression.

Even the food component of the day’s programming was tinged with a theme of emotional health. In a workshop on “Food and Mood,” psychiatrist Uma Naidoo expounded that one should not just be eating physical health, but mental health, too, and predicted that pairing one’s diet with one’s emotional needs is at the forefront of a future, more individualized diet culture, when people will be eating not just for weight loss, but for weight loss and anxiety, or weight loss and depression, for instance.

The topic of intuition kept coming up throughout the day, particularly as it pertains to medical situations. Caroline Myss, a “medical intuitive,” served as the first fireside chat of the day, interviewed by Paltrow herself. Myss talked about connecting with the chakras to understand the body’s ailments.

“Do I need to explain what chakras are?” asked Myss. “No, they’re Goopies — they get it,” said Paltrow.

Myss recommended tapping into one’s intuition the next time one feels a sickness coming on — for instance, Paltrow’s friend’s recurring bladder infections, which she gave Myss as an example. “Instead of asking, ‘What’s wrong with my bladder?’ the first thing you should ask is, ‘What’s out of balance?'” said Myss. “Reacting to your anguish about something without doing anything about it can get into your bladder.”

Spirituality was a key theme that ran through the course of the day. “How many of you believe that there’s something else out there guiding us, a governing force in the cosmos?” asked Vora during one of her self-acceptance workshops. Everyone raised their hand.

Various psychic medium readings held in “The Spirit Room” throughout the day were a hot-ticket item — in one group reading, WWD observed psychic medium Kim Russo, author of “The Happy Medium: Life Lessons from the Other Side,” channel one woman’s deceased Yorkshire Terrier.

One thing noticeably absent from the Goop summit was the plethora of Instagrammable activations one might encounter at beauty festivals such as Beautycon or Gen Beauty. Though the space, which was designed with Goop’s minimalist chic aesthetic in mind, was inherently Instagrammable and minus a few exceptions — Buffy’s sleep sanctuary, an In Goop Health-branded Astroturf field filled with fake flowers — the overt Insta-bait was noticeably absent from the summit.

Perhaps this is because digital detoxing was a topic on everyone’s minds. “I was at a birthday party [with a no-phone policy] and it was great because no one was there trying to have the experience and post the pictures,” said Demi Moore, in the day’s closing conversation between her, Paltrow and Arianna Huffington.

“The growing addiction [to technology] is something we all need to address,” said Huffington, founder and ceo of Thrive Global, whose latest book addresses reducing technology dependence. “We need to set boundaries and make it clear that we need to put down our phones and connect with ourselves.”