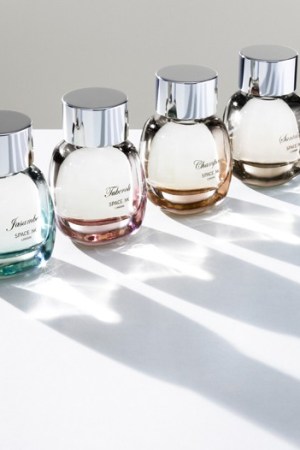 Space NK is looking to crank up its fragrance business with the introduction this fall of five namesake scents.

This story first appeared in the August 22, 2008 issue of WWD. Subscribe Today.

The initiative will include the relaunch of the U.K.-based retailer’s existing Laughter scent as well as the launch of four new women’s fragrances, called Champaca, Jasamber, Tuberoli and Santalrosa, which were inspired by the travels of the firm’s founder, Nicky Kinnaird.

Laughter, a unisex scent originally introduced in 1999, is being relaunched in October to mark the 15th anniversary of the beauty chain, which opened its first store in London’s Covent Garden in 1993. The four new scents will also bow in October.

“Laughter has been synonymous with Space NK as a brand,” Kinnaird said of the scent, which was inspired by the Belfast, Ireland-born retailer’s time spent in Spain when she was growing up. “It’s our iconic, signature fragrance.”

While Space NK has had previous private label fragrances, the five scents for fall — and accompanying ancillary collections — are part of a new, “clean” focus by the chain, according to Kinnaird. And by this she means free of parabens, sulfates, petrolatum, glycols, mineral oil, silicones, synthetic colors and other chemical compounds.

“We have had other private label scents,” said Kinnaird, “but now the focus is on clean products — particularly with the clean formulations. That’s where we want to go as a company.”

For Kinnaird, private label is a way to “fill in the gaps” within the Space NK product assortment, which comprises between 60 and 65 brands. While she wouldn’t discuss sales figures, about 15 percent of the chain’s total business, which could exceed $90 million by yearend, according to industry sources, is generated by private label. Existing Space NK scents, such as Compelling, Soulful, Enrapture and Seduction will be phased out to make room for the fall arrivals.

Fragrances only account for about 10 percent of Space NK’s total sales, but skin care generates the largest share, 40 percent, and color cosmetics makes up about 30 percent of the business. Hair care and other categories make up the balance of revenues.

The new iteration of the Laughter scent, which will be available in eau de toilette and eau de parfum versions priced at $80 and $95, respectively, has been repackaged in 50-ml. bottles designed by Fabien Baron. The fragrance, which was originally blended by perfumer Christopher Sheldrake, mixes top notes of bergamot, grapefruit and lime with juniper berry, angelica root, verbena, rosemary, fennel and coriander and a base of patchouli, amber, musk and ginger.

Seven ancillary products will accompany the Laughter scents, including body cream and lotion, hand wash and lotion, shower gel, bath oil and a candle. They will be priced between $32 for the 300-ml. hand items and $65 for the 200-ml. body cream and candle.

Baron also designed the packaging for the Champaca, Jasamber, Tuberoli and Santalrosa eaux de toilette, each of which comes in a 50-ml. bottle priced at $70.

Champaca, which is named for the Asian flower, was inspired by Kinnaird’s travels to Rajasthan, India, and features a spicy, floral, woody structure that was composed by perfumer Azzi Glasser. Jasamber, a combination of the words jasmine and amber, was inspired by Lapland, in Finland, and has a citrus-woody makeup constructed by Robertet.

Tuberoli (tuberose and neroli), takes its inspiration from Rome and its white flower accords and notes of blackcurrant and peach were blended by Sheldrake. He also mixed Santalrosa (santal, or sandalwood, and rose), which was inspired by Hakone, Japan, in the foothills of Mount Fuji. Its floral top notes and woody heart are blended with a base of heliotrope, vanilla and musk.

Each of the four new scents will be accompanied by a shower gel, body lotion, bath oil, a bath tablet set and votive candles. The ancillary lines are priced between $28 for eight bath tablets and $70 for four votive candles.

For holiday, an assortment of 17 gift and sampler sets ($32 to $225) featuring miniature versions of all five scents, along with the ancillaries, will be introduced in late October.

Initial plans call for the fragrances to be carried only at Space NK, which currently has 58 locations in the U.K. The chain also has four stores in the U.S.; will open leased-space, in-store shops at nine Bloomingdale’s locations beginning in November, as reported, and anticipates opening five more stores in the U.K. this fall.