A New Counter at Macy’s for Fashion Fair

Come Wednesday, the Fashion Fair counter at Macy’s Herald Square is getting an updated look and new amenities. 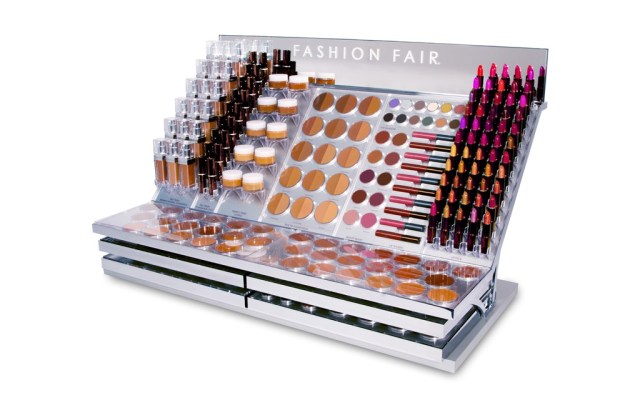 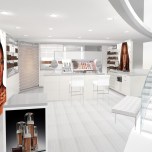 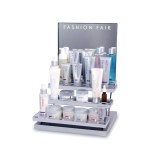 Come Wednesday, the Fashion Fair counter at Macy’s Herald Square, a fixture for nearly three decades, is getting a new lease on life with an updated look and new amenities including the floor’s only custom-blending foundation bar.

“Mrs. Johnson [Fashion Fair founder, Eunice] started the brand when she saw models mixing pigments to match skin tone,” said Desirée Rogers, chief executive officer of Johnson Publishing, which owns Fashion Fair cosmetics. “Foundation is where we started. That’s our history so it’s very important that we continue to evolve to supply those women with a foundation. Ultimately the goal was to create a line for women of color with heavily pigmented [offerings] and foundations that went from light beige to the darkest tones of ebony.”

The new 350-square-foot “store within a store,” which officially opens on Wednesday, will feature a 72-inch LED high-definition video wall showcasing various elements of the brand, including historical images, fashion shoots, products and short films.

Additionally, a design element made entirely of foundation bottles will be on display in the brand’s new in-store outpost. “We are creating a whole environment for the brand. From video to product, to displays, to the music, you will be enveloped in the new Fashion Fair brand,” said Rogers, adding that the most recent Fashion Fair space in Herald Square — where brand has been for more than 25 years — included only 12 feet of counter space.

Customers visiting the new custom blending bar, a first for Fashion Fair, will be offered a personal skin analysis to determine their coverage and coloring needs. After being shade matched, shoppers’ individual formulas, $34 for 1 oz. of foundation, will be kept on file for future purchasing. “With darker complexions and multiethnic skin, there are so many different ranges of undertones, so it’s much more complicated to find a foundation match,” said Rogers, adding that an increasing number of Middle Eastern, Latino, Asian, Indian, Caribbean, multiethnic and Caucasian women are shopping the brand. “We don’t want anyone to be turned away because we cannot match her complexion.”

According to Muriel Gonzalez, executive vice president of cosmetics, fragrances and shoes for Macy’s Inc., the brand’s new look is meant to gel with the store’s redesign now under construction.

“Fashion Fair has been a terrific partner of Macy’s throughout our 40-year relationship that began the day the brand launched,” said Gonzalez. “We have witnessed the exciting evolution of the Fashion Fair brand and are incredibly proud to launch their new shop first as part of the on-going renovation of Macy’s Herald Square. Our customers will be energized by the new look of the brand and will be able to experience collections exclusive to Macy’s.”

Although executives would not divulge numbers, industry sources estimate that $1.5 million worth of business will be generated at the new counter in its first year at retail.

As part of the update, Rogers noted that the brand has also partnered with fashion designer Baruch Shemtov on a signature pink and gray tie for the brand ambassadors, which nods to a carpet design in Johnson’s Chicago office circa the late Seventies.

“We have a great base of customers and want to expand that base,” said Rogers. “We are incorporating all of the assets that we have and using them to bring Fashion Fair to life again.”

For its shop concept, Fashion Fair partnered with RPG, a global designed and manufacturing firm, which developed the space. Through the use of chrome, white lacquer and glass, RPG created a “clean and modern statement” for the relaunch of the brand, according to Bruce E. Teitelbaum, ceo of RPG. “The overall design of the displays and shop supports a cohesive and modern positioning of the brand that inspires all women to achieve their individual beauty,” he said.

According to Rogers, the redesign is a way to unify the brand assortment and offer customers a calm oasis to shop. “It was very basic before, we didn’t have an overall feel or unified design,” said Rogers. “Now it’s much lighter so the cosmetics are showcased much better than on tan and brown colors [the former color scheme].”

The new store-within-a-store comes after the brand has, over the past two years, been evolving its look on counter. To that end, makeup was taken from primarily pink packaging into “metallic chocolate” or “lucite and silver” packaging, while skin care, once gray, was given a white and silver look. The product lineup was also reevaluated, with some items phased out, 48 were reformulated and 66 were added. There are currently 295 stockkepping units in the full Fashion Fair assortment.

Some of the brand’s newest launches include A Perfect Finish Illuminating Powder, $29, available in four shades, rolling out now, and True Fix, $29, a dual-shaded medium-coverage foundation, available in 30 shades, which will bow in July. Multiple limited-edition color palettes are also planned for holiday.

According to Rogers, throughout the summer, most of the brand’s 561 global counters will also be refreshed. The next recalibrated space will be launched at Morley’s department store in the Brixton section of London. “Our goal is to establish ourselves with the generation that we missed,” she said. “We are seeing women come forward with their daughters and granddaughters, women that want to look good everyday. Our target is women 30 and up but the brand is cross-generational. I think we can get a lot of the twentysomethings [involved].”