The limited-edition Hypnôse Show line, which includes mascaras, eye palettes and false eyelashes, is due to hit counters worldwide on June 15. 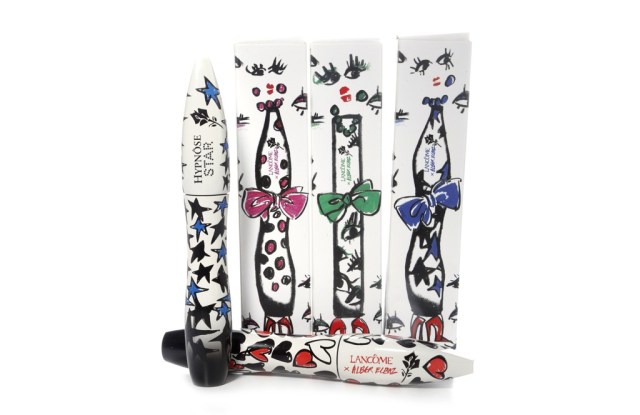 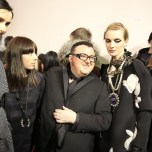 This story first appeared in the April 26, 2013 issue of WWD. Subscribe Today.

Lancôme has teamed with the fashion designer to conceive the limited-edition collection, called Hypnôse Show, which includes mascaras, eye palettes and false eyelashes. It is due to hit counters worldwide on June 15.

“Eyes are the center of Lancôme,” Youcef Nabi, president of Lancôme International, told WWD. (In the U.S. last year, for instance, the L’Oréal-owned brand ranked first among prestige mascaras and its Hypnôse line was the category’s top franchise, according to The NPD Group.)

Elbaz’s affection for Lancôme is longstanding.

“After school, I moved to New York, and every time I would go back home I would stop at Lancôme and buy my mom a gift,” he explained. “I have this kind of nostalgia and these kinds of memories about the brand.”

Elbaz and Nabi met four years ago and recently decided to do the joint project centering on peepers. At first, Elbaz questioned what he could bring to the world of cosmetics, but then he had a flashback to a holiday.

“Once I was in a fancy place where there was this group of people that were all shining. The shoes were shining, the hair was shining, the skin, watches and diamonds — but the eyes were not shining,” he explained, sitting in a suite of Paris’ Le Bristol hotel. “I thought if I were to do a project I would love to do a ‘happy eye’ project to make the eyes shine.”

Elbaz said the idea was to rework “in a different way, with a different perspective” Lancôme’s best-selling mascaras. So the designer began by conceiving the approximately 90-second video advertising campaign featuring his hand-drawn characters, which goes online June 3.

Elbaz said its story line was meant to feel like a fairy tale — “to go back to a fantasy, to go back to a dream, to a happy ending. I think we always remember stories more than objects.

“The whole story was about going back to authentic and going back…into a project that is less global and a little bit more personal and emotional,” he continued. “It was less generic. It was less glossy.”

“Here it was taking some of their best DNA and [asking] what is it that you can do with it,” he said, adding they opted to maintain the Lancôme logo and iconic rose.

For Elbaz, it was evident what he would do for each product.

Elbaz and Lancôme executives together picked the colors of the makeup products.

“We wanted to choose colors that we know sell,” said Nabi, adding there are some hues new to the market as well. The Star mascara’s formulation, for example, is chockablock with black-blue pigments billed to make the whites of people’s eyes seem whiter.

According to Elbaz, best known as the designer of Lanvin, the process of creating the makeup collection didn’t differ much from that of crafting a fashion line.

“I think that making a cake or a perfume or a dress or jewelry — in a way it’s the same process,” he said. “You might speak French or English or German or Chinese, but in the end we speak with the eyes. It’s an international language.”

The collection will be sold through Lancôme’s traditional distribution channels. In the U.S., the makeup is to be available at the brand’s counters and through lancome.com, while the false lashes will be exclusive to Nordstrom.

Also in the U.S., the limited-edition Hypnôse mascaras — including Doll, Drama, Définicils and Star — are to be priced at $29. Each of the four corresponding eye palettes will be $51, and the false lashes, $35.

Lancôme executives would not discuss projections, but industry sources estimate the Hypnôse Show line will generate in excess of $15 million in retail sales globally. That’s higher than what Lancôme’s prior limited-edition collections usually have made, according to the industry sources.

The brand has long had a fashion focus. In November 2010, Lancôme introduced a holiday makeup collection with L’Wren Scott. More recently, it joined forces with Olympia Le-Tan for a one-shot minaudière containing some of her favorite shades of lipstick and nail polish. And a limited-edition color cosmetics offering with Jason Wu will be on counter in September.