Ashley Graham has a beauty contract.

Graham has inked a deal with Revlon Inc. With it, she becomes the first big-name, plus-size model in her generation to sign a beauty contract. 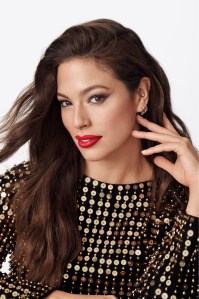 “Historically, curvy girls are not given beauty contacts,” Graham said. “It’s kind of groundbreaking, because in my generation of models, this hasn’t happened yet. This is one of those moments where I’m over the moon, I cried a little.”

“Live Boldly” is a concept that fits into Graham’s life naturally, she said.

“My affirmations are, ‘I am bold, I am brilliant, I am beautiful,’” Graham said. It’s something she started telling herself, with occasional modifications, when she was 18 years old.

“There was a moment in my life…[when] I wanted to go home, I wanted to go back to Nebraska from New York and I wanted to give up and I was just done with modeling because it was such a hard, cruel world,” Graham said. “[My mom] said, ‘Ashley, your body is supposed to change someone’s life,’ and when she said that to me I didn’t get it at first. She also told me, ‘you have to talk better to yourself’ and she helped me understand what affirmations were.”

“You’ve been slowly seeing [curvy] models pop up in makeup campaigns, but you haven’t heard of any actually signing contracts, and I think it’s because [companies] just want to get their feet wet. It’s like, ‘Hmmm, let’s try this bold curvy thing now and see if it’s real or see if it’s a trend,’” Graham said. “The average American woman is a size 14 and if you ask me, lipstick does not have a size.”

That’s something Revlon is taking into consideration as it works on refreshing its image. The “Live Boldly” campaign intentionally features groups of models instead of just one, and features them in non-studio settings.

“When models become successful they tend to only do photographs alone. They don’t share — in magazine days, it’s like, ‘the girls won’t do a double’…as a result, you get the sense that being alone is beautiful,” said Linda Wells, chief creative officer at Revlon.

“So often beauty is photographed and filmed in studios because it is a controlled setting where there’s no wind to mess up the hair and no natural light,” Wells continued. “It has this feeling of distance from life, as if beauty cannot exist in the world but has to be in this hermetically sealed room.”

Instead of going that route, Revlon brought its ambassadors together, in part to send a women-supporting-women message. “There isn’t a male gaze, there isn’t a male presence in any of this — this is a women’s moment,” Wells said.

That support is something Graham is personally familiar with. “When my agency Ford Models dropped me about five years ago, they didn’t just drop me but they dropped a whole division, the whole curvy division,” she said. While most of the models affected went and quickly signed new contracts, Graham and about five others didn’t, she said, and came together to pitch themselves to IMG.

“As a model, you’re told, ‘Do not talk to other models,'” Graham said. “We all went to IMG together and we built a business proposal and were like, ‘This is what the curvy numbers are, this is why you need to invest in plus-size, this is where our careers are headed.’ And you know what? They did it.

“It made us stronger and it made us understand our worth and I think if more women did that — band together — and come up with plans together and talk about their heartaches and their emotions and didn’t judge each other, I think we’d be living in another world,” she said.

“Live Boldly” was launched after Talley and Wells — both relatively new to Revlon — dove into the archives for inspiration, and found things like the 1973 Charlie campaign featuring a woman striding down the street in pants “redefin[ing] sexy as confident,” Talley said.

Revlon’s “Live Boldly” campaign — complete with group shots and more human-sounding language in place of marketing speak — will roll out to retailers over the next 18 months, according to Talley. It will be followed by activations featuring the Revlon ambassadors and philanthropic initiatives.