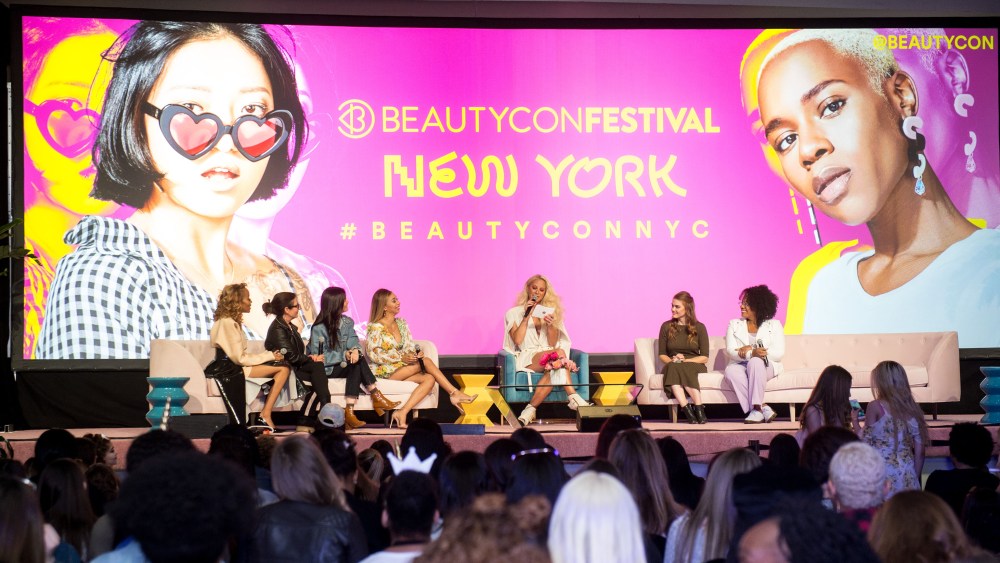 Slides, swings, seesaws, a ring toss, and selfie booth after selfie booth filled with everything from fake money to bubbles, balloons and cascading confetti. Beautycon was one big playground for the 20,000 attendees who streamed to New York’s Jacob K. Javits Convention Center this past weekend — a crowd that ran the gamut from Paris Hilton to Hillary Clinton.

That range is indicative of the ethos that Beautycon founder Moj Mahdara is trying to promulgate with her rapidly growing brand, which encompasses everything from festivals to a trend forecasting service called FOMO.

“We’re focused on making this the best pop-up retail experience out there,” Mahdara said. “Everyone in retail needs to think about themselves as a community hub and cultural center — it’s not just a transaction, like, ‘I’m going to buy a piece of lipstick or shadow or skin care.’”

Mahdara has plans to take the Beautycon festival experience beyond annual events. “You’re going to see pop-up retail in different markets on a regular basis, and you’re going to start to see us play in commerce,” she told WWD in a green room on Saturday, the first day of Beautycon, noting this will start rolling out in 2019. This is the first time Beautycon New York has adopted the two-day format that Beautycon Los Angeles goes by. This year, Mahdara added specialized areas for wellness and K-beauty brands. The move to the Javits Center from the Brooklyn Cruise Terminal was due to a need for increased space to accommodate attendees, talent and brands— attendance at this year’s festival jumped from last year’s 12,000 people.

Beautycon is certainly an experience. On Saturday, groups of screaming tweens swarmed influencers such as the plus-sized fashion vlogger Loey Lane, beauty YouTuber Raye Boyce of @itsmyrayeraye and the fitness influencer best known for her backside, Jen Selter. A bleeped-out soundtrack of Cardi B and Nicki Minaj blasted through the convention center, leading to spontaneous dance parties. Chants of “Paris for president!” could be heard once Paris Hilton took to the main stage for a fireside chat with Condé Nast’s Phillip Picardi.

The merch station was packed with eager attendees snapping up Beautycon-branded swag — sports bras, sweatshirts and socks. Dozens at a time lined up for brand booths — free hair braiding at OGX by brand ambassador and celebrity hairstylist Kahh Spence, makeup lessons at NYX, custom lip gloss creation at Essence Cosmetics, a ring toss game with glow stick necklaces at Anastasia Beverly Hills and at Urban Decay’s Mini-Mart, simply a photo opportunity in front of a purple Urban Decay branded truck and a chance to sign up for an email list in exchange for free samples.

“It’s the programming, the curation — it’s what makes everything awesome in life,” she said when asked what makes the Beautycon experience unique. “Why do you go to Coachella when you can see Beyoncé on tour? It’s the story, the community feeling that people get…when you walk in here, you get people who feel the same way about themselves and this industry in beauty.”

That feeling, said Mahdara, is all about inclusivity. A message of diversity, inclusivity and acceptance is pervasive throughout Beautycon’s messaging.

“People want to be educated, they want to see their friends there and they want to see people who look like themselves represented in products and materials,” Mahdara said. “We’re pushing the industry to be — rather than their ‘spray and pray’ version of inclusive — actually inclusive of women of all body types, age ranges, ethnicities, religions.”

Many of the topics covered in panels and discussions throughout the weekend dealt with self-love and acceptance. Hilton told Picardi, digital editorial director of Teen Vogue and Allure, that her upcoming skin-care line is all about prevention and protection, so girls wouldn’t “feel like they had to get Botox.” Iskra Lawrence, a model and Instagram influencer known for championing body positivity, spoke about not comparing herself to others. Transgender beauty activist Gigi Gorgeous discussed getting D’s in math class and then ultimately becoming a chief executive officer. “When you are yourself, that’s how you’re going to stand out,” said Lifetime “Glam Masters” judge Kandee Johnson.

Much of the brand marketing seen at the festival was geared toward inclusivity and acceptance. MAC Cosmetics’ “All Ages. All Races. All Genders.” slogan was displayed on a selfie mirror within its installation. At SexyHair, there was a selfie wall proclaiming “Love Is,” on which festivalgoers were able to scribble what beauty means to them.

Big beauty brands not only adopted Beautycon’s core messaging of inclusivity, but many went all out in terms of experience.

“They’ve seen the success of brands like Fenty and Glossier and Kylie, and they look at how they are leaning forward into audience and community storytelling. I think they’re inspired by that,” Mahdara said. “They see it as part of that same culture. This is where they’re reaching the next generation of consumers for them.”

Amorepacific set up Amorepacific Land inside Beautycon’s K-Town, with separate installations for each of its key brands in the U.S. At Laneige, attendees whizzed down a slide into a pile of branded pillows. At Sulwhasoo, there was a seesaw anchored by a giant bottle of the brand’s First Care Activating Serum.

Amorepacific’s luxury antiaging skin-care brands — save for Mamonde and Laneige, which are targeted at Millennials — aren’t necessarily the stuff of teen dreams. But for U.S. president and general manager Jessica Hanson, Beautycon is about exposing Amorepacific’s brands to as many people as possible outside of the company’s core demographics.

“We definitely hit our goal of attracting interest and engagement across all age levels,” Hanson said. “The lines were constant, there was never a break for our team. Whether they came for one brand or they had no idea what Amorepacific was, they stayed for a long time.”

For Winky Lux, Beautycon serves as a one giant focus group. The brand sold about 1,500 of its new Pucker Up Lip Plumping Gloss at last weekend’s festival, and set up a lemon-studded selfie wall themed to the product’s lemon cake scent. “Obviously, there are a lot of young customers that we want to introduce the brand to early on, but we also get a critical mass on testing. At an event with [a retailer], you get to know what their customer wants, but there’s no other place where you can get this much instantaneous feedback,” said ceo and cofounder Natalie Mackey.

OGX’s chief marketing officer Dana Paris relies on the festival as a part of her overall marketing strategy, to raise brand awareness and introduce existing customers to new products, like the brand’s new styling range, which launched last year. “It’s about connecting with consumers on a more one-on-one basis,” Paris said. “Then you know these consumers that go are heavily involved on social and they’re sharing it out, and then we’re connected with their friends.”

The average Beautycon attendee, said Mahdara, has about 3,500 followers on Instagram. “You’re dealing with a group of highly influential people who are beauty fanatics,” Mahdara said. “They have a say in where the industry is going right now.”

The 10 Most Interesting Things at Beautycon