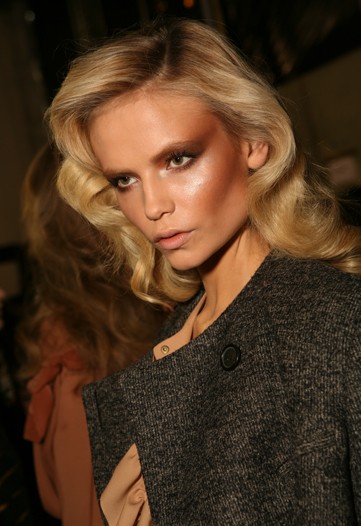 Forget global economic blues. On the Paris runways, the future—or at least next fall—is bright and painted with a punchy palette for both hair and makeup. At Chloé, makeup artist Charlotte Tilbury used chocolate brown and shimmering gold to fill eye sockets and highlight cheekbones, a look she said was inspired by “all-American sportiness, like an Antonio López drawing.” Meanwhile, Pat McGrath and Peter Philips blended hues of purple and brown for makeup at Valentino and Nina Ricci, respectively. On the more radical end of the spectrum, faces were awash with color. “[It’s a] rainbow of hues, with lots of sparkle for the evening,” said McGrath of the look she created at Dior. McGrath also played with a broad palette at John Galliano, incorporating wintry tones such as baby blue, purple and lime green to create “frozen Ukrainian brides.” At Yves Saint Laurent and Christian Lacroix, pouts were perfectly formed using shades of true red. “It’s a couture, but not an oldfashioned” look, said Stéphane Marais at Lacroix.

Crimping, meanwhile, was the watchword for coifs. At Karl Lagerfeld, the effect was big, with an Eighties spin, whereas at Givenchy, hairstylist Luigi Murenu used the technique to give models strikingly different textures and shapes. “Think New Wave, with crisp edges and graphic patterns,” he said. To get the look, he slicked hair from the forehead to the crown, giving each section a flat, wet fi nish. From the crown down, he crimped locks and left them matte. Odile Gilbert for Nina Ricci, meanwhile, plastered models’ hair down to the nape of the neck before dying it brown with washable gel. From the nape down, she left hair blonde and tonged in soft curls. “It’s pure sculpture,” the stylist explained.