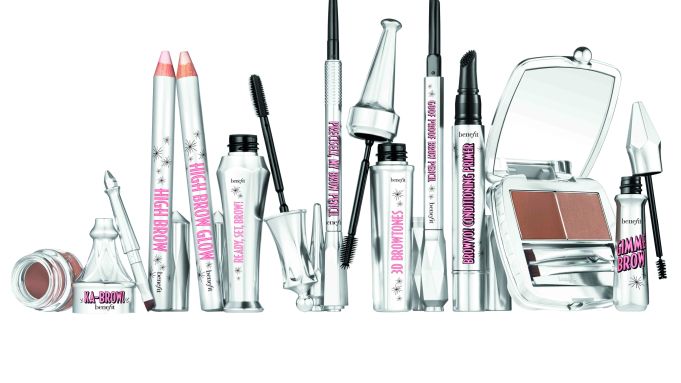 Can brow products dethrone mascara at the top of the beauty industry?

Benefit believes so, and the 45-item brow assortment it’s launching today will be an important test of the LVMH Moët Hennessy Louis Vuitton-owned brand’s plucky prognostication. “I am going to bet my bonus that brows will soon be as big or bigger than the mascara segment,” said Julie Bell, executive vice president of global marketing for Benefit. “There are two key reasons I will. Number one is that brows are multigenerational. They have the broadest age range of any segment in beauty. Everybody from a young gal to an older gal will use multiple brow products. Number two is that brows know no borders. The category is truly multicultural.”

NPD Group data shows the pervasiveness of interest in brow products. From January to March of this year, sales of brow products surged 29 percent in China, 40 percent in Korea, 26 percent in the U.K., and 36 percent in the U.S. In contrast, sales in the wider makeup category advanced 10 to 15 percent in those countries during the same period. Benefit’s fiber gel Gimme Brow is a microcosm of the brow explosion. Introduced in the fall of September 2013, it became the surprise blockbuster of the year, and millions and millions of Gimme Brow units have been sold.

Within the next two years, Alfred Stillman, general manager of the Americas at Benefit, predicts the brand’s brow merchandise could surpass its mascaras. “We are powerful in mascaras, bronzers and primers, but this is going to be the biggest category at Benefit,” he said. “Growth in the category has been phenomenal over the last couple of years. We see it being even more powerful going forward. The key is there are still a lot of women who don’t do very much for their brows. I think almost every woman you know wears mascara, but there is a huge untapped resource of women out there who haven’t yet learned that brows frame your face, and you really need to take care of your brows.”

For women who already do their brows — and those who don’t — Benefit wants to be the beauty brand that pops into mind when they consider their arches. To solidify that position, the brand three years ago assembled a team of about a dozen people across fields including marketing, packaging and product development to focus on brows. The team was tasked with pondering brow dilemmas customers encounter and approaching brows the way the hair-care sector approaches manes. “The hair industry taught us a lot of people were hungry for hair products in between their appointments,” said Bell. “We also knew there are different things you could do for your hair like there are different things you can do for your brows.”

Similar to hair color, brow color is critical. “Shade by far is the single lever that will make or break the success of a brow product. We were relentless that the shades had to be spot on,” said Bell. Products such as 3-D Browtones Eyebrow Enhancer, a brush-on highlighting gel that softens dark shades and deepens light shades, tinker with the concept of color, and the core nine products in the brow lineup contain six shades. “We felt six was a good starting point. We didn’t want to overwhelm people, but we are open to expanding,” said Bell.

Among the products Benefit expects to be strong performers in its brow selection are cream gel Ka-Brow!, Goof Proof Eyebrow Pencil and Browvo!, a conditioning primer that sold out in several cities across the country since the beginning of pre-sales on June 6, and Bell noted taps into the desire for fuller brows. Referring to Ka-Brow!, she said, “It’s so lightweight, you can go from a natural brow and really build it up. There’s nothing scary about it. We have the brush built into the cap, so it is easy to use. You don’t have to carry many things around with you.”

Consumer behavior research provided evidence to Benefit that it was headed in the right direction. The brand studied how 60 people with an array of brow product experience interacted with its brow products. From their interactions, Bell detailed the brand learned customers adore engaging with brow products, sport several of them, and don’t require an enormous dose of education to understand Benefit’s eyebrow pencils and other brow products that they might not have been that familiar with before. “The products are all self-explanatory, so you can quickly figure out what the product is and how to use it. Our whole launch strategy has been getting people to try the product,” she said.

To encourage product trial at stores, Benefit designed play stations for end caps, play station towers and tester displays housing the entire collection for customers to experiment with. The merchandising setups feature product attributes, steps to achieve brow looks, and dilemma-based content to guide shoppers to the right products for their brows. Mirrored backgrounds and multicultural model images help customers visualize products on themselves. For aestheticians offering brow services, Benefit fashioned smaller tester components to hold their preferred brow items. “The service protocol remains basically the same, but now we have the ability to sell a product as soon as the service is finished,” said Stillman. Benefit is the world’s largest employer of aestheticians.

Social media has been instrumental in turning consumer attention to brows, and Benefit has developed a massive social media outreach program to publicize its brow collection. It sent some 90 vloggers and Instagram influencers to Las Vegas in May to rev up buzz for the brow products; partnered with Snapchat for a national lens on launch day; created geo-targeted filters for retail locations and Refinery 29’s discovery channel, and leveraged Facebook and YouTube with content tailored for specific audiences. Benefit worked with the agencies Parade and 14Four on a patent-pending multislider interface that demonstrates product-facilitated brow transformations to further enhance customers’ digital experiences. On the traditional media front, Benefit is running ads in beauty and lifestyle publications, notably Elle, Marie Claire and Allure.

In the first six months on counter, industry sources estimate Benefit’s brow collection could generate $100 million in North American retail sales. “Easily after we launch, we will triple the size of our brow business. If you include services, it’s going to be a really significant part of Benefit’s overall business,” said Stillman. Speaking generally about growth at the brand, he added, “We should end the spring season with a double-digit increase, a very gratifying thing to have happen. Once we launch brows, the sky is the limit. We are expecting to see hefty double-digit increases during the fall.” And Benefit has an extensive pipeline of brow products (brow tools are the plans, for instance) to continue to raise its brow fortunes. Bell said, “This is not just a brow launch. This is a game-changer for us. We are not going to do brows and walk way.”