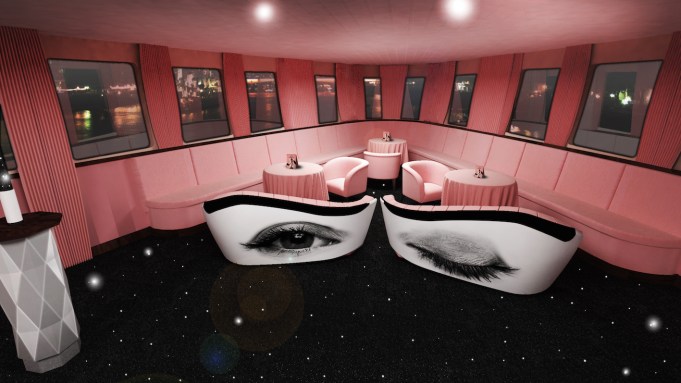 Docked at Victoria Embankment on the Thames, the Good Ship Benefit will open to the public and run for five months, from April 9 through Aug. 31. Visitors can enjoy three decks of pampering, cosmetics services, beauty treatments and food and cocktails. Rooms are devoted to a range of services including brow treatments and makeup and skin consultations.

The Porefessional Vault room focuses on treatments for the skin, and there is also a Brow Lounge. Inspired by Hawaii, the Hoola deck will feature Tiki huts and cabana-style beds, while hula girls — and boys — will serve cocktails. The main deck bar will house the ”Pinkerton Parlour” lounge for guests to enjoy a coffee or cocktail. The “Lashitude” restaurant pays homage to Benefit’s San Francisco roots with northern Californian cuisine.

This is another experiential initiative from the brand, which has staged events including “Curl’s Best Friend” for the launch of Roller Lash last year and the pop-up “Curl and Cocktail Bar” in 2014. “We want to incorporate all of our launches into experiential for the U.K., it’s a really big part of our strategy,” said Hannah Webley-Smith, Benefit Cosmetics marketing director for U.K. and Ireland.

“We do a lot of experiential things on the road as well. Our products will always do as much as possible for the customer — multifunctional “fix its” and “fake its” is part of our ethos, so that naturally spills into our experiential activity. We provide spaces and experiences for women to discover our products in a fun and inclusive way,” she added.

The brand is celebrating its 40th anniversary in the U.S., and also observing its 20th year in the U.K. “The U.K. was actually the first international location outside the U.S. for Benefit,” Global beauty ambassador Maggie Ford Danielson told WWD. “And because of that, in a lot of ways I think the U.K. customer actually gets the humor of our brand a little bit maybe more so than the American customers. Honestly, right now Benefit is the number-one makeup brand in the U.K. It’s incredible. In a lot of ways, it feels like it’s a homegrown U.K. brand but it’s actually an American brand, and it’s so well into the type of personality of the U.K. customer.”

Danielson said the brand’s Hoola bronzer is one of the bestsellers in both the U.S. and the U.K. “The funny thing about Hoola is that we launched it 15 years ago — and we literally did nothing,” Danielson said. “We have not given it one ounce of marketing support or anything, but it’s organically become the number one bronzer in two of our biggest markets globally: the U.S. and the U.K.

She said the brand is finally going to give Hoola a little love and expand the range with new products. The focus is on the liquid face, which is called Dew the Hoola. “Zero Tan Lines is a body bronzer and it’s completely matte and it also doesn’t have DHA so it’s not a soft tanner, it’s just a temporary one. It’s lightweight, you can blend it and it’s transfer resistance for up to 12 hours,” she said.

Benefit launched in 1976 in the U.S. and in 1996 in the U.K. The beauty brand has 273 stockists globally which includes more than 4,500 doors and 71 boutiques in cities including London, New York, Paris, San Francisco and Los Angeles.