The LVMH Moët Hennessy Louis Vuitton-owned brand has tripled its business in the last five years. 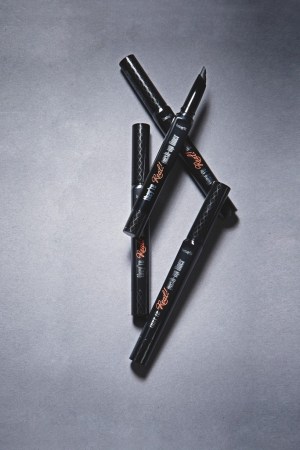 Benefit Cosmetics is playing with the big girls.

The LVMH Moët Hennessy Louis Vuitton-owned brand has tripled its business in the last five years to put it on track to cross $1 billion in revenues this year and has its sights set on getting to $2 billion in the next five years, according to estimates by industry sources.

Even as the recession ate into beauty sales, Benefit grew by sticking to a disciplined approach: making sure every new stockkeeping unit and marketing effort corresponds to its playful positioning, building customer loyalty through brow bars and boutiques, spreading abroad with select key retailers, and launching and maintaining powerful product franchises, including They’re Real mascara, which is being recharged with the global unveiling of They’re Real Push-Up Liner on June 27. While Benefit executives declined to talk numbers, market sources calculate that the new eyeliner could generate $100 million in retail global sales the first year on counter.

“Ninety percent of the success is the DNA,” said Jean-Andre Rougeot, chief executive officer of San Francisco-based Benefit Cosmetics. “This brand is a completely unique brand from a DNA point of view. It’s about fun. It’s about humor. It’s about giving women self-confidence. Our founders, Jean and Jane [Ford], gave us this wonderful brand that is fundamentally different from everybody else on the market, and there are great brands in this market. There is no brand out there that is trying to make people smile and laugh.”

Benefit’s message, however, probably wouldn’t have been heard without a few significant strategic moves. Rougeot pointed to a careful expansion in Europe around six years ago after the brand had found an audience in the U.K., where Benefit reports it is currently the number-one prestige cosmetics brand, surpassing Clinique, the longtime leader. Benefit’s expansion has been in close alliance with Sephora, which is owned by LVMH as well. Benefit is currently available in 43 countries, and 65 percent of its sales are generated outside the U.S., with about 30 percent coming from Asia, 35 percent from Europe and 35 percent from the U.S.

Continuing to expand across the world — and growing larger in its existing markets — will be paramount for Benefit to reach its next financial goals. “It’s really about getting stronger in markets where we are new,” said Rougeot. “Brazil is good example, the Middle East, Russia, Southeast Asia. These are markets that are just starting to emerge and where we think Benefit can be either number one or number two in makeup. I just came back from Southeast Asia — Indonesia, Thailand —and those markets are ready to explode.”

In the U.S., where Benefit’s business has tripled in the last five years simultaneously with the brand’s overall business tripling, Aurelian Lis, general manager of the Americas at Benefit, feels there is still room for growth. “We just need more people to know about us. Today, even in America, I would say that the brand awareness is probably 25 to 30 percent. So, when you say to people in our target group — 25- to 35-year-olds that shop in selective department stores and Sephora — ‘Do you know Benefit?’ 30 percent say ‘Yes.’ A brand like Lauder is at 90 percent,” he said, adding, “We want to be a top-three brand in any store where we’re sold.”

To boost brand awareness, Lis has steered Benefit toward being very precise about its mission and message — a strategy that has electrified a U.S. business that had been lackluster for Benefit. “We now have a very strong U.S. business based on very healthy relations with a handful of retailers,” said Rougeot.

Lis said, “The real big strategy was understanding our distribution, realizing that we didn’t have awareness and therefore doing things that made us [raise more] awareness, which was starting to say [just] one thing as opposed to 10, and being sure that you really know what your voice is. You just have to not muddy the waters too much.”

Annie and Maggie Ford Danielson, the daughters of Jean and nieces of Jane who joined Benefit in 2008, front the brand on HSN and in appearances worldwide. Maggie said, “We know where this brand came from. One of the challenges I think is, as a brand gets bigger and bigger and global, sometimes you can lose that. What I think that we bring to the table is that we’re that new generation.”

The brow bar business is also not so easy to replicate. “It’s a service business, which is fundamentally different from a product business because it’s easier to standardize a product business, and you have all these people [involved in brows],” said Rougeot. “It’s been hard to build, but once you get it, you have this loyalty, and it continues.”

Benefit has planted brow bars within both its wholesale partners’ stores and its own stores. Its own retail remains a small part of Benefit’s overall business, but it is an increasingly important part. The brand has 22 stores in the U.S. and 55 globally. “We open five or six a year in the U.S. Worldwide, we actually accelerate that a bit,” said Lis. “Benefit is not a believer in flagship boutiques. We try to find places which reflect the DNA of the brand a bit more. We tend to be more in neighborhoods because that’s where The Face Place [the Fords’ original store] came from. Princeton and La Jolla are good examples. They’re not Madison Avenue. These boutiques are designed to make sure that they’ve got a comfortableness and homey feel.”

Of course, boutiques are nothing without the products inside them. “Ninety percent of our business is makeup, and it’s done with very few stockkeeping units. We have 200 sku’s, which is very unique in the beauty world, where most brands have 1,000, 1,500 or 2,000 sku’s. That allows a lot more focus on our part, but also allows much better turns for retailers,” said Rougeot. “We’ve been lucky and maybe talented enough in the last few years to launch some really good products. They’re Real mascara is today the number-one [prestige] mascara in the world, and I think that it’s a little bit of a shocker for the industry to see that a small brand like Benefit from San Francisco has the number-one mascara in the world.” In addition to They’re Real mascara, the brand has had a hit with POREfessional, and he cited The NPD Group data showing that is the number-one prestige facial primer in the U.S.

Benefit has developed its powerful product franchises by paying attention to them beyond the launch date. “The industry has sort of gotten a bit too enamored with innovation in the way of meaningless innovation, so too many launches. There’s not enough space given to what’s the big story,” said Lis. “They’re Real and POREfessional, they’re really the backbone, pillars of the business. So, the challenge there is not about how do you launch them, it’s about how do you keep them fresh, how do you focus your attention on them, so you keep bringing new aspects to the same product.” He highlighted Benefit’s digital Realsies campaign last year — two years after They’re Real mascara was introduced — that had Benefit customers uploading photos tagged #realsies of themselves demonstrating the results of the mascara as an effective attempt by Benefit to keep its They’re Real product top-of-mind with consumers.

The latest entry in the They’re Real franchise is They’re Real Push-Up Liner, a product that took five years to perfect. Priced at $24, Benefit is touting the eyeliner as the first to offer the gel liner format in a penlike dispenser. Its rubber AccuFlex tip was designed to enable users to draw lines close to their lashes. The liner is rolling out across Benefit’s almost 4,000 doors, notably at Sephora, Ulta, Macy’s and Bloomingdale’s.

Julie Bell, executive vice president of marketing, emphasized the brand wanted to tackle an eyeliner because women love their eyes lined, but seldom love the products that allow them to do it. She detailed that Benefit’s priorities in creating the liner were to make it universal for all eye shapes, not dry out, a soft, matte black shade, and easy to use. David Monical, vice president of global packaging at Benefit, said, “It’s able to have the ease of use because once you plant it on your eye and you’re not perfectly stable, the tip holds its position and it stays in one location even though your hand may not. It still makes a straight line though you’re not making a straight line.”

As an indicator of how huge Benefit believes They’re Real Push-Up Liner can be, it is premiering a TV commercial produced with the ad agency Butler, Shine, Stern & Partners on the commercial. Hannah Malott, creative director at Benefit, explained that at the center of the commercial is a character loosely based on Lisbeth Salander in “The Girl With the Dragon Tattoo.”

“You know she’s tough,” said Malott, elaborating on the ad. It opens on a chase scene. A girl is running from 14 cop cars chasing her. She’s apprehended. There’s a fun struggle scene. She’s in the car and she thinks, ‘I can escape from this situation.’ So, she manages to get the handcuffs from back around her back to under her legs and up through and grabs her purse. Finally, she pulls out our eye liner, is applying it, and then it cuts to her mug shot taken. She just wanted to look good for her mug shot. She was never trying to escape at all.”