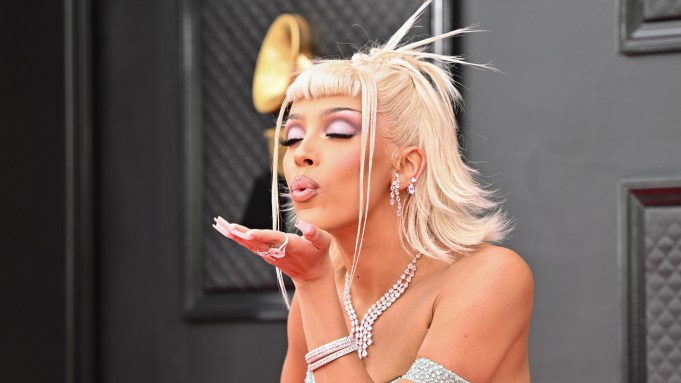 Anything goes at the Grammys, from old Hollywood glam à la Lady Gaga to pops of vivid colors, like Diplo’s electric blue hair — or even bolder, Laverne Cox’s all-fuchsia-everything.

After 11 nominations, Doja Cat won her first Grammy on Sunday for her hit featuring SZA, “Kiss Me More” — and she looked the part, turning heads in platinum blonde. The beauty chameleon, always changing up her style, opted for a half-up hairdo with short bangs and spiky, Bantu knots (a wig, it turned out). It was influenced by her dress — a bedazzled and sheer mint-colored Versace gown — as was her makeup, a glowing, frosty look. It was icy radiance, as imagined by hairstylist Jared Henderson and makeup artist Ernesto Casillas.

“Prepping the skin is essential for a glowing complexion,” wrote Casillas in a social media post, noting that he used SolaWave’s red light therapy wand to massage products by The Ordinary into her skin, “a combination of Niacinamide 10% + Zinc 1% and Hyaluronic Acid 2% + B5.”

Inspiration for glam typically comes from the ensembles; sometimes it’s subtle, other times, unmissable: Michelle Zauner of Japanese Breakfast, also in knots, had a stroke of bright yellow liner on her lids, matching the hue of her ruffled Valentino minidress; Lil Nas X gave a touch of baby blue on the inner corners of his eyes, the exact color found on his pearl-encrusted Balmain; Megan Thee Stallion wore a striking cat eye, complementing her one-shoulder animal print dress by Roberto Cavalli — leopard-patterned on the outside and zebra on the inside — and Billie Eilish, in long bangs and a layered pony, went jet black, just like her oversize, deconstructed look by Rick Owens.

Nineteen-year-old “Drivers License” singer Olivia Rodrigo channeled ’90s pop princess with glitter in her eyes — mimicking the details of her skintight, corseted Vivienne Westwood gown. Winning her first three Grammys that night, including Best New Artist, Rodrigo wore nothing but Glossier according to makeup artist Lilly Keys, who completed the look with a lightly winged eye and mixture of “Balm Dotcom” in cookie butter and “Ultralip” in villa on the lips.