Burberry is about to give a coat of lip gloss a whole new meaning. 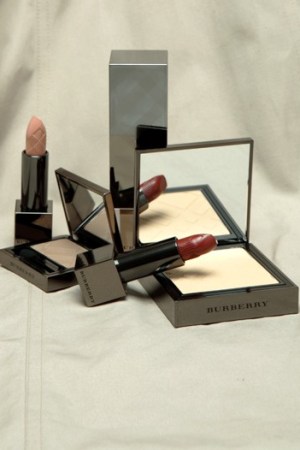 LONDON — Burberry is about to give a coat of lip gloss a whole new meaning.

This story first appeared in the April 23, 2010 issue of WWD. Subscribe Today.

The storied British fashion label and Inter Parfums, its beauty licensee, will introduce the Burberry Beauty 96-unit makeup line, which draws inspiration from the brand’s iconic trenchcoat, starting in July.

The collection is the latest addition to the Burberry luxury goods portfolio, which includes several apparel labels, timepieces, accessories and fragrances.

“[Burberry Beauty] is completely integrated with everything else we do with the brand and with the company,” said Christopher Bailey, Burberry’s chief creative officer. “It started because I felt that, at shows and the shoots, the whole [Burberry] attitude is epitomized through the shoes, the bags, the clothes, the accessories, but then the face was the one thing I really struggled with. When we were doing makeup, I felt like we weren’t able to get the right attitude. It was either caked-on makeup or then just the wrong colors, the wrong tones, the wrong spirit for makeup. I wanted it to be this kind of effortless elegance.”

Bailey noted he strived to convey in color cosmetics the easy chic of the brand’s signature trenchcoats.

“Like the trenchcoat, it can be worn anywhere and at any time,” he said, adding with the line, he aimed to offer sheer products for the face to create a natural glow, and eye, cheek and lip items that enhance women’s features.

The trench theme is evident in multiple aspects of Burberry Beauty. Its beige outer cartons, for instance, are reminiscent of the coat’s fabric, while packaging is etched with the brand’s signature check.

“I wanted it to feel like it wasn’t contrived,” he continued. “I wanted it to make the skin and the features look strong and look beautiful and highlight them rather than cover them.”

“Whereas other brands are screaming out-and-out Hollywood glamour, Burberry Beauty has created a color palette that is aspirational yet stunningly wearable,” said Annalise Quest, general merchandise manager for beauty at Harrods, which will have the U.K. exclusive for the brand for one year.

The collection, which ranges in price from 18 euros, or $24 at current exchange, for a Lip Definer pencil to 44 euros, or $59, for an 8-g. Sheer Foundation compact, also comprises blush, pressed powder, bronzer, liquid foundation, eye shadow, eyeliner, lip gloss, lipstick and mascara. (An applicator brush goes for 45 euros, or $60.)

Philippe Benacin, chairman and chief executive officer of Inter Parfums SA, said Burberry Beauty will introduce novelties on an ad hoc basis rather than conform to the industry norm of introducing seasonal collections at regular intervals.

“We don’t want to follow the same rules as the others. We’re happy doing it our own way,” he said.

“When we feel it needs a new pop of something, we will start adding things and that will all flow with fashion, as well,” added Bailey.

Burberry isn’t the only fashion brand making moves on the makeup scene. Dolce & Gabbana introduced its debut color line last year with licensee Procter & Gamble Prestige Products. The makeup brand is promoted with images of Scarlett Johansson. At the other end of the fashion spectrum, Topshop will add makeup to its lineup in May. The collection comprises a core color line plus a seasonal range. This month, French fragrance and treatment brand L’Occitane also muscled in on the makeup market with a floral-inspired collection. The color cosmetics line’s debut iteration riffs on a peony theme, and future color stories will take their cues from other flowers.

Makeup is also a departure for Inter Parfums, which has built its business primarily through sales of fragrance.

Burberry Beauty’s initial distribution will be limited to 30 doors worldwide, including — in addition to Harrods — Nordstrom in the U.S. and Lane Crawford in Hong Kong. Thirty to 40 more doors will be added next year, Benacin said.

The brand’s counters, which industry sources estimate will each generate from 500,000 euros to 1 million euros at retail, or $670,000 to $1.3 million at current exchange, in their first year, feature slick countertops, mirrors and digital screens. Bailey hopes to use the screens to stream content such as Burberry fashion shows.

“I didn’t want it to be about any one specific type or muse or face,” said Bailey. “I like the fact that it’s the same makeup on all of them, but it expresses their individuality.”