The nail-care brand is looking to take its cheeky Great Britain-inspired product names and bold colors from hand to face. 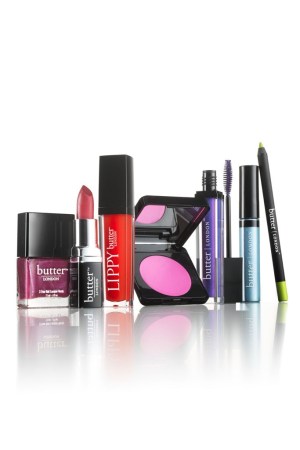 Nail-care brand Butter London is looking to take its cheeky Great Britain-inspired product names and bold colors from hand to face with a new range of color cosmetics.

Launching in August, the collection, called Butter London Bespoke Colour Cosmetics, will begin its rollout in all Ulta stores, expanding into Henri Bendel in September. By the end of 2013, the range is expected in 900 global doors. “Women have embraced wearing crazy colors on their nails,” said Leslie Freytag, president and chief executive officer of the company. “The next trend is moving that color onto the face.”

The range, initially comprised of 40 stockkeeping units, includes a vivid variety of colorful mascaras, eye pencils and cream eye shadows, bright cream blushes, buildable tinted lip balms and nail lacquers, naturally. “The nail category, as hot as it is, represents only one percent of the prestige makeup business,” said Freytag, adding that all Butter London color products will retail for $20 and below and will feature the tag line “Rock Your Colour.” “There was a huge opportunity for us to take our passion and experience with color and fashion and bring that to market in makeup.”

Butter London launched in 2006 with 45 nail lacquers, which Freytag said quickly became cult favorites thanks to high pigment payoff and the omission of carcinogens.

“With everything we do, we are careful about ingredients, and also positioning the brand around fashion,” said Freytag. “We think of ourselves as Kate and Pippa.”

In spring 2012, the brand dipped its toes into color with the launch of Lippy Liquid Lipstick, a hybrid lipstick/lip gloss. “Customers gave us permission to go beyond nail. We saw there was an opportunity to expand,” said Freytag, adding that the move into color cosmetics is one aimed at bolstering her quickly growing business.

“In 2010, we entered Nordstrom and Ulta doors, and the brand took off,” said Freytag, explaining that since its retail expansion the brand’s compounded annual growth rate is roughly 90 percent. “We became the number-two brand in prestige nail in the U.S., right behind Chanel.”

Although Butter London would not share financials on the new color range, industry insiders believe it could generate between $12 million and $15 million in its first year at retail.

“We believe the collection will appeal to new customers as well as loyal Butter London fans who appreciate the bold and playful look of the brand,” said Janet Taake, senior vice president of Ulta.

Marketing for the line will be centered on both digital and in-store initiatives. A prelaunch influencer sampling program will target brand fans and top customers, and an interactive social media/digital campaign will launch through all channels. Additionally, Katie Hughes, the brand global color ambassador, will visit select Ulta and Nordstrom doors offering “rockovers” and providing tips on how to use the multifunctional formulas, meant to be applied with fingers.

“The shades you’ll see in this collection are true to the brand in that they’re vibrant, unexpected and on trend, while our formulas are versatile, buildable, long-lasting and, of course, free of parabens and phthalates,” said Hughes.

There will be a billboard in Times Square during September’s New York Fashion Week, where the collection will also be utilized backstage.