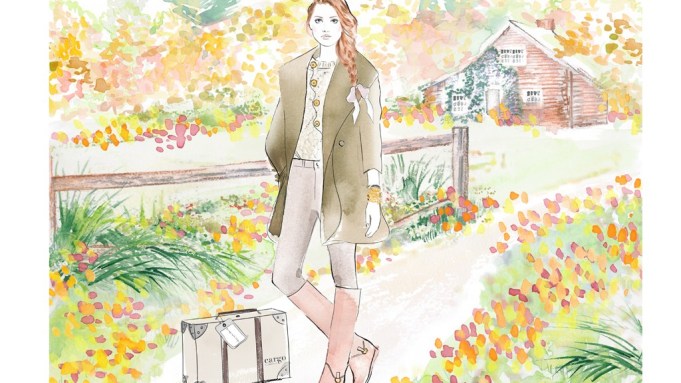 Cargo is saying bon voyage to its former look and prepping for an update.

“We found that elements of travel resonated with our consumer,” said Brian Robinson, president of TPR Holdings, adding this effort is the first major re-branding initiative for Cargo since its launch in 1996. “We felt the brand needed some fun and irreverence.”

Sold in Duane Reade Look Boutiques — where it is the number-one color brand, according to Robinson — Ulta stores and Macy’s Impulse stores, Cargo targets professional and retail consumers. The existing product lineup, which is housed in simple silver outer packaging, will be sold until the merchandise is gone, and replaced with the new items in September.

“We have very loyal customers and loyalty products, but we wanted to increase our core innovation and update the look and feel of the brand,” said Robinson. His company, which also owns beauty brands like Oscar Blandi, purchased Cargo in July 2012. “What struck me was that this is a brand that had a lot of popularity and equity with consumers and makeup artists. I felt, however, that the brand had somewhat lost its way,” he said.

To get it back on track, the brand created a new illustrated muse named Chloe, who represents the core Cargo customer and whose likeness will be featured across in-store collateral, selected gift sets, print ads as well as digitally. Each season, Chloe will travel to a different destination, marking a new limited-edition color collection for Cargo.

To illustrate this worldlier identity, the brand tapped Pascua — who has worked with fashion and beauty brands like Christian Dior, Kate Spade, Tory Burch and Bumble and bumble — to create five landscapes, including an urban city, European city, a mountain valley location, the Far East and a beach locale, for the secondary packaging. “If you line up the packaging on the shelf, you get a cityscape of the whole globe,” said Robinson. “It’s reflective of the new Cargo.”

Outer packaging will also include a top swatch of color to show consumers what shade the product is within, making it easier for quick purchasing.

According to Robinson, the overhaul was meant to appeal to an “urban, downtown girl, [who’s] eclectic and fashion-focused.”

Cargo, which is sold in approximately 2,500 doors worldwide, exited Sephora stores in late 2010, where it had been sold since the late Nineties. Although Robinson said not to rule out a potential future partnership with the retailer, for now it is focused on growing its Ulta and Macy’s Impulse businesses.

“Ulta in particular is key to growing the brand,” said Robinson, adding that the ever-expanding retailer is planning to reach 1,400 doors over the next five years. “They are increasingly committed to the color category. Ulta is in a unique situation where they have a lot of real estate to choose from outside traditional upscale malls since they are targeting strip malls in many cases.”

Although the brand declined to comment on sales figures, industry sources estimate that 2013 retail sales should approach $30 million in the U.S. By the end of 2014, Cargo is expected to generate $40 million in retail sales.

Another part of the Cargo business is its Cargo_HD line, formerly the Blu_Ray Collection, which is meant to provide the appearance of airbrushed skin under any kind of light. The line, which is sold at retail, is targeted toward professional makeup artists and consumers seeking a more intense payoff.

Cargo’s fall collection, available in September, is inspired by a “vintage escape” to a cabin in the woods of Vermont. Within it will be new items, including the brand’s first lipstick collection, $22 for each lipstick, and a new translucent powder, $32, with a mesh-technology filter that controls the amount of powder dispensed. The range will also feature an HD CC Cream for $39, HD Eye Shadow Primer for $20, four Eye Shadow single shades at $16 each and a limited-edition eye-shadow palette for $39 that’s inspired by a leather-bound travel journal. The range will be available at Ulta stores, cargocosmetics.com, Beauty.com and nordstrom.com.

This year the brand is also launching 19 counters in Debenhams in the U.K. in September. Cargo will roll out to Canada, Australia, parts of Asia and South Africa later. According to Robinson, talks are also under way in the Middle East and other developing markets.

Later this fall, Cargo will be updating its Web site and will launch a number of marketing initiatives, including print advertising, in-store events, counter builds, sampling and a social media campaign.