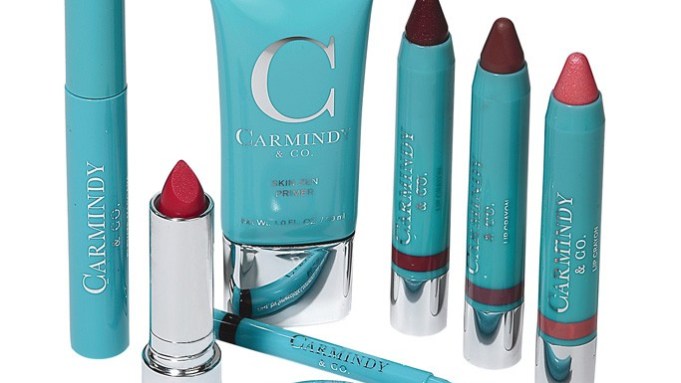 After 10 years facilitating audible gasps of excitement from everyday women, makeover guru Carmindy Bowyer is getting into the retail beauty game. Her first cosmetics brand, Carmindy & Co., inspired by the clients she’s worked with, launches on Feb. 26 and 27 during HSN’s “Beauty Report.”

“To be honest, I always thought there was a little magic in makeovers,” said Bowyer, known for her positive reinforcement and ability to play off her client’s best physical traits during her run as resident makeup artist on TLC’s “What Not to Wear.” “While I was doing the makeup on these women, the thing you didn’t see is me talking to them about what to start focusing on. It’s no longer about hiding and concealing and fixing, it’s about enhancing and empowering and embracing your beauty and using makeup to play that up.”

And with that mantra, Bowyer — known simply as Carmindy — set out to deliver a line that would help customers achieve a polished look with minimal effort and plenty of guidance.

“I created a basic wardrobe [of makeup] that allows a woman to go out in direct daylight and not feel like she is wearing a mask,” she said. “It’s for women who don’t have time for a multistep routine in the morning.”

The resulting range, manufactured by Intercos, will initially include items designed to cut away a woman’s confusion with color cosmetics: the 5 Minute Face Collection, $59; Skin Zen Primer, $32; In Bloom Lip Crayon Trio, $32; Gamechanger Foundation, $35, and MesmerEyes Smokey Eye Kit, $36. Housed in cheery turquoise packaging — Bowyer’s favorite hue — each product in the “very edited” line, designed with a nonopaque “watercolor” approach, is a direct result of her learnings throughout her career.

“What I find for the majority of women is they want fast and they want streamlined. If a product is too heavily pigmented or they aren’t sure how to use it, it sits at the bottom of their drawer,” said Bowyer. “In my chair people always say to me, ‘I want to feel like me, only better.’”

Among the line’s hero products are the 5 Minute Face Collection, which alludes to Bowyer’s book of the same name, as well as the Gamechanger Foundation, available in four shades.

“Foundation is very important to me,” said Bowyer. “I wanted something that almost gellified and became a second skin. I wanted it to be water- and sweat-resistant, and feel like you weren’t wearing anything.”

The range, which will be seasonally expanded with new offerings, also aims to help women get “Carmindized,” aka highlighted in three key places — under the brows, on the brow bone and on the inside corners of eyes and tops of cheekbones.

“It’s not only highlighting best features but really shining light and bringing sheer light into your life and beauty routine,” said Bowyer, hinting that she would like to extend her brand into categories like skin and body care. “I’m very excited to expand.”

Although Bowyer inspired a cosmetics collection for Sally Hansen in 2008 (which was discontinued in 2012) and served as spokeswoman for the brand, this is the makeup artist’s first opportunity to showcase her beauty philosophies through a product line, she said.

“This is the biggest dream come true you could ever imagine for me. I was finally able to develop products based on needs I’ve witnessed,” she said, adding that she believes distributing through HSN will perfectly align with her core consumer base.

“Having that platform of being on ‘What Not to Wear’ was amazing because I was able to get into households, I was able to be every woman’s beauty guru, be inspired and tell stories,” said Bowyer, who will give hints, tips and tricks of the trade during her HSN air time, and will be featured via social media to promote the collection. “I wanted it to continue in an entertainment space that empowered women.”

Although brand executives would not comment on financials, industry sources estimate the line could generate between $5 million and $7 million in its first year at retail.