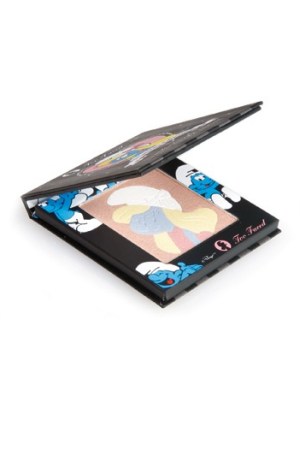 First came Rescue Beauty Lounge’s SpongeBob Square-Pants–inspired nail lacquers. Now, Too Faced Cosmetics is taking the cartoon thing a step further by giving the Smurfs a turn. Those amiable woodland creatures with the little white hats, who turned 50 years old in October, are getting their own makeup line. The Smurfette Collection, a five-item range of color items for the eyes, lips and face, launches at Sephora in December. Too Faced co-founder Jerrod Blandino was inspired to create the line after waking up at 2 a.m. wondering, “What the hell happened to Smurfette?” He decided that she was in the hills  around Los Angeles “hiding from paparazzi,” he says. “She is the most Too Faced cartoon character ever created,” he enthuses. Produced under license, the Smurfette collection includes illuminating face powder ($26); eye shadow in a quad that features blue, pink, taupe and dark lavender hues ($32.50); a jojoba, shea butter and vitamin E–infused lip gloss, $18.50, and liquid eyeliners in blue and white for $17.50 each. Come February, though, Smurfette will have competition in the cosmetics aisle, when MAC introduces a full line of Hello Kitty cosmetics and accessories, herself no stranger to the cult-classic cartoon category.

This story first appeared in the December 12, 2008 issue of WWD. Subscribe Today.