Embarking on his first major brand extension, the designer of shoes and handbags has established a joint venture with New York-based Batallure Beauty. 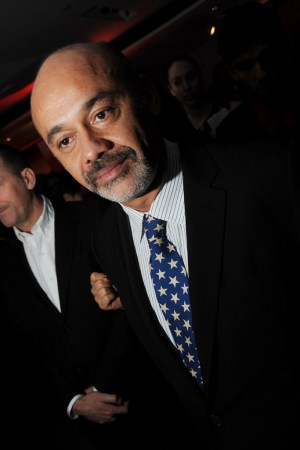 PARIS — Christian Louboutin is making the leap from red soles to red lips, WWD has learned.

Embarking on his first major brand extension, the Paris-based designer of shoes and handbags has established a joint venture with New York-based Batallure Beauty LLC to enter the beauty category.

The newly formed company, Christian Louboutin Beauté, plans to launch multiple, unspecified classifications, with the first products slated to arrive on the market in late 2013. The positioning will be luxury; the distribution global.

Yet the partners stressed they will take all the time necessary to introduce products that meet the designer’s exacting standards, and ones that promise to break the mold.

“Very constructed, quite different and unexpected,” Louboutin teased in an exclusive interview, skirting questions about specific categories he is plotting.

Yet it’s clear he’s thinking big — and unconventionally. Asked to name a beauty icon past or present that he finds inspiring, Louboutin cited one from 3,300 years ago: Nefertiti, whose painted limestone bust, now housed at the Neues Museum in Berlin, captivates the designer.

“It’s the most beautiful thing. I stayed like an hour just looking at the bust,” he enthused. “It’s a perfect beauty and the makeup is quite perfect.”

Louboutin related that several parties have approached him in recent years about potential beauty ventures, given that his signature scarlet soles could translate easily into lipsticks, nail polish and the like.

He noted the idea was also “in the air” with a so-called Louboutin Manicure entering the modern parlance thanks to a few enterprising London salons that paint red on the undersides of nails. Acclaimed British singer Adele sported such talons when she scooped up six Grammy awards for her hit album “21” earlier this year.

For his part, Louboutin said his “detail-oriented” approach to shoes should translate well to beauty products and their packaging.

What’s more, he spies direct links to his sexy, high-heeled designs. “Beauty products also have to do with empowering women,” he said. “That’s very much the job of the shoes I’m designing.”

He added that the beauty venture “has to mirror the quality of the shoes, of the bags, of all the DNA of the brand.”

Louboutin said he has resisted licensing any category in order to maintain tight control of his brand image, and he opted to partner with Batallure because its chairman and co-founder, beauty veteran Robin Burns, understood his entrepreneurial spirit and design mission.

It’s no wonder: She’s been in his shoes for years.

Burns recalled that she accepted an industry award at Lincoln Center in 1993 when she was then president of Estée Lauder USA wearing a black dress with Louboutin shoes whose vivid soles caught the eye of many people in the audience as she mounted the stairs to the podium.

“I wore his boots, his flats, his heels, his handbags — long before I met him,” she enthused, numbering her Louboutin collection at “more than a dozen.”

Burns told WWD she was attracted to Louboutin because his designs are “extremely aspirational to women” and “most beauty products that are successful have an element of aspiration to the consumer.”

“He was really the only fashion designer with high success and high visibility that has not yet entered the beauty arena,” she said, adding that “his understanding of women and femininity, and their desire to be sexy and beautiful” will translate well into beauty products.

“He pushes boundaries, and that’s exciting to us,” said Burns, who partnered with Sam Ghusson in 2006 to launch Batallure, which creates beauty brands and store experiences for such clients as Abercrombie & Fitch, Express, Macy’s, Marchesa and Sephora. Burns has also served as president and chief executive officer of Calvin Klein Cosmetics and Victoria’s Secret Beauty. Ghusson is president, ceo and co-founder of Batallure.

Burns declined to give sales projections for the Louboutin venture, but offered, “I believe it has the potential to be a significant business, and one that we will build over time.”

Louboutin, celebrating his company’s 20th anniversary this year, takes on the beauty project as the brand continues to enjoy strong momentum.

Alexis Mourot, Christian Louboutin SA’s chief operating officer and general manager, said the privately held firm continues to post “strong double-digit growth.” He declined to specify the percentage, but it is believed to be above 25 percent.

In 2008, Louboutin started rolling out a network of company-owned stores, which now account for more than half of revenues. The company has 54 boutiques at present, having opened 17 locations in fiscal 2011.

North America accounts for about 42 percent of the business; Europe, 36 percent; Asia and Japan, 15 percent, and the Middle East, 7 percent, Mourot said.

Last fall, Louboutin opened his first dedicated men’s boutique, in Paris, and the category has proven a strong growth sector. The company plans to open a men’s boutique on Washington Street in New York this summer, and a third location in London before the end of the year, Mourot noted.