With price points starting at $13, line is poised to challenge entry-level department store leaders, such as Clinique and MAC. 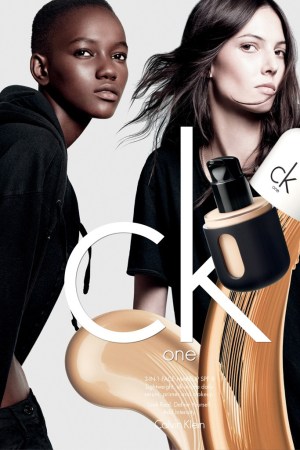 Coty Prestige aims to develop its 18-year-old CK One brand into a full beauty house with the launch of a 130-stockkeeping-unit color cosmetics line this spring.

The collection will head first into Spain’s El Corte Inglés next month, and in April to the U.S. along with a number of global markets, including Australia, France and Portugal. With price points starting at $13, it is also poised to challenge entry-level department store leaders, such as Clinique and MAC.

“CK One has maintained its status as an iconic global brand since it first launched in 1994,” said Catherine Walsh, senior vice president of American Fragrances for Coty Prestige. “With the introduction of CK One color cosmetics we go beyond fragrance, addressing the consumer’s desire to define their individuality. The new campaign, combined with innovative products, continues the CK One legacy of authenticity and accessibility by connecting consumers with the brand in a modern and vibrant way.”

“With its fragrance roots, expanding into a color cosmetics line was a natural progression for the CK One brand,” said Tom Murry, president and chief executive officer of Calvin Klein Inc. “This latest extension embodies the energy and free spirit of CK One, offering fresh and unique beauty products that are ideal for today’s youthful, independent consumer.”

Thomas Burkhardt, vice president of marketing for Calvin Klein Fragrances, noted that over the last year Calvin Klein Inc. has steadily been building CK One into a lifestyle brand, adding jeans and underwear with the name. “We felt we could fill a white space of opportunity in the market: affordable designer cosmetics,” he said. “And we believe the price positioning will also make us alluring to retailers.”

The brand aims to offer a simplified, unisex approach to beauty, although Burkhardt acknowledges the bulk of users will be female. “Every other cosmetics brand seems to be about transforming an individual,” he said. “CK One color offers a simplified approach to beauty that embraces individualism and defies stereotypes, with boundary-pushing edginess and individuality in its DNA, the CK One color vision of beauty begins with revealing your authentic, real beauty and never hiding it. CK One color is not about transformation or dramatization. It’s about looking real, defining yourself and adding intensity.”

Products are broken into nontraditional groups. Look Real products are designed to perfect skin with items such as concealers and foundation. Define Yourself products are made to define features and enhance assets, such as bronzer, blush and mascara. Add Intensity includes color cosmetics such as eye shadow, lip gloss and lipstick.

Many of the products are intended to multitask, such as 3-in-1 Face Makeup, which synthesizes serum, primer and face makeup into a lightweight formula including treated pigment technology with triple-layer amino acid. Packaging is matte black and white, with product applicators featuring two-sided textures for maximum versatility.

In the U.S., it will be exclusive at launch to Ulta. A second wave of global distribution, to include travel retail, the U.K., Germany, South Africa, Mexico and Brazil will follow in fall 2012, with the remainder of the globe getting the products in spring 2013. In each market, the brand will launch exclusively in one retailer, giving the company a chance to build the brand effectively, said Burkhardt. “It allows us to learn along the way,” he added.

While executives declined comment, industry sources estimated that the line could generate global retail sales of about $25 million in its first 18 months.

After a first effort in the Seventies, there was a Calvin Klein Collection-branded color lineup introduced in 2000 by Unilever Cosmetics International, which then held Klein’s beauty license. While the products were praised by retailers, the distribution was never expanded past its initial 120 doors worldwide. That line was phased out in 2003, when its sales were estimated at about $15 million retail. Klein’s fragrance license was subsequently acquired by Coty. In September 2005, Calvin Klein Inc. inked a deal with Markwins International for a line, launched in spring 2007, under the cK Calvin Klein Beauty name. Both the Unilever collection and the Markwins one had average price points from $14 to $50 at retail. The Markwins line is no longer sold.