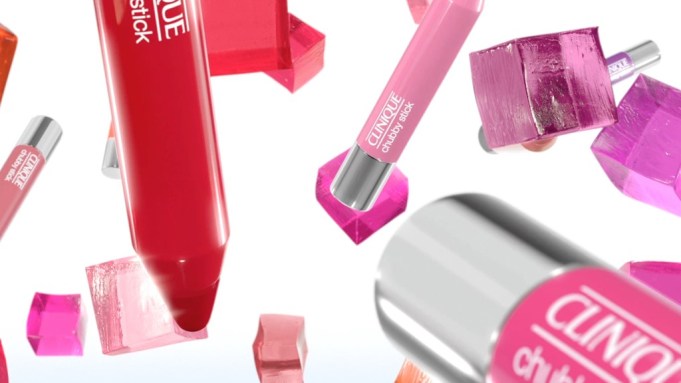 Clinique is focusing on a new category with its popular Chubby Stick lip franchise: eye shadow.

In September, the brand will launch Chubby Stick Shadow Tint for Eyes, an eye shadow in a crayonlike form. The line will be launched globally simultaneously, with the exception of Asia, which will get the line in October.

“We’ve experienced great success with our Chubby Sticks for lips since launching them last year,” said Lynne Greene, global president for Clinique, Origins and Ojon, adding that it’s the number-one lip product for Clinique. “We will add eight new lip shades to the line in June and it made perfect sense to expand the concept to the eye area. Also, we are now established as the skin care authority, which is our heritage — and expanding our strategy to color.”

The shadows go on in a sheer wash and have buildable properties, said Greene.

“We believe that this product will not only appeal to our existing consumers, but draw in a younger demographic as well,” said Ricardo Quintero, senior vice president and global general manager of market development at Clinique, citing the product’s portability and youthful shade names among the factors.

Among the biggest opportunity for Chubby Stick Shadow Tint and the new Chubby Stick lip colors, noted Agnes Landau, senior vice president of global marketing for Clinique, are consumers in the 19- to 32-year-old range.

While Clinique executives declined comment on projected sales, industry sources estimated that the Chubby Sticks for lips would do $100 million at retail globally in the next year, with the Chubby eye products adding another $30 million at retail globally to the overall Chubby franchise. In the U.S., they will be available in about 2,000 department and specialty store doors.

Print advertising for the eye products will break in September fashion, beauty and lifestyle books.

Landau noted that the brand’s North American makeup sales are up 8.3 percent this fiscal year to date, and that the lip category is up 10 percent in the same period, fueled by Chubby Stick lips. To keep the momentum going, the brand is also doing its first national TV advertising campaign for color cosmetics with a commercial for Chubby Stick lips, noted Quintero. The ad, which will begin appearing on May 7, will run for three weeks, and then will be used regionally until this fall, when another flight of national exposure is slated.

A robust digital campaign, which includes digital marketing, taxi tops and taxi TV, will also break in May. One part of the digital campaign — which will be on the brand’s Facebook page, as well as clinique.com —includes a mix-and-match concept for the lip shades, showing consumers what color will result when two or three of the colors are combined. The strategy is intended to fuel multiple buys, said Landau, adding that consumers can e-mail the results to a friend in the form of a digital kiss.