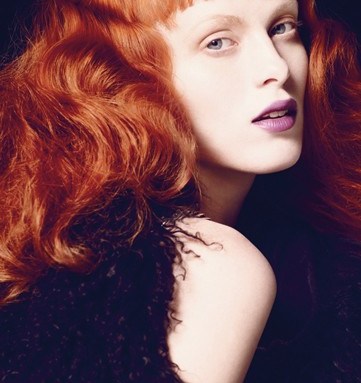 Karen Elson may be living down in Nashville, but she’s far from out.

In fact, the red-haired supermodel has proven herself to be particularly immune to the fickle tastes of fashion, with a career that’s still going strong 10 years after she first burst onto the scene staring out from the cover of Italian Vogue with shaved eyebrows and a cropped choppy bob that jutted out hither and yon.

Still an editorial darling—she’s on the September cover of British Vogue and is frequently featured in the American edition as well, Elson also recently inked a contract with the Japanese beauty company Kose. Fashion week usually finds her singing with the politically-minded cabaret troupe The Citizens Band, when she’s not hanging out with her rock-star husband Jack White of The White Stripes and The Raconteurs fame and their two children.

It’s a life as dreamy as it is unexpected for the Manchester, England, native, who grew up wanting to be either a teacher or an airline stewardess. “I lived in a small town and if your dreams were too big you were laughed at,” Elson remembers now. “I definitely had a secret desire to perform, but it wasn’t until I left home and traveled did I realize the world was so big.”

Though she’s been in the fashion business for a decade, Elson credits her longevity to a fiercely individualistic streak. “I’ve always just been myself and that’s the key. Even if you might be considered the weird-looking girl, it served me better than being the person trying to be the regular pretty girl,” she says. “I take modeling for what it is—literally at face value, because that’s all anyone else is taking you at.”

Such bluntness is typical of Elson, who’s refreshingly willing to speak her mind on issues ranging from politics to puberty. Though not a U.S. citizen, Elson became involved with The Citizens Band as a way of making her voice heard, and while she’s not bombastic, she is impassioned. “It was starting to get personally depressing for me to always have to explain to my European friends why I live in America,” she says, of her impetus for joining the group. “We’re not browbeaters. We’re not saying that what we think is better than what you think. We’re just saying that America has become very isolated from the rest of the world in the past eight years and maybe we can do something positive to help change that.”

The cabaret has become a veritable fashion world happening, with the group staging performances during runway season.

But Elson isn’t afraid to bite the hand that feeds her. A well-publicized incident in 1998, in which she was fired from the Dolce & Gabbana show for not being thin enough, has made her something of a poster child for the issue of models and eating disorders. Elson herself is as slim as an Apple notebook computer, but she does have breasts, a body part she considers normal even if fashion designers don’t. “Fashion designers work with young women who are 14, 16, 18 years old and their bodies are not developed. When my body started developing, it was shocking to them,” she says, “but what was shocking to me was that it wasn’t accepted.”

Of course, as Elson herself is the first to admit, now that she’s reached supermodel status, her curves aren’t questioned. But she’s not afraid to take on the fashion establishment on behalf of those who haven’t yet reached her level. “There needs to be more changes,” she says. “Of course, there are skinny teenagers. But once they make the transition to women, don’t try to keep them prepubescent. I know that fashion is about putting forward an image of beauty and perfection, but why can’t it be healthy? Why not a healthy gorgeous woman whose body you wish you had rather than a starving 16-year-old? If designers could make their samples one size bigger, what’s the difference?”

Moving to Nashville has helped Elson gain perspective— “To be around women whose priority isn’t necessarily to look fabulous and skinny and gorgeous all day long has been really good for me,” she laughs—as well as a healthy appreciation for life below the Mason-Dixon Line. She may not—yet— have a Southern drawl, but she makes a mean fried chicken, courtesy of Loretta Lynn’s cookbook, and is opening a vintage store in Nashville, stocked in part with her vast collection of clothes assembled during the last 10 years.

When it comes to beauty, Elson is a scent fanatic. She’s appeared in fragrance ads for Jean Paul Gaultier, Yves Saint Laurent and Anna Sui, and is absolutely besotted with Un Bois Vanille by Serge Lutens. She calls her curly hair “the bane of my existence,” and says her best makeup tip, from Pat McGrath, is to use your fingers rather than brushes.

Low-maintenance though she may be, this is still a woman with a flair for the dramatic that extends beyond her shocking red hair, alabaster skin and icy blue eyes. But for now, her acting aspirations don’t extend beyond life in a cabaret. “If somebody offered me an amazing part, I’d be interested,” she says. “But I don’t assume that just because I’m a pretty red-haired model that I can be an actress. The actresses I respect aren’t just pretty faces.”