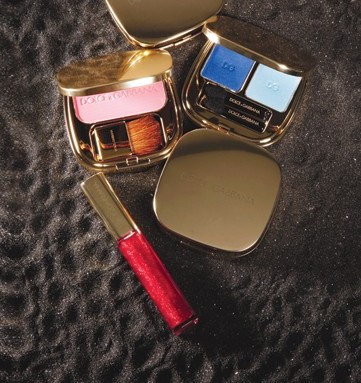 The move into makeup is seen as a springboard that could transform Dolce & Gabbana into a full-fledged beauty house and make it a brand to be reckoned with on the counter. Industry sources’ estimates of the line’s first-year sales range as high as $50 million in retail volume.

Already a hugely successful fragrance business, Dolce & Gabbana will announce its arrival into the world of color with the face of Scarlett Johansson, who will appear in the line’s advertising campaign.

In an interview with WWD, Stefano Gabbana confessed that he and Domenico Dolce have wanted to do makeup for years. “It’s a new pathway for us, and it’s not like fragrance,” he said, sitting on a velvet divan in the richly decorated drawing room of his offices here.

“We see makeup as another thing for women, like a dress. We worked on the makeup line like we work on a clothing collection — you can change makeup like you can change your clothes, depending on your mood,” Gabbana added.

Asked if he envisioned a skin care expansion for the beauty brand, Gabbana said, “There will be time for skin care in the future, but first we have to consolidate the market with our makeup.”

Dipping into Dolce & Gabbana’s familiar inspiration sources, colors in the collection include intense blues for the Mediterranean; black and gold for the volcanic island Stromboli — where the designers spend their summer vacation — and a deep burgundy that recalls the color of one of Gabbana’s favorite flowers, the dahlia.

The line’s packaging — weighty metal glossy gold with rounded edges and slipped into black velvet pouches — underscores the designers’ desire to create a beautiful, feminine object. “It’s luxury, but it’s not too extravagant, and it’s something that will last forever,” Gabbana said.

Among the initial 110 stockkeeping units are lipsticks perfumed with a trademark rose scent and mascara with a peppery olfactory note.

“We noticed that lipsticks on the market took away their fragrance, but we wanted to create makeup with a scent. Domenico and I remember when we were children and opened our mother’s handbags — the scent of her lipstick trailed out. I observed that when women open makeup, they smell it first,” said Gabbana. “I don’t use makeup, but we are fascinated with the attitude of women when they apply makeup.”

Lipstick, noted Gabbana, was the core piece of the collection. “For me, lipstick is one of the most important things. When I see a woman made-up, I look straight to the lips,” he said.

Along with licensee holders Procter & Gamble Prestige Products, the pair also enlisted makeup artist Pat McGrath to collaborate on colors and formulations. Gabbana observed, “We speak about a certain type of blue, and Pat knows the blue that we like. She’s in tune with us. We trusted her to select the mix of colors, even the bolder colors. She understands makeup.”

McGrath said women would really enjoy the feminine, glamorous elements of the line, as well as the innovative, silky touch of the formulations, which include high-quality pigmentation. “The fact that glamour in makeup is truly back means it will resonate with women. In today’s climate, it’s going to be about more, and these products really answer to that,” McGrath said.

Johansson models the looks in the sultry advertising campaign, photographed in a studio in London by Sølve Sundsbø. The images depict Johansson on a bed and are reminiscent of a Marilyn Monroe shoot.

“Scarlett is sure of herself,” Gabbana said. “She’s a beautiful girl, but she’s really easygoing. She is very Dolce & Gabbana. There’s only one photo [of the three] in the campaign that is truly Marilyn, with her gestures and her attitude. For me, a woman’s coquettishness is very important.”

Traditionally, when a high-profile designer enters the color cosmetics arena, it can have a transformative effect on the brand. But it is a process that has proven difficult in the past for some companies, due to the high cost of inventory and the expensive need for space and demonstration in the stores. For instance, ck Calvin Klein’s beauty brand was relaunched with Markwins last year, which is the design house’s third attempt at cracking the category. Versace’s line recently faded from shelves, and Ralph Lauren is preparing its second attempt at makeup, with a launch reportedly planned for fall.

Giorgio Armani has proven to be one of the recent successes in the color market, at least in terms of building sales. Historically, Chanel has been a standard bearer in fashion color. Also, YSL Beauté, Dior and Givenchy also have achieved varying degrees of success.

One factor that could dampen Dolce & Gabbana’s reception in the color market is a decline in consumer spending, stemming from the current economic crisis.

Carrie Lennard, a cosmetics and toiletries analyst for Euromonitor, said despite the overall shaky retail picture, the firm predicted sales growth for high-end color cosmetics in Italy and the U.K. over the next five years.

“The fact that the line has Procter & Gamble behind it would be enough to weather the economic times we have at the moment,” said Lennard.

Euromonitor’s preliminary data, excluding inflation, forecasts premium color cosmetics will grow at an annual compound rate of 3 percent in the U.K. and 1 percent in Italy.

Distribution will be highly selective, and Strobel named only three doors for its initial launch strategy, adding points of sales would total under 100 by 2010. Starting with Italian luxury department store La Rinascente’s Milan flagship at the end of January, the line will be unveiled in two other key retailers in March: Selfridges of London and Saks Fifth Avenue. Beyond those sales points, Strobel said he was unable to elaborate on the rollout plan. “Our strategy initially is to be in the best cities and in the best doors,” he said, outlining Paris, Madrid, Moscow and Barcelona as target locales.

Kate Oldham, vice president and divisional merchandise manager for cosmetics and fragrances at Saks, confirmed the chain has the U.S. exclusive for spring and that the line will be premiered in two doors: Fifth Avenue and Beverly Hills. It is expected to rank in the top 10, and Saks is planning to add more doors for fall.

Industry sources estimate that a high-end color line like Dolce & Gabbana The Makeup can range from $1 million annually per door to $2.5 million or $3 million for a premium flagship like Saks on Fifth Avenue.

Strobel explained that since overtaking the brand’s fragrance business two-and-a-half years ago, its turnover has grown threefold.

“Dolce & Gabbana is a top luxury brand, and if we reflect on the strength of our fragrance business, which is growing at double digits, it shows the brand has huge potential to be a total beauty player,” he added.

“Makeup is just so right for this brand — it’s the way the brand makes you feel. It has those aspects that lend themselves so well to color,” Strobel said.

Dubbed “luxury lounges,” Dolce & Gabbana The Makeup’s in-store spaces are designed by Ferruccio Laviani, who shapes the Dolce & Gabbana boutique interiors. The areas will be customized according to every store’s layout but will be outfitted with Dolce & Gabbana interior motifs: black glossy furniture with gold accents, mirrors and chandeliers. Some spaces will be closed and all will feature an area dedicated to personalized makeup consultancies.

Positioned close to La Rinascente’s main doors, Dolce & Gabbana The Makeup will be one of the luxury department store’s most important launches of 2009. The flagship, located opposite Milan’s Duomo cathedral, registered record sales in its beauty department last year.

Dolce & Gabbana The Makeup’s price positioning is high: from nail lacquer for $20; mascara for $28; lipsticks for $30, and eye shadow duos for $36, up to perfect finish powder foundation for $59. Other categories include bronzing powder, blush, eye and lip pencils, and lip gloss.

Strobel said the initial assortment would be backed by a steady flow of new products. “We have great innovation in the pipeline, the sku’s will grow very quickly with seasonal, technological and one-off products,” he said.�