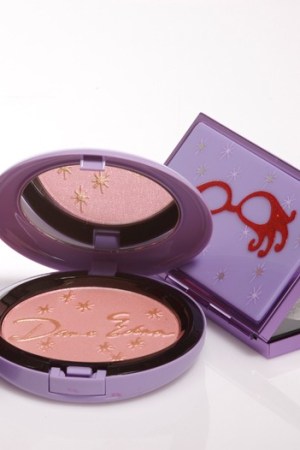 There’s a new dame in MAC Cosmetics’ arsenal: the irrepressible Dame Edna Everage, who has created an eponymous limited edition color collection for the company.

“I’m doing this out of love — I’m a giver,” said Dame Edna, the lavender-haired alter ego of Australian comedian Barry Humphries. “The audience’s applause was a little louder when I was wearing MAC on stage, so I was a convert. They didn’t have to coerce me.”

To compose the line, Edna holed up in a conference room with James Gager, senior vice president and creative director of MAC Worldwide, and Jennifer Balbier, senior vice president of product development worldwide for MAC, to brainstorm. “I sat with very keen people wearing black and came up with a range of colors, which flatter me — and I’m approaching 60 from the wrong way — as well as women of all ages,” said Edna.

The offbeat pairing is the wacky type of deal that MAC seems to delight in. “For us, Edna represents the counterculture that MAC is steeped in,” said Gager. “This is a partnership that will make people stop and take notice.”

The line’s outer packaging is lavender — to match Dame Edna’s hair — and adorned with glittery red glasses, another Dame Edna trademark. Shade names — such as Coral Polyp and Varicose Violet (“my mother has varicosity, and thus inspired the color,” cracked the comedian) — follow Dame Edna’s outrageousness. And don’t be looking for a matchy-matchy mix. “We’re not afraid to clash with colors — we have nail polishes that have nothing to do with the lip colors we’re doing,” said Balbier. “It’s a wacky, fun mix.” Dame Edna’s loopy signature is embossed on the powders.

While Edna is fond of all of the products, her favorite is KangaRouge, a blue-red lipstick. “A part of the kanga is this same color — it’s hopping over you and you look up and there it is,” she opined. “MAC has captured it. I only hope I don’t I meet an excitable male kanga.” Another major inspiration: gladiolas, the Dame’s favorite flowers, which inspired many of the shades in the lineup.

The collection includes three lipsticks, each $14; three Lipglass shades, each $14; two eye shadow trios, each $32.50; Hi-Light Powder, $26, and two shades of nail polish, each $11. All products will be on counter on Dec. 26 in the U.S. and January in international doors. In the U.S., it will be available in about 500 department stores and MAC’s 150 freestanding retail stores.

Target consumer? “The young, because the young adore me,” said Dame Edna. “The middle-aged are jealous of me.”

Promotion will take a cheeky spin: Simon Doonan has taped three interviews with the unrestrained Dame, which will be shown on maccosmetics.com, YouTube and Facebook at launch. They were shot by Miles Aldridge and styled by Patricia Field. “We’re able to give customers a lot of wack and fun with this one,” said Gager.

While none of the executives would discuss sales projections, industry sources estimated that the limited edition range would do about $2 million in retail sales. It is expected to sell out in less than a month.

What’s next for the Dame’s beauty line? She’s mulling over a line with a special added ingredient: “Mother spit — it has magical properties,” she said. “My mother is in a facility and she is now drooling in commercially viable quantities. This could be big.”