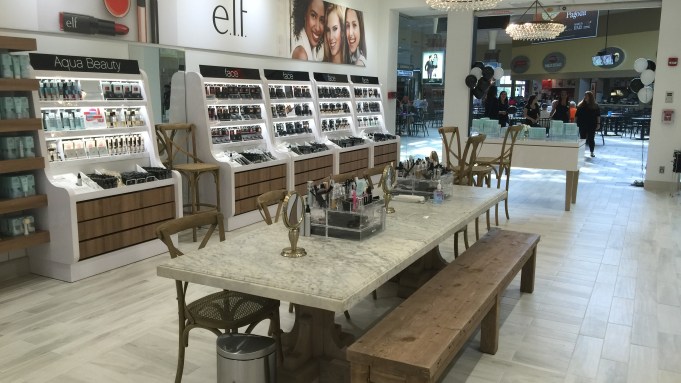 As E.l.f. Cosmetics positions to go public, it’s reaching out to the public with new stores in California.

This week, the beauty brand will break into the West Coast retail market with a store at the Fashion Square shopping center  in the San Fernando Valley neighborhood of Sherman Oaks before pushing further into the Los Angeles area with units in Glendale and Culver City. The expansion comes less than a month after E.l.f. Cosmetics described its own retail as a strategic imperative in an S-1 filed with the U.S. Securities and Exchange Commission to publicly list shares.

“Retail is an important part of our consumer engagement model, creating a unique opportunity for us to build community, drive brand awareness, and bring our brand experience to life in an experiential format,” said Ashley Aron, marketing director for E.l.f. Cosmetics, in an email, continuing, “Today’s consumer appreciates being able to experiment and try new products in a physical environment, so we believe that retail will continue to play an important role in the makeup enthusiast’s shopping agenda.”

Heralded as the first mass makeup brand with its own stores, E.l.f. Cosmetics inaugurated its standalone retail business three years ago with a flagship in Manhattan on Broadway. Since then, it’s added eight locations in New York and New Jersey. In its S-1 documentation, the brand maintains that its retail has been “highly productive and profitable.”

Increasing consumer recognition is a crucial goal for E.l.f. Cosmetics’ stores, which gives the brand billboards in the form of storefronts at highly trafficked malls and urban thoroughfares. E.l.f. Cosmetics points out most beauty consumers aren’t acquainted with it. Only 6 percent of women were aware of the brand as of August 2015 compared to 40 percent awareness for many traditional cosmetics brands in unaided measurements, according to the company. “We believe we can significantly grow this following of passionate consumers from current levels,” said E.l.f. Cosmetics in its S-1.

Stores also enable E.l.f. Cosmetics to trial products that possibly can’t be accommodated at its wholesale accounts — and it has plenty to trial. On average, it takes the brand 27 weeks to execute products from idea to online launch and 50 products were introduced last year. However, many items may not get ample exposure on-shelf. E.l.f. Cosmetics is afforded under 6 percent of the space allocated to cosmetics even at its largest retail partners. Its merchandise is available in roughly 19,000 U.S. doors, notably at Target, Old Navy, Wal-Mart and CVS.

E.l.f. Cosmetics’ stores are awash in white and wood, and feature sizable tables at their centers to encourage shoppers to put its products to the test. The brand suggests this design helps familiarize customers with seasonal products as well as perennial bestsellers, beauty tutorials and influencer recommendations. “We’ve aimed to create an environment where they can play and experiment with the best in beauty and connect with one another,” said Teresa Gefter, vice president of E.l.f. stores.

The assortment within the stores crosses the eyes, lips, face, kits, tools and skin-care categories. (The brand name stands for eyes, lips, face.) The majority of E.l.f. Cosmetics’ products are priced at $6 or below at retail. However, the brand finds customers are willing to trade up to comparatively pricier merchandise as they accumulate its products. After their initial purchase, nearly 60 percent of E.l.f. Cosmetics’ customers buy at least a second product within a year.

Going forward, E.l.f. Cosmetics has indicated it will increase its network of owned stores, but the brand declined to discuss future retail plans. In distribution outside of its stores, Target and Wal-Mart together accounted for 51 percent of the brand’s sales last year, showing how dependent it is on a few big retailers. In total, the business generated $191.4 million in sales last year, up from $144.9 million the prior year. For the six months ended June 30, E.l.f. Cosmetics’ sales hit $96.8 million.