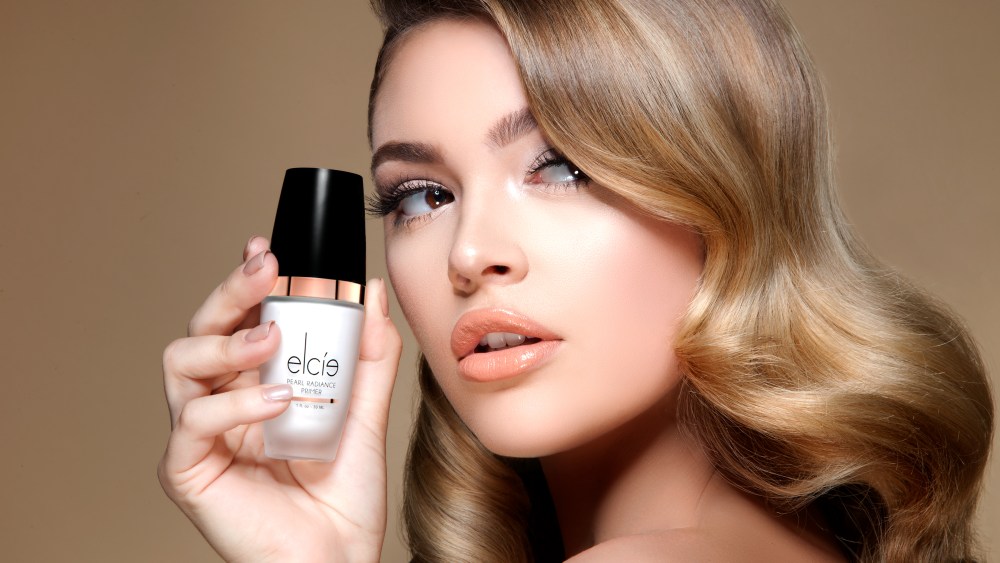 Lilit Caradanian is a professional makeup artist, but fans of her beauty brand Elcíe Cosmetics don’t have to be.

With its new release, Pearl Radiance Primer, the social media-fueled brand is continuing Caradanian’s quest to create products suiting a broad range of customers. The primer follows Elcíe’s entrance into the market early last year with Micro Silque Foundation and the subsequent launch of the dry oil The Glow Enhancer to build a high-performing assortment of essentials providing the springboard for more discretionary color cosmetics such as blushes, eye shadows and lipsticks later on.

“I’ve been in the industry for 14 years, and I’ve learned about all the different skin types that are out there, and the preferences that customers have. Based on studying my clients, I realized what we are missing in the industry, and it is those universal products,” said Caradanian, who opened Lilit’s Makeup Studio in Sherman Oaks, Calif., three years before introducing Elcíe, a phonetic spelling of her initials L.C. “I’m trying to be the brand that connects makeup to skin care. You want makeup that feels like skin care and is good for your skin, but also preps your skin well for makeup.”

When developing Pearl Radiance Primer, Caradanian sought to bring the best of oil-based primers and water-based primers together. She favors the way oil-based options with silicon fill in pores and wrinkles, but isn’t fond of their potential to slip on the face. The lightweight consistencies of water-based primers are terrific, but their failure to smooth out flaws miffs Caradanian. Her solution is a water-based formula with silica to deliver a velvety texture while lessening fine lines.

“I really wanted to have a primer that anybody can use. It doesn’t matter their age or skin type. Therefore, I went with a water-based primer because everyone can use it. If you are oily, oil-based primer isn’t for you because it moves. This primer is not going to melt or move on you. It is going to keep your makeup on all day,” said Caradanian. “There are makeup artists that don’t believe in primers, but I’m in the bridal industry, and my clients’ makeup needs to last all day. If you want long-lasting makeup, you need to have a primer on.”

Properly prepping the face for makeup application is crucial not only for brides, but for social media influencers who, subject to public scrutiny, can’t tolerate products that don’t work. Those influencers have embraced Elcíe for its products’ ability to lay a first-rate foundation for the bold makeup that goes on top. About five months after the brand premiered its foundation, digital sensation Jaclyn Hill took to Snapchat and YouTube to commend the product, and it sold out in two days. Since then, Elcíe has restocked, and other influencers, including Desi Perkins and Teni Panosian, have lauded its merchandise.

“Social media has been so important for my brand. It’s everything right now. I want to say 75 percent of my brand’s reputation comes from social media influencers and makeup lovers,” said Caradanian, herself no social media schlub. Caradanian has 1.1 million followers on Instagram under makeupbylilit, and reports she’s constantly attached to her cell phone and computer to supply various platforms with content.

While some brands driven by social media have taken the approach of issuing item after item rapidly to jump on trends and rev up buzz, Caradanian operates on a slower timetable. “I work very closely with the lab testing out products, and I don’t accept a product until I’m completely satisfied. Therefore, it takes me a lot longer [to finish a product] than the average cosmetics brand. If I’m not happy, I’m not putting it out there,” she said.

Although Caradanian’s brand is growing quickly – industry sources estimate Elcíe has ramped up to roughly $1 million in annual sales despite being in existence for not even two years – she isn’t decamping from the makeup artist chair. She sees makeup clients weekly on Fridays and Saturdays. “If I stop doing makeup, I will lose my inspiration,” she reasoned. “I’m a product junkie. I have so much makeup and, still, the second I get makeup in the mail, I’m so excited.”

Available to buy at makeup artist destination Naimie’s Beauty Center, Elcíe is largely sold online. Caradanian is considering pushing further into retail, but she’s hesitant to spread the brand to too many doors. “We don’t want to take on more than we can handle. I want to perfect my products and build good customer service before I put myself out there into the world,” she said. “It is about sharpening our brand name and trying to stand out as a brand that will always be there.”