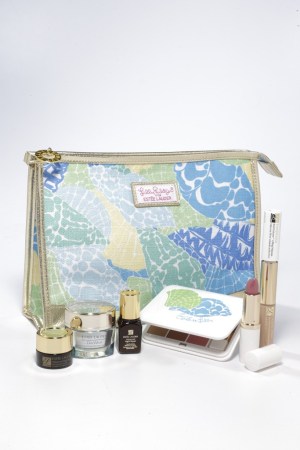 Estée Lauder has a colorful collaboration up its sleeve: a two-season, limited-edition assortment of makeup bags as a gift-with-purchase program with preppy staple Lilly Pulitzer, which bowed this week.

“Style is in our DNA, and bringing two iconic brands together to create something really fun and timeless made perfect sense to us,” said Jane Hertzmark Hudis, global president of the Estée Lauder brand, noting that the brand’s namesake had a vacation home in Palm Beach. “This is heritage done with fun.”

The program will run during the spring and summer months in 2013. The spring gwp line kicks off this week at Lord & Taylor, and will be followed by esteelauder.com on Feb. 4, Dillards on Feb. 12, The Bay in Canada on Feb. 27, Macy’s on March 5, Belk on April 1, Bloomingdale’s on April 2, Sears Canada on April 4 and Bon Ton and Nordstrom on April 16. The summer program begins at Dillard’s on May 12, Lord & Taylor on May 19, Sears Canada on May 20, Macy’s on May 27 and Belk and Bon Ton on June 1.

Bradbeer noted that the eight prints are all unique and were customized for each retailer. Retailer response was enthusiastic enough, he noted, that what was originally supposed to be a spring gwp only was extended in some retailers to include summer.

Bradbeer also noted that the company’s unabashedly colorful products have been “moving very effectively.” While he didn’t offer specifics, he added that the base business is “growing high double-digits.” The brand was acquired by Oxford Industries in the fall of 2010.