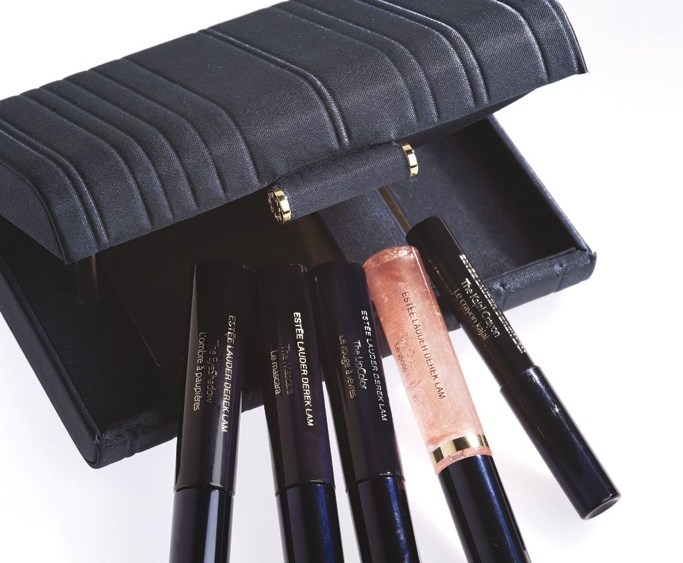 In January, Estée Lauder will launch a limited-edition Derek Lam collection, a makeup lineup that allows the designer to stick his toe into the color cosmetics pool.

While it’s unlikely that the collection will garner massive sales — industry sources estimated that the offering would generate roughly $1 million at retail in a tight lineup of about 100 specialty stores in North America and 80 overseas — the partnership moves the style needle forward for Lauder, which has been ramping up its designer game lately (case in point: new in-store employee uniforms by Opening Ceremony.) It’s the first major cosmetics fashion statement from Lauder since Tom Ford did a limited collection in 2005.

The collection will be sold as an $85 set of five products — Kajal Crayon in Near Night, a navy blue; The Mascara in Black Black; The EyeShadow in Smoked Gold; The LipColor in Smoked Blush, and The Gloss in Barely Gold — tucked inside a navy Derek Lam clutch. The satin hard-case clutch includes Lam’s signature dumbbell clasp.

Lam cooked up the collection with Tom Pecheux, creative makeup director of Estée Lauder and Lam’s longtime friend. The two have collaborated on runway looks since Lam’s first show, and Pecheux used this collection backstage at the designer’s spring runway show. Pecheux took the looks from daytime to full-on evening by adding layers of makeup as the show progressed. “It fit into a woman’s life — that’s what most women do,” said Pecheux. “Nobody has time to go back home to shower, to clean and rebuild the makeup. Girls like to add a bit of makeup to start their second part of the day and then the evening.”

“I’ve been working with Tom since my very first show and Estée Lauder for the last eight seasons,” the designer told WWD. “That longtime involvement is invaluable — we’re really working hand in hand.”

“I’m known for having a quiet palette, being a minimalist, all those kinds of words,” said Lam of his runway shows. “But working with Tom, we both wanted to go beyond that and present a real look for each show. We didn’t just want to go for the classics. Having said that, I do love the idea women could use my makeup like my ready-to-wear collection — as part of the wardrobe that creates a personality and a style. I wanted that functionality in the makeup line. I also wanted to translate what I’m seeing in fabrics and textures into the cosmetics.”

Lam could head into fragrance next. “I did a one-off fragrance in spring 2006,” he said. “We only offered it to the audience at the show — and I still get requests for it. I’ve always tried to incorporate beauty and fragrance — I see that as very intrinsic to what I do, which is not about one particular look or way of dressing, but trying to express personal style. This is another expression of style that is curated by me and Tom. We wanted it to be an elevated experience, but accessible.”

“Derek Lam and Estée Lauder share a sophisticated, aspirational aesthetic,” said Jane Hertzmark Hudis, global brand president of Estée Lauder, adding that the brand is celebrating “eight seasons of backstage beauty with a collection created by Derek and Tom that speaks to their partnership in connecting fashion, style and beauty.”