Her collection of 21 products is wrought with personal touches added for her fans. 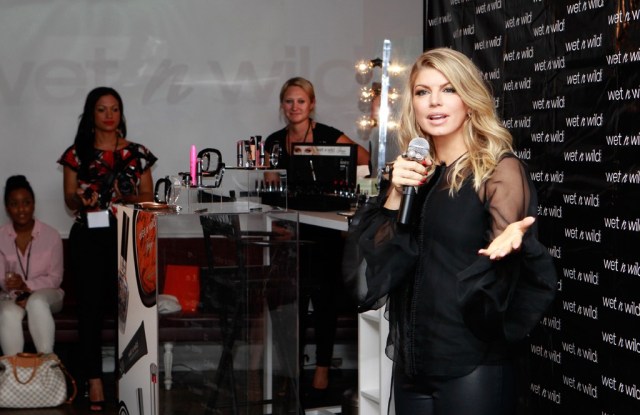 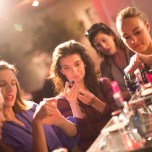 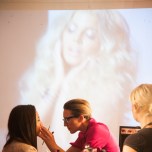 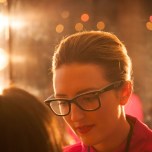 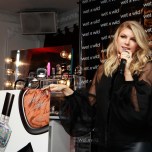 All she’s missing is the baby carriage — but perhaps not for much longer.

At least judging from the frenetic pace that Fergie tosses off business ideas. With her hands in a slew of initiatives — including sports, spirits, scent, shoes and now color cosmetics — the extroverted pop star has set her sights on “starting a family in the near future. It’s something we [she and Josh Duhamel, her husband of almost four years] are interested in doing,” she said.

Currently on break from touring, Fergie, who is working mostly from home managing her growing and multifaceted portfolio, said she simply cannot stop her “creative juices from flowing.”

“My creative energy has to go somewhere,” said the pop star, who will introduce her first color collection for Wet ‘n’ Wild in February. “I get up early and get so many things done during the day on my computer.”

Fergie, 37, whose real name is Stacy Ferguson, was appointed Wet ‘n’ Wild’s first global brand ambassador in March. Her debut color range, called Fergie by Wet ‘n’ Wild, is designed to offer consumers a lineup products that allude to the songstress’ “Fergalicious” life. “It was important to me that my line is affordable to my fans but I wanted to give it a luxury spin,” Fergie said of her range, which is priced between $3.49 and $5.99. “It’s that extra little limited-edition feel of fashion.”

After releasing two best-selling fragrances with Avon, Outspoken and Outspoken Intense, Fergie said, “It was time to transition to color.”

For Fergie, the project is particularly meaningful. “This is a brand that is truly nostalgic for me,” she said about Wet ‘n’ Wild. “For me and my Latinas in my area growing up, Wet ‘n’ Wild was the brand.”

Her lineup of 21 products includes items that reference the star’s performance needs and is wrought with personal touches added for her fans. Like many of her Black Eyed Peas songs, Fergie also took the opportunity to “shout out” some of the various nationalities in her fan base through her shade names.

The For My Primas primer (“for my cousins” in Spanish) is inspired by her Hispanic fans, while Perfect Pout Lip Color shade, Bebot Love, is for “her Filipinos” and the Carnaval in Rio Shimmer palette is for her “Brazilian fans. I love the Shimmer Palette because it works on all different skin tones,” said Fergie, who counts Brigitte Bardot and Sophia Loren among her personal beauty inspirations. “Glowing skin is so important to me.”

Industry sources estimate the range, which will be available at nearly 10,000 mass market doors as well as online, could generate between $7 million and $10 million in its first year.

Of her products, Fergie named a few that she is particularly proud of.

For one, the Lasting Drama Cream Eyeliner, which is both water- and smudge-proof, is a favorite due to its performance-withstanding abilities. “I wanted something I could wear on stage,” said Fergie, both a solo artist and a member of the Black Eyed Peas. “I hate when liner gets all over the eye.”

Another is her Take on the Day Eyeshadow Primer, which “was important to me because I use it on a daily basis,” said Fergie, who introduced the Fergie Nail Color Collection with Wet ‘n’ Wild earlier this fall.

Despite her glamorous stage and red-carpet persona, Fergie said her day-to-day look is relatively low maintenance: “Daily, I wear the Wet ‘n’ Wild Glassy gloss and my new Avon fragrance, Viva, which is coming out soon. It’s a fresh everyday scent.”

Although she isn’t touring, Fergie said she is still working on new music. “I don’t think I could ever stop working on music,” she said. “Ideas happen and they are such a gift that you have to write them down. You don’t know if you will ever get them again.”

In fact, Fergie said her album “The Dutchess,” which sold more than six million copies worldwide, was the compilation of “seven years of songs and ideas. I kept nurturing it and marinating it and by the time [it feels like] I’m done, it will be ready.”

Fergie is also designing a line of smartphone and tablet cases called the Case-Mate Collection, constantly updating her shoe lines with Brown Shoe Co. Inc. She is also a part-owner of the Miami Dolphins and a partner in Voli Vodka. “I’d also love to do something theatrical and character-driven,” said an ebullient Fergie, about her desire to return to acting.

When it comes to married life, Fergie said, “It’s a balancing act. It’s very important to make sure you nurture your relationship. We always have a date night once a week and two weeks is the longest we’ll go without seeing each other.”