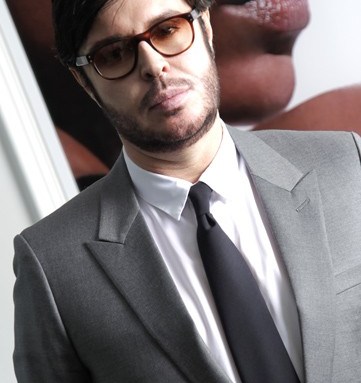 François Nars sees the world through the eyes of an artist.

An unapologetic perfectionist, Nars is a Renaissance man among makeup artists. He has created everything from a beauty brand to editorial photo layouts for magazines such as Russian Vogue. He even is doing a photo book on the island he owns in Bora-Bora. For someone who admits being painfully shy, he can be mischievous — in fact, he enjoys it.

Case in point: his best-selling Orgasm blush, which he pointed out in his new 600-square-foot freestanding cosmetics boutique at 413 Bleecker Street in New York, next door to longtime pal Marc Jacobs’ store and a stone’s throw from Magnolia Bakery.

“Sex sells, no matter what,” Nars said with a laugh, while giving WWD a sneak peek at the new store, which will open Wednesday. Most of the blushes were actually named for emotions in French and English — but he also admits he enjoys pushing buttons with his names. “I don’t ask myself too many questions about whether something is too shocking,” he said. “We’ve been copied a lot, so I guess it worked. And who doesn’t want to have an orgasm? It’s a beautiful thing.”

Nars credits Calvin Klein — with whom he worked on Obsession print ads and backstage at fashion shows — with popularizing pushing the envelope sexually in advertising. “A very sexual, loaded image worked for him so well, and he did it in such a great way, in a very sophisticated and elegant way. I feel that makeup is also such an incredible, sexy accessory. You know, women put on makeup to flirt and to really attract men.”

Despite all this talk of sex, Nars claims to be quite shy, confessing that fan adulation at personal appearances, while pleasant, is still a little overwhelming. “It’s not my favorite thing. I’m not like an actor that loves to be in front of a camera. I would rather be behind the camera. I’m more like the painter in his studio — that’s where I’m the happiest, when I’m behind my camera or creating my colors, putting on opera music. I’m not a very public, social [person].” But he can be quirky: He used his dog, Marcel, as the face of his Pro Prime skin care line.

His personality is reflected in his new store. Nars tricked out the store, which he designed with Fabien Baron, with numerous custom-made built-ins. The intimate space features a custom tester unit that takes one long wall and showcases all of the colors in the Nars line. On the boutique’s opposite wall, a mirrored wall with lighting at face level beckons, along with custom-designed trays that slide out, allowing Nars artists to easily access products when demonstrating them. Near the front door, a white fireplace mantel with a built-in bookshelf above the door beckons, filled with all of Nars’ favorite nonmakeup things — DVDs of Catherine Deneuve’s “Belle de Jour” and Barbra Streisand’s “Funny Girl,” a copy of the novel “All About Eve” and a shocking-pink copy of a biography of Elsa Schiaparelli among them. (Her devotees can find a nail polish hue bearing her name that precisely matches the book on the opposite wall.)

Such detail isn’t unusual for Nars, who said he believes in doing things right.

“I think it’s important that you know every detail when you open a store, that you pay attention to everything,” said Nars.

Plans call for about 10 stores in the next five years — London, Paris, Shanghai and Los Angeles are all on Nars’ wish list, while Louis Desazars, chief executive officer of Nars Cosmetics, is lobbying for Chicago. “It’s one of our largest markets,” he noted. Neither Nars nor Desazars would comment on projected sales, although industry sources estimated the Bleecker Street store would generate first-year retail sales of about $1 million. “The store is going to be a type of testing ground for us,” said Desazars. Elsewhere in the U.S., the brand is in about 500 specialty store doors, including Sephora, Saks Fifth Avenue, Neiman Marcus and Nordstrom.

The store also will carry products that will be available only at the boutique. The first two up: a $25 lipstick called 413 Bleecker, and a striking bento box set that features highly pigmented lipstick hand-poured into two Kabuki cups. The $125 set is packaged in a handmade box with a lip brush. Only 100 of the sets will be available. The special offerings won’t be limited to makeup, either. Nars is teaming up with Jacobs to create exclusive items for the store. One idea he’s kicking around: fingerless Marc Jacobs gloves to match Nars nail polish colors.

Nars, who grew up near Biarritz, France, and graduated from the Carita Makeup School in Paris, landed in New York City in 1984. “I cannot say I really suffered — I met the right people and I was lucky,” he said modestly of his early days in the industry. Among those who helped in those days was Guerlain creative director Olivier Echaudemaison, whom he calls a mentor. “He took me under his wing and introduced me to so many people,” said Nars. Another early mentor was famed editor Polly Allen Mellen. “She loved the transparency of the makeup, compared to what was being done at that time,” said Nars.

His love of photography began when he was 10 or 12 years old, reading his mother’s copies of French Elle. “But then I was really fascinated by the makeup part. Citing Guy Bourdin and Helmut Newton as influences of that time, he said of their photos: “I had that fascination of the transformation of those girls and the glamour that was brought into those photographs.”

Looking back, he reflected, “I’ve always been fascinated by a certain type of woman — [those] that didn’t actually wear makeup but that were very elegant, very strong. I always felt there was that very chic side of not wearing any makeup or practically very little. I think it helped me in my career creating a look for magazines.”

Nars began working with Jacobs while the designer was still at Perry Ellis, and the two formed a strong friendship that endures to this day. Nars will be the key makeup artist for the designer’s Feb. 14 show. Nars did the designer’s shows for several years before taking a break in 2000. He returned to the runway world in February 2009, creating a slightly different Eighties look for each model in Jacobs’ fall 2009 collection show. “That was fun,” he said. “It was great for me because that was the last thing I would have wanted to do is to do like a no-makeup makeup. It was exciting for me to really go crazy and paint and do a whole range of looks.” He’d like to do the same for a select few additional designers. “The problem is some designers already are working with other makeup artists — when you stop doing shows, there are other people that take over,” he said with a laugh. “I would love to work with Alber Elbaz. I love what he’s doing for Lanvin. I love Celine, I love Jean Paul Gaultier.”

Nars launched his line with 12 lipsticks at Barneys New York in November 1994. His longtime interest in photography turned professional in 1996, when he shot the first advertising campaign for his brand. He wrote and published his first book, “X-Ray,” in 1999. In 2000, he sold his company to Shiseido and purchased Motu Tané, his French Polynesian island (note to friends: He has 15 guest bungalows available) and penned “Makeup Your Mind,” an instructional makeup manual featuring well-known models, in 2001.

He’s been working on a book on Tahiti for the past eight years, with a tentative launch date of spring 2012. “I went there for the first time in 2000 and fell in love,” he said. The book features portraits and landscapes.

Nars can name the fragrances worn by his mother and grandmothers — from Reveillon and Shalimar to Caron powder — and would like to do a fragrance. Desazars pegs that project for a 2013 or 2014 launch. “François has a strong point of view with scent, which makes it an opportunity for us,” he said. Skin care will be relaunched next year. Nars also has a yen to do a makeup video, although he admits that the diversity of skin types and facial shapes could complicate matters, since the last thing he wants to do is a generic, “boring” video.

Nars has little use for those who make overblown product claims. “There are so many lies in the industry,” he said. “I’m always shocked when I see all the ads with the lashes, the mascaras, which are total lies. You see the lashes that are computer-generated or the model is wearing two pairs of false eyelashes and they’re saying those mascaras make your lashes longer to that point.”

He certainly is at ease in the West Village. “America was really the only country that gave me the possibility to do Nars,” he observed. “We are very conservative in France. The 40- to 50-year-old woman there is still set on Chanel, Dior — the big, big names.”