The color cosmetics collection is a collaboration between the makeup artist and the photographer who’s equally as (in)famous for his kinkily suggestive images. 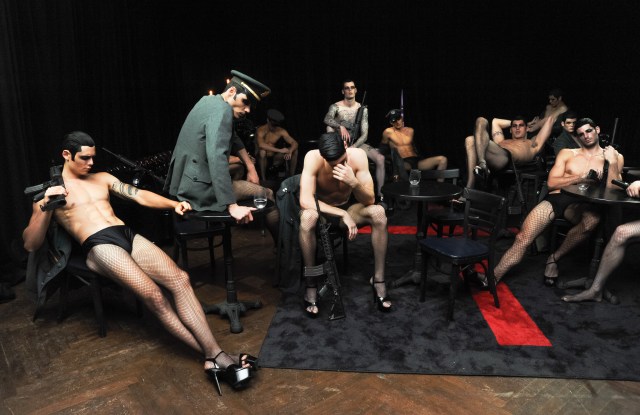 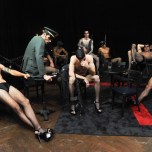 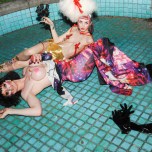 It’s not every beauty launch party that features sex dolls cavorting in an empty swimming pool in Yonkers, N.Y., but then again, this bash was thrown by François Nars, the man who gave us Orgasm blush.

This story first appeared in the August 19, 2015 issue of WWD. Subscribe Today.

On this night in June, the party was for the debut of the Steven Klein for Nars color cosmetics collection, a collaboration between the makeup artist and the photographer who’s equally as (in)famous for his kinkily suggestive images. (Madonna and horses are frequent subjects, sometimes together, sometimes not. Whips, chains and masks are often involved.)

The makeup range, due in Nars Boutiques on Oct. 15 and in the brand’s full distribution on Nov. 1, was inspired by and features the imagery of Klein. For example, the Tearjerker Eye Set, $39, features a masked mannequin (also a sex doll — natch) doing dishes, while An Abnormal Female Lip Pencil Coffret, $65, comes in a box depicting a leather-collared woman with bright red lips all over her face (no eyes) that contains an oversize red-tipped bullet with three Velvet Matte Lip Pencils. The box for Killer Heels Mini Lipstick Set, $49, which depicts black stilettos in the rain, will ensure you’ll never look at a Louboutin the same way again.

The collection’s packaging looks unlike anything else on the market today and for Nars, that is exactly the point. “By choosing the people we’re collaborating with, we’re establishing ourselves and making ourselves different from everybody,” said Nars. “There are so many makeup brands on the market, and so many products. You either love us or you don’t, but we’re distinctive, and we will be for as long as I’m here.

“I’ve always liked the weird, the different,” he continued, “very strong art, very strong movies. It’s part of my DNA. I can’t change now, it’s too late,” he said. “Take it or leave it, I can’t work for a company that only wants me to do three shades of pink.”

Despite the perceived kink, Klein insists that he’s not trying to be provocative on purpose. “People might think that I do things for shock value, but I don’t think that ever goes very far,” said Klein during a recent interview with WWD. “The world is quite shocking at the moment. So if the world is shocking, then the reaction is that people want to make things more soft-edged and appeasing, whereas I feel like you have to report things as they are. There are extreme things in fashion and on the street. Without that, everyone would be wearing a uniform.”

Nars agreed, saying it’s one of the reasons the men get along so well. “We have the same eye — we don’t have to talk for hours,” said Nars, who is also a photographer and often shoots his brand’s visuals. “We know what we like. I put collaborations together with pure instinct…I only select people if I like what they do, pure and simple.”

“What’s great about Francois is that he’s daring,” said Klein, remembering the season that Nars sent all of the models at the Marc Jacobs show down the runway barefaced. “When I talked to him about the makeup, I said, ‘The girls looked amazing. What did you do?’ And he smiled and said, ‘Nothing.’ I thought that was brilliant. He knows the parameters very well, and just how far to go.”

From the beginning, it’s been clear that this partnership was going to push boundaries, too. For one, there was that launch party, where celebrities including Charlotte Gainsbourg, Amanda Lepore and Coco Rocha gamely headed to the historic Alder Manor in Yonkers — not exactly a beauty mecca.

“It was a multimedia event,” said Klein. “I installed two live performances based on a video I did. I recreated the lighting exactly like it is in the video, so when people took pictures, they were stealing a moment of what I’d documented.” Another room required attendees to view it via a peephole; still another featured a stripper character 30 years later, with “all of the scars — anyone who’s sold their body or their beauty or their soul for money, how that scars them.”

Klein and Nars took a similarly edgy approach to the Fabien Baron-designed packaging. A $95 Kabuki brush set features a nearly nude man doing a backbend from a stripper pole, with an inside box featuring the image of a muscled man clad only in a black leather codpiece.

“I wanted to feature a representation of my work and my vision,” said Klein of the photos he and Nars selected for the compacts and outer packaging, which they chose together from a possible 100 photos.

“The diversity was really important to me,” Klein said. “Most campaigns are thematic. I liked the idea of being diverse and contradictory in terms of images.” Pointing to the Kabuki set, he added, “I also thought using a man for a women’s product was different.”

“It’s part of Steven’s work,” Nars said. “He’s photographed some beautiful boys over the years, so we thought we had to have one, at least. Who knows? Maybe it’ll be the beginning of a makeup line for men. If it’s well done, makeup looks great on men. Look at all the old film stars, like Valentino. They wore a ton of makeup.”

Klein intentionally infused the entire collection with a harder-edged sensibility as a statement against the homogeneity of traditional beauty campaigns. “Usually, cosmetics always have to do with femininity, soft and pretty and romantic,” he said. “In advertising, they’re always dealing with the aspect of prettiness. I interjected male elements, because even though women identify with a version of themselves, the male energy is also important, an intriguing and attractive factor to a woman. When Francois liked the idea of using men, I realized that people are probably more open-minded to consider different ways of viewing beauty, rather than always in this formulaic, prescribed way that’s used in advertising.”

While Nars declined to discuss sales projections, industry sources estimated that the limited-edition collection could do $20 million at retail in its 1,700 global specialty and department store doors.

Still—how the collection will play in middle America, at a time when Wal-Mart is putting Cosmopolitan magazine behind a blinder, or in more conservative markets like the Middle East, remains to be seen. Brand president Barbara Calcagni insisted there has been no backlash yet: “We had press from all over the world attend the launch event we hosted back in June, and the reception has been extremely positive so far.”