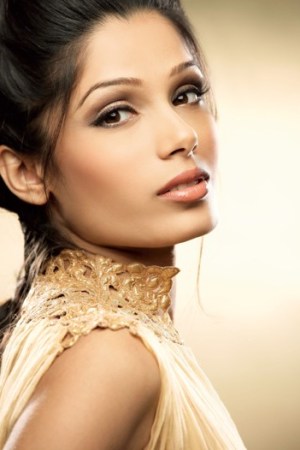 LONDON — Polishing up its link to the silver screen, L’Oréal Paris said Tuesday it has signed actresses Freida Pinto, Evangeline Lilly and Elizabeth Banks as spokeswomen.

“On the eve of the Cannes festival, to which I want to reiterate our attachment…these stars of world cinema have agreed to represent our brand,” stated Jean-Jacques Lebel, president of the L’Oréal Consumer Products Division, referring to the French film festival that opens today.

“We have been won over by their rising careers as actresses, together with their attachment to the values of humanity and diversity,” added Vianney Derville, international general manager of L’Oréal Paris.

This spring, rumors swirled in the press that Pinto, who became a household name after starring in the Oscar-winning surprise hit movie “Slumdog Millionaire,” was rumored to be in the Estée Lauder Cos.’ sights for a spokeswoman contract. The actress is shooting a Julian Schnabel movie and has been cast in a Woody Allen film for later in the year.

Lilly, best known for her role as Kate in the television series “Lost,” is no stranger to the beauty world. Last year, Coty Prestige signed the Canadian actress to front its Cool Water Woman scent worldwide, except in the U.S. She recently was featured in her first movie, “Afterwards,” which also stars Romain Duris and John Malkovich. Meanwhile, Banks, who played the role of Laura Bush in Oliver Stone’s “W,” is to feature in upcoming movies “The Details,” “Forever 21” and “What Were We Thinking.”

Meanwhile, L’Oréal gave no comment on a rumor appearing in the French press Tuesday that major executive changes are afoot in the top echelons of the luxury division.

According to a story published in the financial daily La Tribune, Odile Roujol, Lancôme’s president, should be offered a new job in the luxury division this week. She could be replaced at Lancôme by Youssef Nabi, the story speculates.

Nabi has already been replaced by Derville as the head of L’Oréal Paris. He was formerly in charge of L’Oréal’s consumer division in Asia.