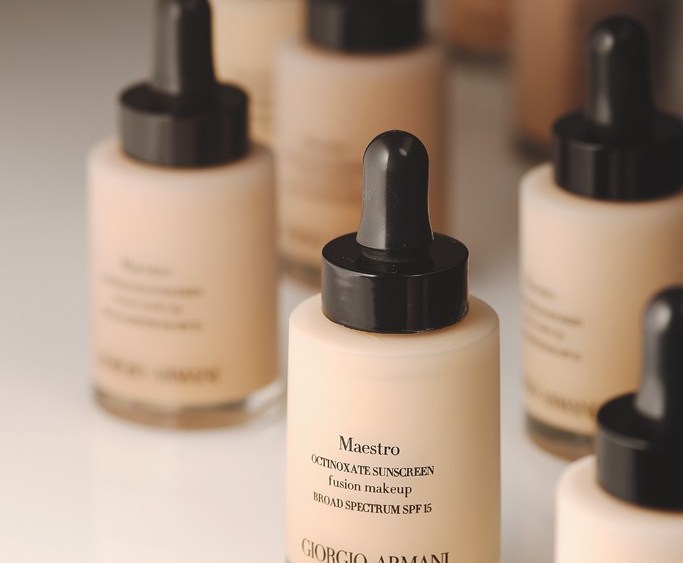 After eight years of research, Giorgio Armani Cosmetics is gearing up to release Maestro Fusion Makeup SPF15, a new formula the brand calls a “complexion perfector.”

The collection will be introduced globally in September; in the U.S., it will be on counter Sept. 15.

“This product represents a new category for Giorgio Armani Cosmetics,” said Véronique Gautier, international general manager of Giorgio Armani Parfums. “It is a complexion perfector — pigments suspended in a water-free, powder-free new formulation unlike any other product. It is not a foundation; rather a fusion of oils and pigments. Maestro will offer an unprecedented weightless texture which is the perfect addition to the wardrobe of complexion products currently offered in the Armani beauty line.”

Added Linda Cantello, international makeup artist for Giorgio Armani Beauty: “The patented Fusion technology powers the high-slip fluid with smart pigment technology, which is dispensed via a dropper. It is an ultra-fine oil-pigment suspension designed to perfect the skin.”

The product’s base is both water and powder-free, and has five time-released oils which evaporate gradually while leaving color on the skin. The formula is also noncomedogenic.

Cantello added that because oils are necessary for pigments to spread on the skin’s surface, the brand evaluated close to 100 oils based on volatility, nutrition and blending. From that group, five volatile, semi-volatile and non-volatile oils were selected. Each evaporates at different rates, maximizing color and moisture throughout the day. The volatile dry oil helps the color to glide on the skin and create an even distribution of pigment on the skin. A non-volatile complex, which includes lotus oil, has anti-free radical properties and hydrating agents and remains on the skin’s surface, she noted.

U.S. distribution will include about 130 specialty stores, including Saks Fifth Avenue. While executives declined to comment on sales projections, industry sources estimated that Maestro would do upwards of $10 million at retail in the U.S. in its first year on counter. In the U.S., it will be promoted through heavy in-store sampling, dramming and direct mail.

A complementary product, Maestro Eraser, will also be offered. Described as a hybrid of concealer, skin care and illuminator, it is designed specifically for the eye area, said Cantello. It is powered by haloxyl, which is said to eliminate bilirubin and iron — often causes of under-eye circles — as well as reinforce skin elasticity and firmness. In addition to its intended purpose, Cantello noted that she also likes to use Eraser on the tops of cheekbones, the bridge of the nose and above the upper lip to give the face a glow and contouring effect. It will be sold in six shades, each retailing for $40 for 0.5 oz.