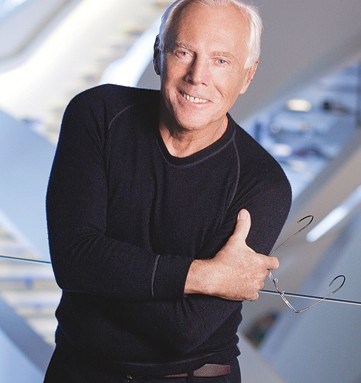 Giorgio Armani isn’t the kind of man to splash his name on just any brand extension for the sake of easy cash. This designer pours his heart and head into every product he approves, to ensure it mirrors the spirit of the brand.

His booming beauty and fragrance division, licensed to L’Oréal since 1988, is no exception.

“I’m very involved in every activity of my business, including the fragrance and cosmetics projects. I love the challenge of creating something new. It is never that easy, but always rewarding in the end,” says Armani. The silver-haired designer, whose sharp entrepreneurial acumen turned his “slouch chic” fashion vision into a $2.8 billion powerhouse, was among the first to understand the potential of licensing pacts in key categories.

“The key to realizing your dreams is to assemble the right team around you. You cannot become an expert overnight, so you should be humble enough to take the advice and direction of those who know their field well,” he notes.

His tie to L’Oréal is as strong as ever — rumors frequently resurface that he will sell a stake in his company to the French beauty giant. “I have enjoyed a  long and fruitful creative partnership with L’Oréal,” says Armani. “I believe that together, we will continue to push boundaries.”

In 1982, the designer unveiled his first Giorgio Armani women’s fragrance, Armani. A year later, he introduced Eau Pour Homme, his first men’s scent. Today, Armani boasts a dizzying 43 scents between men and women that round out the Giorgio Armani, Emporio Armani and Armani Privé lines.

In 2000, the designer launched a color cosmetics collection, and earlier this year tapped makeup artist Linda Cantello to further develop the line.

A women’s skin care line, called Crema Nera, was introduced in 2007, and a new signature women’s fragrance, alongside a new mascara and lipstick, will launch this fall.

Armani admits that, alongside a high-resonating name, a fragrance’s success is determined by a strong marketing package that includes a story, the quality of the fragrance and the ability to make a person dream. “I believe in the power of tangible scents that tell stories about life, not in extraterrestrial fragrances that have nothing to do with the human nature,” he says.

For Emporio Armani Diamonds, the designer tapped Beyoncé Knowles to represent the strong, confi dent and sexy woman he envisions. The pop star appeared in print and TV ad campaigns, and Josh Hartnett embodied the fragrance’s male version. “There is no one today who transcends music, film and fashion in the way Beyoncé does, as she represents perfectly the energy, style and sensuality that inspire the Emporio Armani lifestyle,” the designer points out.

On the makeup front, Armani is fully involved in developing his color cosmetics line. He is known to float around backstage before his runway shows to make sure the gray he commanded is just the right shade, and the lips are never too red.

“My cosmetic products are directly inspired by the way I choose my fabrics for my collections — they conceal the flaws but never completely,” he observes. “I have shaped my approach to makeup treating it like a made-to-measure garment for the skin. I translate my skills in texture and layering into a unique range of light and translucency as the diaphanous layers that form my pieces on the runway.”

According to beauty pros and insiders, Armani’s foundation is valid, as it’s the fruit of a unique technology that makes it light and fluid to enhance skin’s natural glow.

“The melody may change over time, but the music remains the same,” states Armani. “I believe in simplicity, sophistication, quality, honesty and performance. I like simple, unfussy things and have never subscribed to the idea of design for design’s sake, because I want people to wear and feel good with my products.”