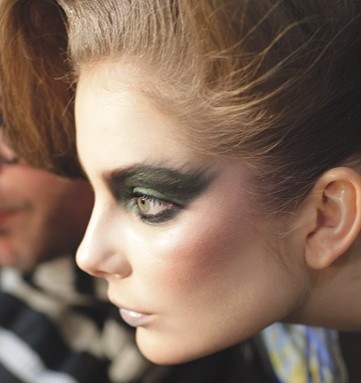 Not too many makeup artists take a 10-year sabbatical from the runways. But not every makeup artist is François Nars, who didn’t just return to the catwalk Monday night: he teamed up with Marc Jacobs to create different looks for each of the 65 models at Jacobs’ fall-winter 2009 ready-to-wear show.

Given that getting 65 models prepped with the same look for any show can be a challenge for even the best makeup artist, why did Nars and Jacobs choose to make their job, say, 65 times harder?

“Well, it certainly wasn’t the easiest path,” said Nars with a laugh during an interview Wednesday. “But from the very beginning, Marc said that he wanted all of the girls to have a different look, to celebrate their individuality. When we’d worked together before — I’d done his very first show, as well as a number of his others — the look was much more natural. This was a chance to really use the look to balance the clothes.”

“The makeup and hair were such an important part of the show this time — really acting as the accessory of the season for me,” said Jacobs in a phone interview Thursday morning. “François was exactly the right person to do this. When you have a concept, you want it to read on the runway. You can be heady or intellectual, and sometimes it doesn’t come across. With this, it was very clear what we were trying to get across — girls taking hours getting ready to go partying, but really enjoying the preparation, taking hours to get dressed. While the spirit was the same — the girls getting ready to go out — I didn’t feel like this was the time to do just one look. We had all these great girls, and we wanted to express each of their individuality. I wanted to create a party of many, not an army of one.”

The unifying factor for the makeup as a whole? Each of the looks could have stepped out of a Seventies or Eighties nightclub. “It’s like Marc mixed it all in a blender and came out with something fun and happy, so I really went for it [with the makeup],” Nars said.

Slashes of acid green shadow are seen on one model; a swipe of orange eye shadow on another. Still others sport silvers, golds, fuchsias, blacks and violets. “Marc wanted all of the girls to look like they were ready for a photo shoot in their dresses — we needed to keep the colors of the dresses, necklaces and other items in mind,” said Nars of the job done by him and his 30-member team. “It was like doing a fashion shoot. Most shows are one look. I hoped that I could make all 65 girls look good, so I was a little stressed and anxious.”

Nars, while keeping something of a low profile, hasn’t exactly been doing nothing during his decade-long break from the shows — after all, he has published “X-Ray,” a book of looks, and is working on a second one on Tahiti for a 2010 release, developed an eponymous cosmetics line of which he remains creative director, and single-handedly shot all of his ad campaigns from the past several years. “I really loved doing shows, but I got more into taking photographs,” said the multifaceted Nars. “It’s not like I wasn’t getting runway work — I just wanted to try something different. I paid my dues on the runway.”

But Nars’ longtime friendship with Jacobs spurred the return to the catwalks this season. “François is an incredible makeup artist and a great friend,” said Jacobs. “When we had this idea, I knew it was perfect for François’ skill and his way of making up girls. We spent a good part of the weekend on it — we had agreed on the vibe and then we tried lots of different looks. And the models all looked flawless. Whether people like it or not never matters to me. The important thing was, it was perfectly executed and the girls loved it. The models all wanted to go party after it — they were all dressed up with nowhere to go.”

Added Nars, “I love Marc and the evolution that his fashion line has taken over the years. While I won’t come back and do 20 shows a season, like I used to, I wanted to do this one. Marc is laid back and fun to be around. He’s always ready to laugh, and over the years, we had a lot of fun.” His criteria for future collaborators? They have to have a sense of humor. “Karl [Lagerfeld] is fun,” said Nars. “Domenico [Dolce] and Stefano [Gabbana] are great too; we always laugh and have some good times. I couldn’t work with people that don’t know how to laugh.

“The buzz this season was great. I’m liking the high you get after shows. Once you finish a show that you’ve given everything to, it’s like a rock star doing a performance. You’re wiped out, but the adrenaline goes way up.” That said, it’s adrenaline in small doses for Nars these days: “I don’t know how people can do 20 shows,” he said. “I could once, but not anymore.”

Makeup has always been a passion for the fortysomething Frenchman (he typically doesn’t comment on his exact age), who started reading Vogue practically as soon as he could talk. After attending the Carita Makeup School in Paris, Nars moved to New York City in 1984 and began working with top designers, including Jacobs, Lagerfeld and Dolce & Gabbana, and with top photographers including Richard Avedon, Patrick Demarchelier, Irving Penn and Helmut Newton. Eventually, Nars began dabbling in photography himself.

Nars’ eponymous makeup line launched in 1994, a result of his frustration at what was on the market at the time. As a market test, he launched 10 shades of lipstick at Barneys New York in November of that year. Since then, the line has grown to include close to 500 stockkeeping units. “Makeup is not a mask — the woman should shine through,” he said at the time. And he’s not above a little bit of provocation: his best-selling blush, for years, has been a peachy-pink shade called Orgasm, which is intended to…you get the picture. (He makes no apologies: “You remember the shade name, don’t you?” he said of the cult favorite. “I like memorable names.”)

Refreshingly, Nars is also upfront about the role of makeup: “It’s not rocket science,” he said. “I have to laugh when certain companies are calling out lots of complicated ingredients. I don’t like too much blah blah — makeup doesn’t need to be complicated. I am trying to keep the line basic so when you buy it, you know what it does without too much explanation.”

Beauté Prestige International, a division of Shiseido, bought the artist’s makeup business in 2000, although Nars himself remains closely involved with product development. “The essence has stayed the same, which is why the brand continues to be successful,” said Nars. “Shiseido believes in me, which in turn has helped the company age very well. And it’s the most amazing thing, the idea of women all over the world wearing your products.”

The purchase did fund Nars’ favorite relaxation place: Moto Tane, a island he now owns in French Polynesia. He typically spends about half of every year there, he said, and it has inspired the upcoming Tahiti book. “It’s basically about all of the things I find interesting about the South Pacific — the people, the landscapes. It’s not a makeup book at all, but it is my vision of what I think is beautiful, linked to my vision in other areas. It’s all related, in ways,” Nars said.

Louis Desazars, who has been Nars’ chief executive officer since January 2008, concurs. “What is fantastic about François is that there is, for him, no compromise on color or quality,” he said. “We may go through 10 or 15 submissions and, if he doesn’t like it, the product won’t be launched. I think that is why the line is so successful and why François is so successful. Nothing makes it into the line without his approval. He is amazingly talented, but he is always questioning himself, making his brand and vision stay modern. He is the driving force of this brand.”

Desazars also praises Nars’ eye for color. “The colors he loves are what are our strength today. He doesn’t do anything just for the sake of marketing.”

Going forward, said Desazars, the goal is to streamline distribution and strengthen strategic partnerships. “We would like to see a stronger Nars presence in key retailers, and innovation is now and will continue to be a very key focus,” he said.

“What made Nars successful was always expecting the unexpected,” concluded Desazars. “That will continue.”