Heatherette Heads Into Makeup With MAC 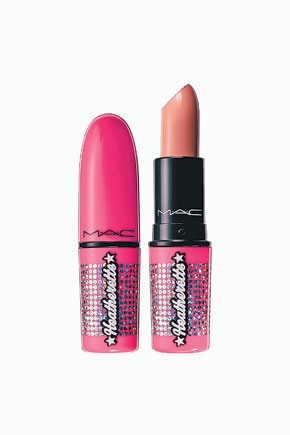 “The packaging is the candy part, but the makeup you can wear to the prom or school or whatever. The club is for bright colors,” explained Rich. “The MAC team was right on our wavelength,” added Rains. “They know Heatherette inside and out. The translation was amazing.”

Heatherette and Estée Lauder-owned MAC have created runway makeup looks together since the New York-based apparel brand’s runway debut in 2001. At that time, Rich recalled, Heatherette and MAC collaborated on a pink lipstick, but that’s where the duo’s involvement in the beauty industry stopped until now. The collection is launching on Thursday at all MAC locations, including 150 freestanding stores and 500 department and specialty stores.

“It is a bit outrageous. It has a downtown vibe to it, and it is colorful. It works well with being put into the MAC DNA,” said James Gager, senior vice president and creative director of MAC Worldwide. “It seems like a natural extension to be working with those two guys.”

About a year ago, Rich and Rains started the product development process by scooping up the contents of their studio — sequins, glitter, swatches, bows and rhinestones — and bringing them in a bag to a meeting with MAC. The compacts’ holographic foil mirror ball decal with the Heatherette logo can be traced to those sparkly origins.

Although it’s playful, Rich and Rains were careful that the collection could be worn to a nightclub and to the office. “All the creative people with MAC thought we might want neon-neon, and then we wanted wearable makeup. There was a collective sigh. It is Estée Lauder after all,” said Rich. The collection is separated into bad-girl and good-girl items, the former being showier and the latter tamer.

“There is the hands-down fashionista crowd that is going to love it….Especially being in L.A., it is great to use it in a runway translation,” said Tiffany Johnston, senior makeup artist on the MAC Pro Team. “As a makeup wearer, you can easily maneuver your way through the line. They are wearable, friendly, fun colors.”

Rich and Rains will be at a MAC store in Los Angeles to introduce the collection before stopping in New York and Miami on Tuesday and Thursday, respectively. The collection will be distributed to Canada and Europe shortly after the U.S., then will enter Asia in July and eventually will hit some 30 countries, according to Rich. Although he would not comment, industry sources estimate that the collection could generate globally more than $5 million in retail sales the first year.

Rich and Rains seemed confident that their MAC limited collection wouldn’t be the last the beauty industry hears from them. Rains had his heart set on a powder puff shaped like a corsage that got nixed in this collection, but he’d like to try again. And Rich indicated that Heatherette is considering a fragrance with Estée Lauder. “Everybody wants to smell good,” he concluded. “After the next season, we will start working on that.”