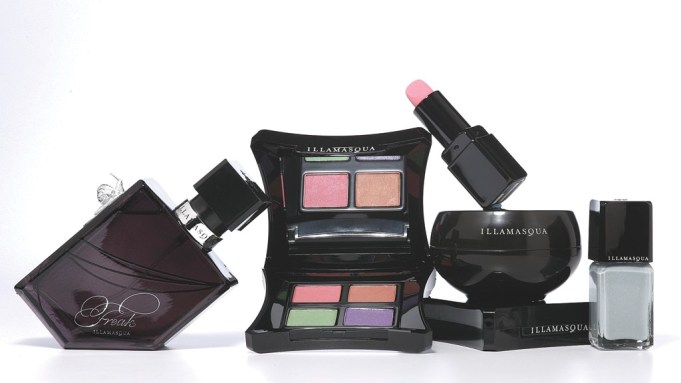 Bloomingdale’s has added a dose of theatrics to its beauty floor in the form of an exclusive counter concept from British beauty brand Illamasqua, which opened for business last week.

“Sometimes you don’t know you’re missing it until you see it,” said Howard Kreitzman, vice president of cosmetics and fragrances for Bloomingdale’s. “If you walk through 59th Street [the New York flagship], there are no open seats on the bus. The fact we felt so strongly about it and have an exclusive for the kind of shop installation in North America [is because] the architecture and design was such a departure from anything else we’ve done.”

While brand executives would not disclose sales figures, industry sources believe the first week’s performance in Bloomingdale’s was strong enough to warrant the $5 million in retail sales estimate for Illamasqua’s first year in six doors of the chain. Launched about six years ago exclusively at Selfridges with more than 650 stockkeeping units, the brand, which is centered on personal expression and creativity, aimed to differentiate itself early on. Julian Kynaston, the founder, said the brand has reached critical mass, allowing it go head to head with giants like MAC and pursue its own destiny.

“Illamasqua started out in the same premise many rock ’n’ roll bands have started out, wanting to write songs, wanting to play in front of live audiences, and now we’re in a different phase,” he said. “Trust me, the energy is going to be kept, but all of the business is now being created.”

In September 2009, the brand, which has doubled its business in the last few years, entered the U.S. exclusively through Sephora. Although select Illamasqua products continue to be sold through Sephora, only six Bloomingdale’s locations in the U.S. and Hudson Bay’s stores in Canada will feature the brand’s proprietary “living set” counters.

“The premise of this brand is theater,” said Kynaston, adding that Illamasqua’s creative director, Alex Box, is a vanguard creative force behind the brand’s new products campaigns.

“American people get us, but the challenge is we’ve had this environment where we are a tiny brand amongst Leviathans and we need people connecting with our brand,” he said. “When you have a gondola and its unmanned, you can’t talk to people about your products. What we’ve ended up doing is trading very well with products that are pretty colors [like nail varnish] but we’ve never really grown our gondola base because it’s been difficult.”

Kreitzman said he discovered Illamasqua, which immediately caught his attention, through Bloomingdale’s in Dubai, which carried it. “From the very beginning it was very successful in that store,” he said, adding that Bloomingdale’s had to wait out the Sephora exclusive. “Frankly we’ve been pursuing the brand for the greater part of two years.”

At the Illamasqua counters — including a 323-square-foot space in the 59th Street flagship — the brand will feature props like mannequin body parts, dressing table-inspired makeup stations and shattered mirrors.

“Great branding divides an audience,” said Kynaston, who founded U.K. marketing agency Propoganda in 1993. “We have the mirror test. If you don’t like it smashed, you probably have to go to Bobbi Brown. We have the snail test on the perfume [a small gastropod adorns the brand’s Freak and upcoming Freak Scarab fragrances]. If you think the snail is weird you probably need to go [elsewhere].”

Illamasqua beauty advisors, who wear aprons and caps designed by A Child of the Jago, are challenged to create theatrical looks for themselves — from wearable to the avant-garde.

For Kynaston, who is also a crusader for stopping prejudice against subcultures and supporter of The Sophie Lancaster Foundation, a major point of difference for his brand is to challenge the establishment and promote self-expression.

According to Brown, the brand, which is priced from $17 for a nail varnish to $42 for a foundation, is expanding globally both within department stores and as a stand-alone concept. With Illamasqua stores in the U.K., Dubai, Bangkok and soon Singapore, there are plans to roll them out to the U.S. Brown says the brand is also in talks for more doors in 2014 in the U.S. and Canada, Singapore, Malaysia and Indonesia, and for 2015 the brand is eyeing Russia, India and Brazil.