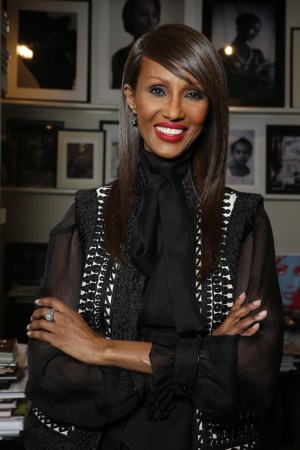 Iman is moving down the alphabet — but she’s in no rush.

Although CC creams have been on the market for more than a year, Iman wanted her take on the multitasking skin-care/cosmetics hybrid to cut through customers’ confusion and address hard-to-match multicultural skin tones.

“In my own family, my sisters, me and my mom are four different shades, so a lot of the time its not even about the ethnic background, its just the skin tone,” said Iman, founder and chief executive officer of Iman Cosmetics. “The requirements of every woman are the same, regardless if she is as light as a Swedish girl or as dark as a Nubian girl from Sudan in Africa, it doesn’t matter — everybody wants the same thing,  beautiful, flawless skin tone. Everybody is looking for that — make me look beautiful: Me. I don’t want to look like someone else.”

Iman Cosmetics CC Correct & Cover Powder to Crème Concealer, available in five shades, is a powder-to-cream formula designed to provide more coverage than the brand’s BB Crème, introduced a year ago. According to Desiree Reid, senior vice president of brand development for Iman Cosmetics, the BB Crème now represents 13 percent of the company’s face category, which is 75 percent of the total Iman Cosmetics global business. “We found it’s a new customer that’s coming to our [alphabet creams]. It’s a younger customer that’s come in and it’s a customer who likes this idea of skin care and that it’s a one-stop,” said Reid, adding that the new cream was designed to complement its predecessor. “We didn’t want to do a CC that got rid of the BB.”

“We love the BB cream for lighter coverage but obviously we have to use a concealer, for dark circles and [areas of concern],” said Iman. “It’s not a traditional concealer. It fades completely. You don’t need that much powder and it’s a perfect match — you don’t see where it starts or where it stops.”

Coinciding with the CC launch will be an Iman Cosmetics app, created in conjunction with digital company Plum Perfect, and designed to bring the beauty adviser experience to the mass sector. “At the department store, you have someone to help you but you go to the mass market, you don’t know, [product] is on a wall, you can’t touch anything. You can’t return it once you open it.”

The free app, which allows a user to snap her picture and adjust it for whatever light she is in, gives shade recommendations for foundations and powders as well as additional product options for various looks. “The goal is to give them that experience in that [drugstore] environment,” said Reid, adding that the brand is looking to translate the app into French and Spanish. “[Consumers] are taking pictures of themselves anyway so why not take that picture and be in front the [Iman Cosmetics] unit and figure out where to start — at least from a foundation perspective.”

The five new CC creams will be prelaunched online Dec. 15 and will then roll out to about 2,000 U.S. doors, including Walgreens and Target, and ulta.com on Jan. 1. Industry sources estimate the new range of CC creams could generate $2 million in its first year at retail globally.

According to Reid, the brand’s international business is also growing beyond the base of the U.S., Europe, Africa and the Caribbean. Iman Cosmetics is about to enter Dubai, and Reid said she is getting inquiries from countries like Norway and Sweden requesting more options for multicultural skin and cosmetics products.

“You have to understand your consumer, otherwise just don’t go there,” said Iman, referring to some major companies that simply stretch their assortments. “You are just becoming a jack of all trades and master of none.”