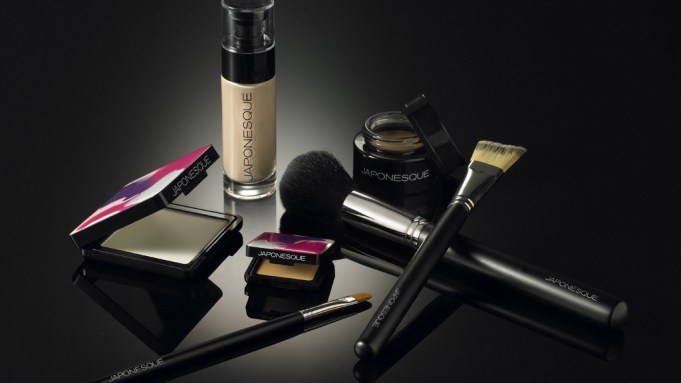 The look and feel of Japonesque’s products have set it apart in the beauty tools category for a quarter-century, and the brand believes the same will hold true when it enters color cosmetics.

San Ramon, Calif.-based Japonesque is branching into color with the launch on Oct. 27 at Ulta of 72 stockkeeping units priced from $18 to $36, encompassing face, lip and eye out of 280 makeup sku’s. In a sea of color offerings, the brand aims to distinguish its assortment with vivid componentry awash in swirls of hues and formulas created to have refined, second-skin textures.

“We knew that we could make beautiful color. Our retailer partners both here in the U.S. and the U.K. were asking us to do it and, once we found a beautiful home for the cosmetics with a beautiful handmade component, that’s when it all came together for us,” said Karen McKay, who owns Japonesque with her husband, Keith. “We started developing color cosmetics back in 2009. We were in the midst of the horrible recession, and everybody was tired of black and brown. We wanted to bring something colorful to the market.”

The multicolored swirls on top of Japonesque’s color cosmetics components are produced by hand-dripping various colors into a well that’s been filled with white gel. The process gives each component a unique pattern. “It moves like oil and water, so you can’t make them behave in a certain way. It is just going to do what it is going to do,” said McKay.

Across Japonesque’s makeup range, the Velvet Touch Foundation and Pro Performance Lip Lacquer set the bar for the texture the brand sought from its cosmetics formulations. The mousselike foundation is designed to provide a translucent matte base on the skin. The lip lacquer is meant to deliver intense color and lasting deep vinyl shine.

At Ulta, where McKay outlined that Japonesque’s cosmetics would hit 220 doors this month and another 150 doors in March, the brand’s makeup will be positioned as prestige. Janet Taake, senior vice president of merchandising at the retailer, said the high-end positioning fits because Japonesque’s cosmetics packaging “is quite beautiful. It’s really unique and quite different, and also the product itself is very professional product.”

For Japonesque’s leap into makeup to be successful, Taake continued, “It goes back to the product and the product has to really speak for itself. If it isn’t good product, the guest isn’t going to want it. I don’t know that the guest [shopping prestige cosmetics] will necessarily associate the brushes with the brand. They are at two different locations on the floor. This has to stand on its own as a color brand.”

In addition to Ulta in the U.S., Japonesque is introducing its color cosmetics at John Lewis in the U.K. Japonesque’s international distribution strategy is to select one major retailer in each country — Canada is definitely a possibility in the near future — at which to sell its color line. Industry sources estimate the color products will generate $1.5 million to $3 million in first-year retail sales.

Even before the color launch, McKay pointed out that Japonesque has been experiencing growth. “We see some good, solid increases. For example, we have seen double-digit increases at Ulta with new items and, obviously, as these chains are growing and with Ulta adding so many doors, that makes a difference as does international distribution,” she said.