Kardashians in Dispute Over Cosmetics Line 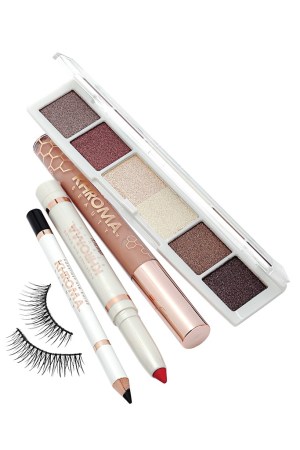 What difference does a “K” make?

That letter, made ubiquitous by the Kardashians, who have stamped it on everything from their Kardashian Kollection with Sears to their K-Dash stores, distinguishes Khroma, the cosmetics line by sisters Kourtney, Kim and Khloé Kardashian launching this winter at Ulta, from Chroma, a Beverly Hills makeup studio and brand. But Chroma Makeup Studio owners Michael Rey III and Lisa Casino argue that the letter swap isn’t stopping its customers from thinking Chroma has joined the Kardashian licensing juggernaut.

“We are one block west of Rodeo on Little Santa Monica. Everybody walks by us to get to Sprinkles. We couldn’t be any more visible, and we are disappointed that they would choose a name, regardless of whether there is a ‘C’ or a ‘K,’ that is being used already,” said Rey, adding, “For the two lines to coexist would almost be impossible because there is so much confusion.”

Chroma sent an e-mail letter and posted that letter on its Web site Monday in an attempt to diminish any confusion by informing its customers that it is not associated with the Kardashian’s makeup venture and asserting Chroma will defend its trademark and reputation. Chroma “has a long-standing reputation for high quality colour line cosmetics and services” and “is NOT endorsing low budget cosmetic products that will be sold in mass retail outlets,” read the letter.

In a rebuttal to Chroma Makeup Studio’s letter, Boldface Licensing + Branding, the licensing company creating the Khroma Beauty line, stated that it obtained the rights to use the Khroma Beauty by Kourtney, Kim and Khloé name in the color cosmetics category by filing “proper legal” documents with the U.S. Patent and Trademark Office. Boldface also declared that consumers won’t have trouble differentiating Chroma and Khroma, and took issue with Chroma’s characterization of Khroma as “low budget.”

“We do not believe that there is any likelihood of confusion between Khroma Beauty by Kourtney, Kim and Khloé and any other entity, given that Khroma Beauty by Kourtney, Kim and Khloé is clearly marketed together with the famous Kardashian brand name and will be sold with singular and distinctive trade dress,” said Boldface chief executive officer Nicole Ostoya. She continued, “We adamantly object to statements about the products’ quality due to the distribution choice and caution others who do so without any basis for such statements.”

Khroma is potentially big business for the Kardashians, and industry sources have estimated it will generate $45 million to $50 million in first-year sales. Chroma pulls in a fraction of that amount, but Rey said it has still lost money due to the similarities between Chroma and Khroma. “We feel it has devalued our line,” he said.

Although Chroma has taken no legal action against Khroma, Rey said Chroma has hired attorney Paul E. Thomas from the law firm Fredrikson & Byron to represent Chroma in court if Chroma ultimately pursues legal remedies. “At this point, it is sort of a wait-and-see situation,” said Rey “If it requires us to file legal action, we will do whatever it takes. Our goal is to resolve this in an amicable way.”

Rey elaborated: “The whole thing would go away if they didn’t have our name. Our first wishes would be to make the problem go away and not have to have this battle because of the name. Basically, that would be our first preference. Realistically, we look at it that they are the Goliath. How do we stop them from using the name? Is it going to be possible? If it is not possible, what does that mean for us? We don’t know. It has already started to hurt us. To come to some sort of amicable solution [is what we want,] what that is we don’t know. We are prepared to do anything we have to do to defend our brand and mark.”