Gaga's new line will be available to consumers in September.

Lady Gaga sees your face-tuned beauty ideals, and she wants to smash them.

That, essentially, is the message of her new beauty business, Haus Laboratories. It’s a venture-capital backed start-up that Gaga created to bring her vision of beauty to the world.

The winner of nine Grammys, two Golden Globes and an Oscar said she never felt beautiful until after she dropped out of college, moved to the Lower East Side and found a group of people who expressed themselves with makeup and fashion. They inspired her, she explained in an interview with WWD.

“Everybody looked completely different, but everybody was expressing themselves through their makeup and through their fashion and how they carried themselves and through their art,” Gaga said. “I just remember going to the drugstore one day, picking up a bunch of different things and going home and sitting in front of the mirror and really asking myself, ‘How do you see yourself?’ And then I went to work.”

She ended up creating her Lady Gaga identity. And through Haus Laboratories, that experience is what she’s trying to make available — globally — to everyone.

In the way that Rihanna’s Fenty Beauty paved the way for expanded beauty offerings for people of color, Haus Laboratories’ offering underscores Gaga’s commitment to the LGBTQ community. The brand video features a diverse cast, and the Haus of Goddess makeup trio is fronted by gender-fluid model twins Joseph and Jake Dupont. 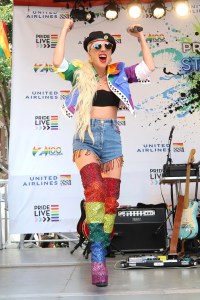 It makes sense, coming from Gaga, who showed up in New York in late June to celebrate the 50th anniversary of the uprising at the Stonewall Inn.

After all, she’s making these products for everyone, she said.

“I see something happening in the world where I think a lot of people feel a pressure to look a certain type of way,” Gaga said. “Either to look like someone else or to be so precise with their makeup and look so airbrushed and social media to fit in and to be considered beautiful, and I really want to take that idea, and I want to smash it.”

For Prime customers — Gaga is one, she said — preorder starts on Prime Day, but the makeup will not be delivered until the brand officially launches in September. For everyone else, preorder will be opened up after Prime Day, also with delivery in September.

The items come in collection format. To start, there are six different themed groupings, $49, of gloss, lip liner and shimmer powder. For a limited time, products will also be sold in duos — customers can pay $36 for two powders, $32 for two glosses and $26 for two liners. 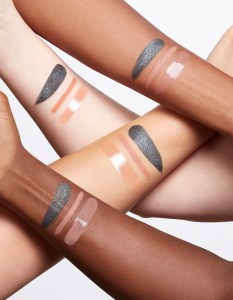 Swatches from the Haus of Chained Ballerina collection.

There’s the Haus of Chained Ballerina collection, which includes a black pearl Glam Attack with neutral liner and sheer peach gloss, and was inspired by dancers, Gaga said. “I was inspired by the fact that a ballerina would actually contour with black in order to have that really high definition from the stage,” she noted.

Then there’s Haus of Goddess, meant for every person’s goddess, Gaga said, noting that the way younger generations think about sexual identity has changed. “A goddess can be anyone, and there are many within us,” she said. “You can be a goddess no matter who you are or no matter what your pronoun is.” The collection includes a champagne-pearl Glam Attack, mauve lip liner and pink gloss.

There’s also Haus of Rockstar, which includes a gold Glam Attack with burgundy liner and gloss, and Haus of Dynasty — which Gaga notes is the collection for leaders — a group that includes an emerald Glam attack with terra-cotta liner and gloss.

The emerald was inspired by a contour product from the Seventies, Gaga said. “There used to be bronzers that were offered with this emerald pearl in them, and I was like, ‘Oh man, can we bring that back? Let’s bring that back.'”

The Haus of Rose Bitch collection is Gaga’s answer to today’s makeup trends, she said. “I see a lot of monochromatic tones, I see a full face of makeup that is meant to look like the no-makeup makeup look but you’ve gone tons of makeup on your face,” she said. “[This] is a monochromatic makeup look, but it’s not done in the way you see it on social media today.”

Gaga is into the makeup part of the equation for sure. She reviewed formulas, named products, picked components and brought in her friend and makeup artist Sarah Tanno as global artistry director for the brand.

“I’ve been sitting on the floor mixing myself like a chemist with my team,” Gaga said. Haus Laboratories chief executive officer Ben Jones said that sometimes, Gaga would text him with ideas at 2 a.m.

But while she’s certainly into the makeup aspect, Gaga says she’s created Haus Labs more for the message, which is “more important than anything.”

That message — one of inclusion and self-expression — is also why she decided to take the line to Amazon. “As someone who’s been working in the industry for over a decade, I can’t tell you the number of times that a company has said, ‘OK, we want to do this but can we just change, this, this and this because it’s a little too risky,'” Gaga said.

For Amazon’s part, the launch of a major celebrity makeup brand is something of a coup. The Amazon marketplace has struggled to land some of the major prestige brands, and big beauty launches tend to go to Sephora or Ulta Beauty.

But industry sources said that Haus Laboratories is likely to be the biggest celebrity makeup launch since the LVMH-backed Fenty, which did 500 million euros in its first year. Industry sources estimated that Haus could pull in $75 million in sales in its first full year, noting that the start-up doesn’t have the retail resources of LVMH Moët Hennessy Louis Vuitton, which also owns Sephora.

Conversations between Haus and Amazon started in later 2018, according to Nico Le Bourgeois, director of beauty and grooming for Amazon, who said both businesses aligned on the idea of “customer empowerment.”

While it’s uncommon for new beauty brands to be unveiled in July, Le Bourgeois said it is common for new concepts to launch on Prime Day. Amazon has executed successful Prime Day launches in categories like books and video games before, he said. Plus, for something like Haus Laboratories, it allows time to make more products if preorders exceed expectations.

“The preorder process gives us an amazing opportunity to have a better forecast in case of that, and we hope that’s going to be the case. [If] the sales or the preorder are much bigger than what we expected, then we have a little bit more time to manufacture more inventory,” Le Bourgeois said.

Jones called Amazon “an eventuality” for the beauty industry, but noted that, at first, he wasn’t sure about where in the beauty sphere Haus would end up. “She’s a great storyteller, and when people think of Amazon, I don’t think people think of them as storytellers,” he said of Gaga. So, with Amazon as a partner, the storytelling will take place on the brand’s own web site.

Behind the scenes, Gaga has built Haus Laboratories into a full-fledged start-up, complete with Series A venture capital backing from Lightspeed and a veteran in-house team, including Jones, who was most recently with Jessica Alba’s The Honest Company. Before that, he spent about 20 years in the video game industry.

Before he joined Haus, Jones drew a connection between the passion of beauty consumers and video game enthusiasts. “This idea of learning online, discovery, talking with friends, going to Reddits and sub Reddits — I thought that it was more like games than anything I had seen,” Jones said.

Aside from building out the products, Gaga and Jones set out to build a company. They tapped Jennifer Ritter as vice president of product development and innovation, and Nicole Frusci, formerly of Milk Makeup and Benefit, as chief marketing officer. They also tapped Ashumi Shippee as chief financial officer and Linda Kim as chief digital officer. Gaga’s official title is founder.

While Gaga did seek out investment for the brand, she’s not actually interested in selling the company. “I’m not interested in just building out a giant brand and making a bunch of money and selling it; this is my baby. I joke about it with my ceo, Ben Jones, all the time. I’m like, ‘You’re going to be prying this company from my cold dead fingers if you ever want to sell it,'” Gaga said.

She and Jones both hinted at future product launches and a one-day full makeup collection. “We have about a three-and-a-half year vision right now,” Jones said. “Gaga’s probably got a 50-year vision.”

That vision is one of her signature traits. “Over the course of my career, I’ve been called weird all the time. Even with my last album, ‘Joanne,’ I wore a pink hat with every outfit. I used to joke with my stylist — Brandon Maxwell was styling me at the time — and he was like, ‘Do you have to wear it with everything? It just doesn’t go.’ And I was like, ‘Brandon, the hat doesn’t go with anything.’ I said, ‘That’s the point.’ I said, ‘This hat goes with nothing.’ I said, ‘This is Joanne.'”

And since she started out, the limits seem to have expanded. “I joke about how when I first started, if you passed Forever 21 you would never see a leather jacket in the window, and then 10 years later, there’s leather and studs all over the place when I walk by,” Gaga said. 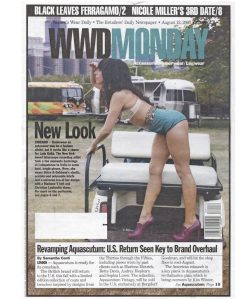 She too, has evolved since she first hit the scene. In a 2007 interview with WWD that led to her first cover, Gaga said she didn’t like to use her real name — Stefani Germanotta — because “she’s not here anymore…she’s covered in sequins.”

“The first time I ever saw myself on the cover of Women’s Wear Daily, I felt like, ‘Oh, you just might make it,'” Gaga said. “It was [shot] from the side — so, we didn’t see my face, but we will now. It will be about the makeup and not about the disco bra.”

More on Lady Gaga from WWD: