Blogger Laney Crowell is behind the clean makeup brand. 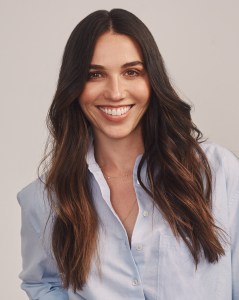 Pronounced “say,” the label is launching in November with four products: a mascara, $24; brow gel, $18; lip balm, $16, and lavender eyelash curler. It is the brainchild of blogger Laney Crowell, who has also worked at the Estée Lauder Cos. Inc. in digital communications, and web site Stylecaster, before starting the project.

Crowell said she got the idea when she went into the beauty closet for her blog, The Moment, and the there was no makeup — only skin care.

“Six months in, I went to the beauty closet looking to find some makeup because I was going out that night, and I opened the doors and was looking and looking and there was no makeup. That was like, my a-ha moment for the fact that there was a real need in the market. I went on Instagram that night and asked my community a million questions,” Crowell said.

In addition to Mycoskie and von Tobel, April Gargiulo, founder of cult skin-care brand Vintner’s Daughter, is also an investor in the brand. Crowell declined to say how much money she raised, but said it would be used for product development. In its early days, the brand has been sourcing product development ideas from Crowell’s community and a private 500-person Facebook group where members test products and give feedback.

The sustainability mission for Saie isn’t just limited to packaging — the brand bars more than 2,000 ingredients from its products, and some of those decisions were made with the environment in mind rather than toxicity to humans, Crowell said.

“We have a really strict definition, we call it the ‘Saie Standards,'” Crowell said. “We have over 2,000 ingredients that we don’t use whether that’s for our own health of our bodies or the earth, the planet…we take it a step further than a lot of brands. We don’t have anything petroleum derived, we don’t use phenoxyethanol, those are two ingredients that some brands consider clean and we had to move mountains to get out of our products.”

“There’s a lot of things that wouldn’t bother us in our bodies, our bodies can’t even absorb them, but they don’t biodegrade, so that’s really important to us as well,” Crowell said.

Initially, the brand will be sold direct-to-consumer, Crowell said, in order to keep prices down. But she considers it “omnichannel” and said she will weigh the idea of pop-ups in the future.

For more on beauty with Cindy Crawford, watch this video: