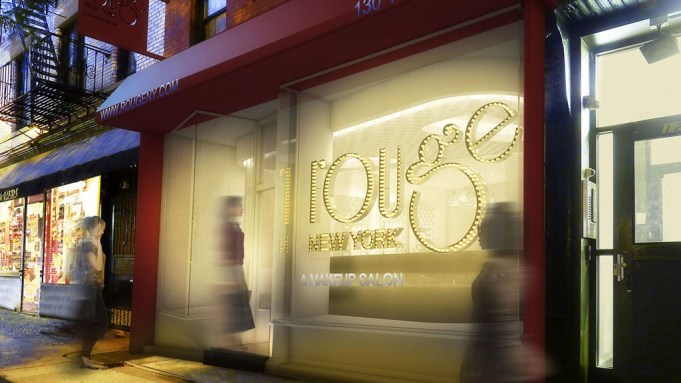 Spending long hours on TV sets can be tedious — or it can lead to new business ideas, as was the case for Stephanie March and Rebecca Perkins.

March and Perkins met on the set of “Law & Order: SVU,” where March starred as Assistant District Attorney Alexandra Cabot and Perkins headed up the show’s makeup department, and it was there that the idea for their new makeup salon, Rouge New York, which will open Wednesday, was born.

“We spent countless hours together,” said Perkins. “I was doing Stephanie’s makeup for the show every day and a lot of the time she was going out after work — so we’d kick the look up a notch.” (Or, as March cheerfully says, Perkins “de-lawyered” her.)

“Stephanie got great feedback, and we started thinking, ‘Hey, you can go anywhere for a blowout. But where can you go where you’re not sitting out on the floor of a department or specialty store to get your makeup done?’” added Perkins. “Rouge is a makeup salon — like a blow-dry salon or a nail salon but for your face.”

“We saw a real gap in the market,” said March. “So we decided to be our own customers. Great makeup doesn’t have to be — and shouldn’t be — a luxury. Makeup artists should be accessible to all women. Gorgeous makeup isn’t easy to do on your own for most people.”

The 800-square-foot store, at 130 Thompson Street in Manhattan’s SoHo neighborhood, is a six-chair salon, and each station is equipped with an iPad loaded with makeup inspiration to draw from.

Key services include You…Only Better, intended to enhance features and provide natural polish, $50; Bold Choice, $60, which helps customers find the perfect pop of color and shows how to use it, and Total Polish, $75, which provides a black-tie, red-carpet-worthy look. The salon also offers makeup touch-ups for $25; tattoo covering for $15 per tattoo; eyebrow and lip/chin waxes, $20 and $15, respectively, and eyebrow touch-ups, $10. House calls can also be arranged for $125 per hour with a two-hour minimum.

While the salon isn’t intended to be a makeup store, everything used on clients is available for sale. Clients are also encouraged to bring their own favorite products, and Perkins and March have put together a Rouge-branded product line.

“Our intent was to only make products we thought were missing at retail,” said Perkins, naming an eye shadow primer and a toning mist which preps skin for makeup application as examples.

In total, there will be 87 stockkeeping units of Rouge New York Signature products, with prices ranging from $7.50 for an Eyebrow Spoolie to $32 for an 8-oz. bottle of Soothing Owyhee Mist.

Perkins said she’s also particularly proud of the 16 makeup brushes in the line. “As a makeup artist, that’s something that’s really important to me,” she said. The salon will carry an additional 296 sku’s from other vendors — including Face Stockholm, Julie Hewett and Yaby — when it opens.

The salon will be open weekdays from 7 a.m. to 8 p.m., 9 a.m. to 8 p.m. on Saturdays and 9 a.m. to 6 p.m. Sundays to accommodate the widest variety of schedules. Appointments can be booked online, and walk-in guests are also welcome, said March. Appointments range from 10 minutes for lashes to 45 minutes for Total Polish. Provided all goes well with the Thompson Street location, March and Perkins hope to expand the concept to other New York City neighborhoods and perhaps eventually to other cities. “Essentially, though, we will always have a neighborhood feel,” said March.

While March and Perkins declined to discuss financial details, industry sources estimated that the enterprise would generate $1 million or more in its first year.