Open not long after confinement was lifted in the French capital, in early June, on the first floor up L’Atelier Maquillage, or Makeup Atelier, collects eight color-cosmetics brands in one circular location.

“We wanted to open a new page and create an unprecedented beauty concept that unites for us the market’s makeup players of reference infused with service,” explained Axelle Royère, beauty director at Le Bon Marché. For her, this marks a second act of the Beauty Loft concept, on the same floor, which debuted in 2015 showcasing alternative brands.

Before, makeup at Le Bon Marché was only found on the ground floor, mixed in with other beauty categories.

“We have a skin-care offer that is rather clearly expressed and a perfume offer, as well,” explained Royère. “It is true that until now, the makeup references were quite fragmented in terms of zoning and retail expression.”

So she and her team went to work for 18 months to conceive the new department.

“For us, makeup is a fashion accessory,” the executive said. “It is a vector of self-affirmation, the expression also of a certain femininity, so we wanted voluntarily to position this area at the juncture between women’s fashion. You have the room of designer [labels] to the left, the sportswear room to the right and the large lingerie space [behind]. It’s a hyphen between these different categories.”

Service, she says, is the makeup department’s backbone. That includes three treatment rooms, where it’s possible to get, for instance, eyebrows threaded (for the first time at Le Bon Marché) by the Blink Brow Bar.

The Japanese brand Suqqu, another new exclusive in France at the store, has its own treatment room, too, where clients’ skin can be prepared for a makeup application with ritual massages, such as the Gankin Massage. 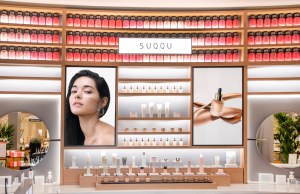 “One is taught auto-massage techniques, allowing you to take care of yourself at home,” Royère said.

Beside service, the two other axes on which this department is built are “specialist” and eco-conscious brands.

The specialist brands include Laura Mercier, Bobbi Brown, Nars and By Terry. These migrated from the ground-floor beauty department.

“Each one has a role to play,” Royère said. That’s as complexion expert, nude specialist, cult color designer and custom pigment queen, respectively.

They provide services, as well, such as By Terry’s Palette Factory, where people can choose powder pigments and literally compose their own palettes. 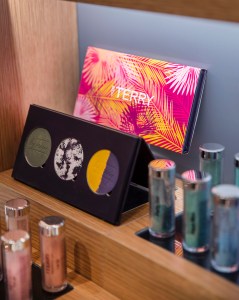 At La Bouche Rouge, it’s possible to pick out lipsticks’ outer tubes and opt to have one’s initials hot-stamped on them.

The sustainable brands decking either side of the department’s entrance are La Bouche Rouge and Kure Bazaar, two “clean” French labels.

La Bouche Rouge, with its rechargeable lipstick, was launched at Le Bon Marché three years ago. Alongside selling its existing line, exclusively at the store it creates made-to-measure lipstick with a technique using a scanner on anything to be color matched, such as an item of clothing.

“It’s really appreciated by our clients for an accessory,” Royère said.

Up next for L’Atelier Maquillage is Charlotte Tilbury, which will settle in the center of the makeup floor with a “Beauty Wonderland” theme by Sept. 15.

For now, that area is lined with alternative beauty brands.

“They respond perfectly to the needs of our clients right before summer, so it made a lot of sense for us to unite some of our favorites in terms of holistic beauty,” Royère said.

These include Sentara Holistic, Odacité and D+ for Care. Also in this section are workshops for people to discover the brands.

“Since we are still under strict sanitary measures, they’re small groups, respecting the rules,” continued Royère.

The executive would not discuss projections, but industry sources believe the new department could boost makeup sales by double-digits at Le Bon Marché, which continues selling color cosmetics from brands such as Chanel, Dior, Giorgio Armani, Yves Saint Laurent and Guerlain on the ground floor.

Royère considers L’Atelier Maquillage as a focal point in Le Bon Marché. “It’s a bit noticeable from everywhere in the store,” she said.

The department’s circular shape was chosen to reflect conviviality and echoes the form of the shoe department one floor above.

There’s a keen eye to design here. The 1,700 jars of pigments decorating the walls were sourced by specialists from around the world. The glazed lava stone counters are the same as in the Beauty Loft, and comfy Tulip chairs were designed by Pierre Paulin.

Each mirror has three light intensities. Hooks are available from which to hang bags, and telephone charging stations are accessible.

Due to today’s strict hygiene measures people may not have makeovers. Rather, they can learn how to apply products using a mirroring technique, by which they imitate what the beauty advisers are doing.