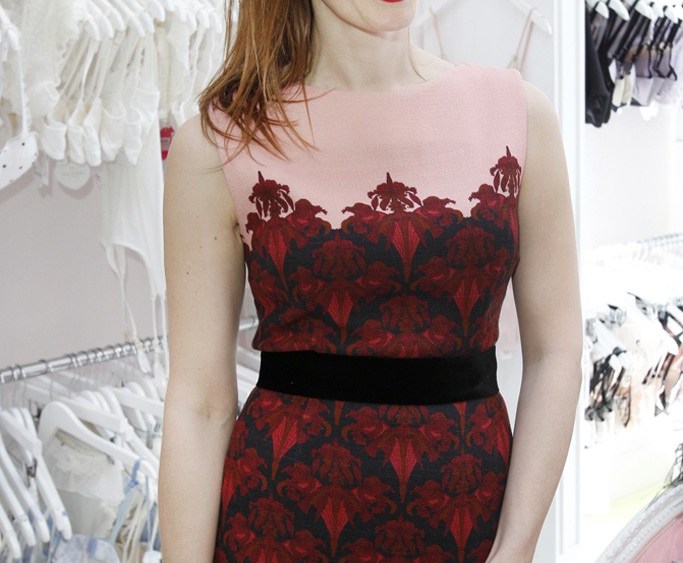 For Goldwyn, the granddaughter of movie-studio founder Samuel L. Goldwyn and actress Frances Howard, Hollywood glamour runs in her blood. She is also a lingerie expert, having created a book and an HBO documentary on burlesque, both called “Pretty Things.”

For MAC, which supported “Pretty Things” in 2005 by creating the makeup look for Goldwyn and the other performers in the film’s finale, she was a natural choice to create lingerie-inspired accessories — the company’s first foray into bags.

“I was looking for the perfect makeup bag with a classic boudoir look when I saw John Demsey [group president of MAC’s parent, the Estée Lauder Cos. Inc.] during Oscar week in 2011. I asked him why they weren’t making any, and he said, ‘Why don’t you do it?’” recalled Goldwyn.

She used a pair of vintage leopard-print panties, plus laces and nets from her own collection, as the inspiration for the bags, which feature pastel satin exteriors covered in leopard-print plastic and matching interiors lined with lace-print plastic. “I like that good-bad duality, and they’re both pretty and durable. I travel constantly and have been road-testing them for nine months,” said Goldwyn, whose signature adorns the “L Goldwyn for MAC” labels.

Goldwyn, who once worked for Shiseido, has several high-end fashion projects under her belt, including a jewelry line bearing her name that sold at Barneys New York, Collette and Joyce, and one for a high jeweler whose name she can’t divulge.

“What I love about this project is that it allows me to design something that’s beautiful and accessible,” she said of the bags, which range from $39.50 to $49.50 at retail, including the brushes, eye and lip products that come in the smaller bags.

Goldwyn is also designing screen printed T-shirts and hoodies for skate brand Altamont that hit stores next month. The graphics are inspired by pin-up girl art, although Goldwyn said she doesn’t mind “if some teenage guys just think it’s old and cool-looking.”

Looking ahead, Goldwyn is also adapting “Pretty Things” into a musical, beginning preproduction of a biographical documentary filmed abroad, and hoping to design her own line of fashion stockings and tights with a vintage flair, of course.

She noted, “I like the idea that you can infiltrate the masses but put a piece of education or history on it.”