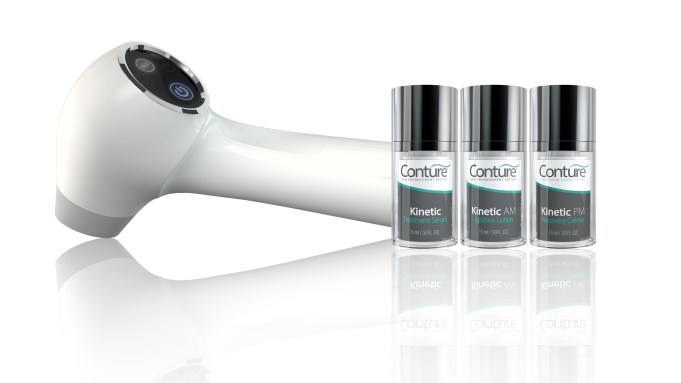 From mass to class retailers and makeup to skin care, the company rooted in airbrush foundation is bulldozing across the beauty spectrum. Its prestige skin-toning device Conture has broken into the online businesses of Saks Fifth Avenue, Bloomingdale’s and Nordstrom, while its affordable spray-on cosmetics line Bairly Sheer is blanketing a broader base of outlets such as Amazon, Rite Aid, ulta.com and target.com.

“We quietly do a huge amount of business. The scale of the business we do in cosmetic areas exceeds very popular brands that women are familiar with and engage with every day,” said chief executive officer Sean Mehta, divulging Luminess’ revenues top $100 million annually, “but we think a little bit differently in everything that we do. You walk into a department store, and it’s all the same stuff in different packaging. What we are doing is retooling and reimagining cosmetics in a smarter and more modern way. This is not your grandma’s or mom’s makeup.”

As it boosts its product portfolio, the smooth airbrushed finish and the technology that goes into producing it remains at the heart of Luminess’ offerings. Even the advanced skin-care tool Conture, which would seem to the casual observer to be a departure from airbrushed makeup, is driven by air compression and low-frequency vibrations. Designed for the face, neck and décolleté, Conture is paired with Kinetic Treatment Serum for $249.

With Conture giving Luminess a foothold at high-end stores, Bairly Sheer is stretching the company into the mass market. It’s intended to delicately deliver the uniform coverage of airbrushing without the cost of Luminess’ airbrushing equipment that surpasses $100. Bairly Sheer’s extensive range of products priced at $12.99 each spans foundations, blushes, bronzers, mists, makeup sealants, setting powders, sponges, brushes, and body shimmers and cover-ups.

“When you spray conventional spray-on foundations out of a can, a lot of product rapidly comes out, and it gets messy. Airbrushing is all about control, and putting out product in a more reliable, even and blendable manner,” said Mehta. “Aerosols have been around, but, in developing Bairly Sheer, we have taken our airbrush learnings to introduce a lighter, more blendable and controllable form of aerosol.”

“What we are seeing is smarter and smarter cosmetics appliances. Epic2 takes technology that can seem very intimidating to an everyday consumer and simplify it for them to ease them into doing airbrushing,” said Mehta. “Education is important, and we see Epic2 as a way of being able to connect with the consumer, and to send a makeup artist home with her so she can learn.”

Partially because airbrushing machines require considerable education, Luminess has relied on infomercials to tell its story. According to Mehta, it spends $45 to $50 million per year on advertising primarily on television spots. The direct-to-consumer strategy has been effective at fueling an annual sales growth rate of 35 to 40 percent for Luminess, but the company is increasingly refining its media messaging and focusing on retail as consumer eyeballs shift to smaller screens.

To reach younger customers than the usual infomercial viewers, Luminess is launching a digital campaign aimed at coming-of-age acne sufferers. “Millennials and high school girls aren’t watching as much television, and we are growing in the digital space, where we can tailor [ads] to them,” said Mehta. “With the infomercials, you cast a wide net and solve a broad array of problems. We are now interacting in a more specific, targeted manner. Instead of focusing on airbrushing being great for everybody and all types of skin, with our student program, it is about sensitive or acne-prone skin.”

Already distributed at shopping destinations as varied as Sally Beauty Supply and HSN, products from Luminess are set to spread into additional stores. Mehta suggested the company is gearing up for a major retail push next year. “For us to connect with a wider demographic, we have to expand beyond infomercials and that’s into retail and also internationally,” he said. “There are very large, very successful companies that have done incredibly well in the direct-response space, but that’s not enough for us. We are on a mission here. We want to make every woman look as beautiful as she can look.”